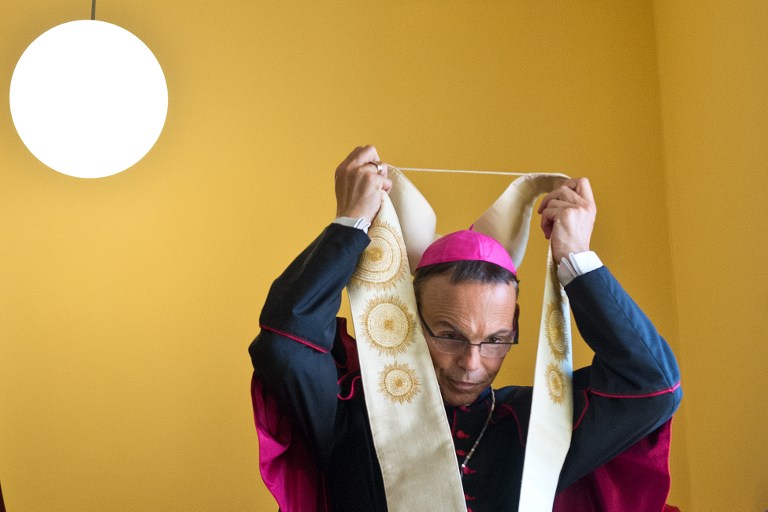 Germany's bishop Franz-Peter Tebartz-van Elst, at the premises of a Children's Day Nursery in Frankfurt am Main, Germany. The embattled "bling bishop" has settled a court case over lying under oath with a 20,000-euro ($27,000) payment.

Sueddeutsche Zeitung citing an internal church report expected to be sent to Pope Francis on Wednesday claimed that "millions of euros" from a charitable church foundation were diverted and funneled into the construction project in Limburg, western Germany.

Costs for the bishop&39;s residence have come to more than 31 million euros (42 million dollars) -six times the initial estimated cost of construction.

Insiders told Sueddeutsche Zeitung costs could now spiral to up to 40 million euros.

According to the church report, the diverted funds - donations from Catholic workers - were originally earmarked to help poor families.

Tebartz-von Elst and his team reportedly developed an intricate system and put pressure on diocese employees to keep their elaborate plans for the bishop&39;s residence secret.

Tebartz-von Elst, referred to by the international press as the "bling bishop," was suspended by the Vatican in October.

According to the church report cited by the newspaper, Tebartz-von Elst sees no need to tender his resignation and remains convinced of having made only relatively minor mistakes.

The 54-year-old was accused of giving false statements in two public affidavits about expensive flights he took to India to visit poor communities in 2012.

After Hamburg prosecutors agreed to a settlement payment of 20,000 euros (27,400 dollars), the case was put on hold in November and ultimately terminated in late December.

German prosecutors have since closed their court case against Tebartz-von Elst.

The cleric has been living in a cloister in southern Bavaria. It remains unclear whether he will return to his diocese in the state of Hesse.