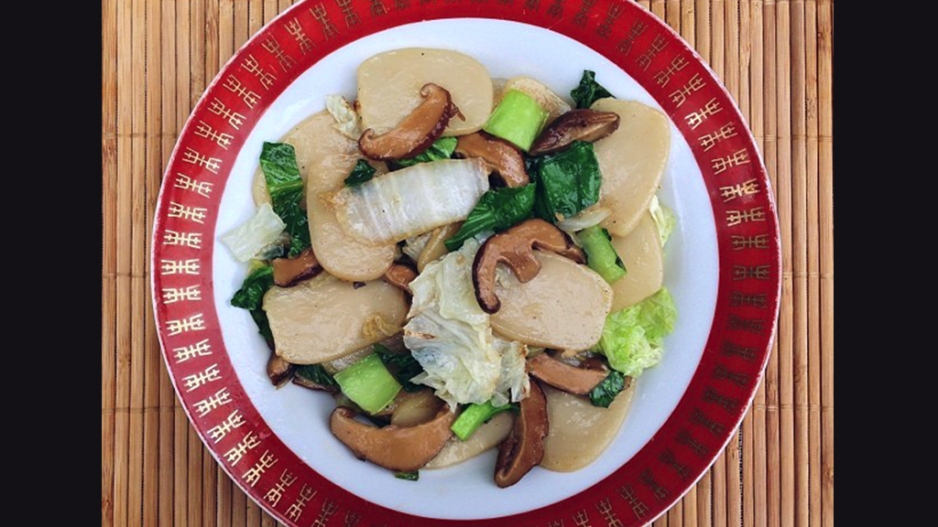 Rice cakes are made of glutinous rice flour, which gives it its chewy and al dente texture. In Hokkien (the Taiwanese language) we call this texture QQ, pronounced the way you’d say it in English.

There are two versions of Chinese rice cakes, the sweet version being more popular during festivities, and the humble savoury version. The recipe I’ll be sharing with you for this Chinese New Year (Year of the Horse) is a savoury one.

This recipe’s highlight ingredient is, obviously, the Chinese rice cakes. They look like flat white oval slabs that require overnight or even more hours of soaking before cooking. If they’re not soaked, they won’t cook through all the way to the centre. The vacuum-packed version is usually better quality, but it doesn’t have as long a shelf life as the dry ones. The dry version keeps for about a year, which makes it perfect to keep as a cupboard staple. You can purchase this at any local Asian supermarket.

This is one of my favourite mushrooms. The shiitake mushroom is full of flavour and quite the healthy &39;shroom. This fungus has been used medicinally by Asians for more than 6,000 years. This exotic mushroom has a meaty texture and a smoky flavour that brings out the flavours in other accompanying ingredients.

Since I was a tiny tot, my family fondly called this leaf vegetable Spoon Vegetable due to the shape of the leaves. Bok Choy is part of the cabbage family, and found in all sorts of dishes and boasts a myriad of health properties. The list seems endless, but the main benefits include Vitamin A, C, K, B6, as well as calcium, magnesium, potassium and iron.

This type of cabbage has a sweeter flavour than most cabbage, and it’s also used in quite a wide variety of dishes. It’s probably more popular than Bok Choy, as it’s used in fillings for dumplings, and eaten raw in salads. 100g of fresh leaves contain a mere 16 calories, and it’s high in calcium, iron, manganese, potassium, Vitamin C, zinc and more.