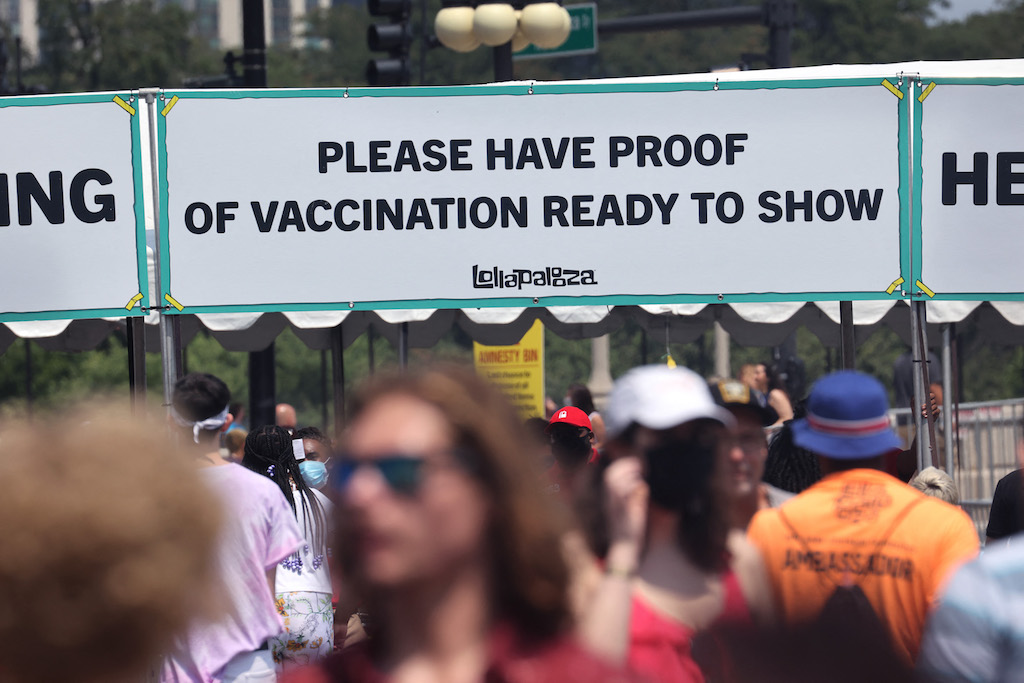 Guests are asked to show proof of having been vaccinated against the COVID-19 virus as they arrive for the Lollapalooza music festival in Chicago. AFP/Scott Olson/Getty Images

CHICAGO - With COVID-19 cases rising and authorities struggling to convince holdouts to get vaccinated, Chicago opened its Lollapalooza music festival to the delight of fans -- and criticisms over potential new spread of the virus.

The return to live music comes as infection numbers swell especially due to the prevalence of the Delta variant, with the seven-day average of daily cases in the United States hitting levels last seen in April.

But for some attendees of Lollapalooza -- which generally draws some 100,000 fans on each of its four days -- the excitement of jamming to a show in person dwarfed fears over viral transmission.

"I'm excited to go to my first concert in two years," Janae Dabney, a 24-year-old librarian from Chicago, told AFP.

She said she plans to wear a mask in crowded areas and hopes others do as well at the event, which will feature performances from the Foo Fighters, Post Malone, Megan Thee Stallion and Miley Cyrus.

"I'm vaccinated so personally I'm not worried, but I hope people take it seriously so that we can have fun," Dabney said.

Organisers said they are mandating proof of full vaccination or a negative test result within 72 hours, along with masks for the unvaccinated.

How such rules will be enforced, however, remains unclear.

The third-largest US city is currently clocking a daily case rate of 130, up 76 percent from last week, according to city health officials.

But Lightfoot on Monday had defended her decision to allow Lollapalooza to move forward.

"If I thought for a moment that shutting down Lolla would prevent further spread in the way that we're seeing it, then I wouldn't hesitate to do that," she said.

"But it's outdoors. We've been having large-scale events all over the city since June without major problems or issues."

Chicago's public health commissioner Allison Arwady however said the festival would "almost certainly" be linked to spread, adding that she was "hopeful" it wouldn't turn into a severe source.

Saying there "almost certainly will be some cases," Arwady told journalists that Chicago was nevertheless "being a lot more responsible than many other settings that are just as large that are gathering around the country."