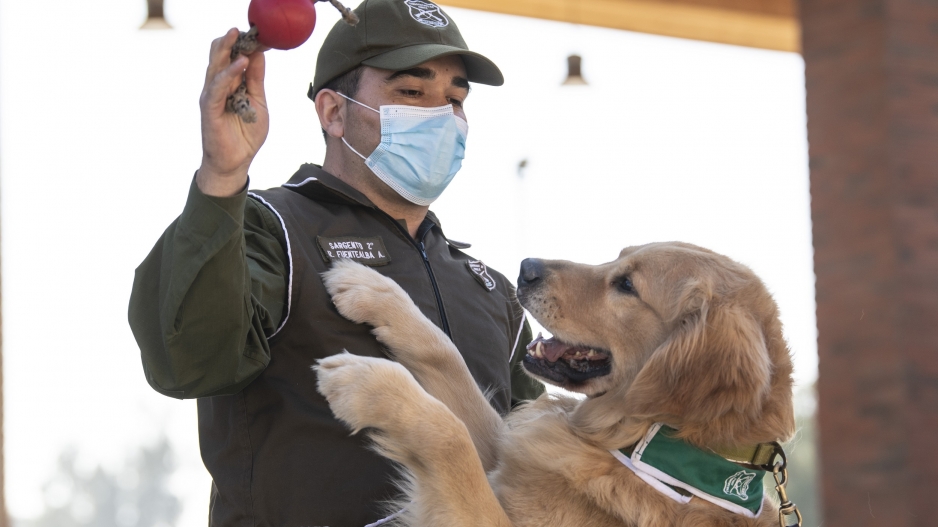 A member of the Chilean Police Canine Training team plays with a Golden Retriever dog named Clifford before the beginning of its training session aimed to detect people infected with COVID-19.

SANTIAGO - Police in Chile are training dogs to detect people that may be infected with the novel coronavirus by sniffing their sweat.

The dogs -- three golden retrievers and a labrador -- are between the ages of four and five. Until now they have been used to sniff out illicit drugs, explosives and lost people, police say.

Dogs have 330 million olfactory receptors, and an ability to detect smells 50 times better than humans. They can also smell 250 people per hour.

READ: Spit, sweat and shaking on it: three sports habits that could change after coronavirus

"The virus has no smell, but rather the infection generates metabolic changes" which in turn leads to the release of a particular type of sweat "which is what the dog would detect," Fernando Mardones, a Universidad Catolica professor of veterinary epidemiology, told AFP.

According to Santelices, tests in Europe and Dubai shown a 95 percent efficiency rate in canine detection of COVID-19 cases.

Canines can detect subtle changes in skin temperature, potentially making them useful in determining if a person has a fever.

According to the World Organisation for Animal Health, the possibility of contagion from a dog is remote.

The canine trainees began their education one month ago, and will use sweat samples taken from COVID-19 patients being treated at the Universidad Catolica's clinic.

The experts hope to have the dogs trained and working in the field by August.