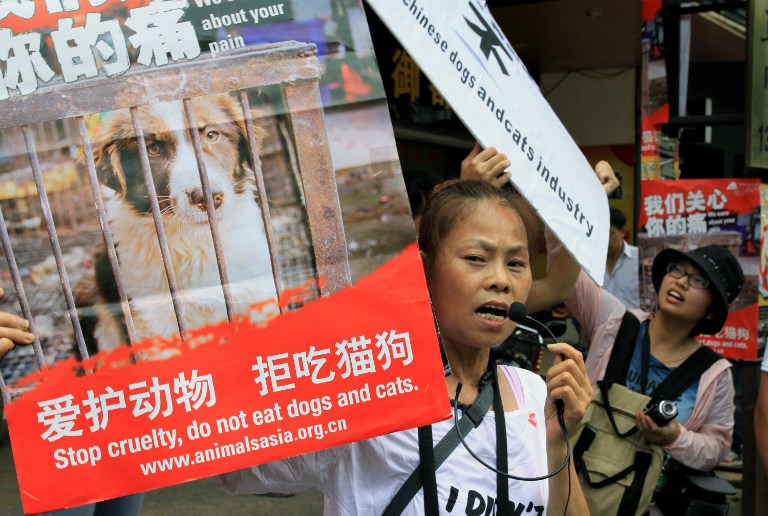 BEIJING - Animal rights campaigners have launched a poster campaign urging Chinese diners to turn down cat and dog dishes, with the group calling for the creatures to be considered "friends not food".

The 279 adverts were put up in 14 cities including Beijing, Shanghai and Guangzhou, Hong Kong-based campaign group Animals Asia said.

Cat and dog meat are not widely eaten in China but can be found at some restaurants, particularly in the south, where they are sometimes considered specialities.

But as the country has grown wealthier pet ownership has increased, and more than 30 million households now keep a cat or dog, according to research group Euromonitor.

Animals Asia appeared to be trying to tap into that growing demographic of pet owners.

One poster showed a small girl sitting with two dogs while a human hand aimed a pair of chopsticks at one of the animals.

"What you just put into your mouth could have been a child&39;s partner in growth," the advertisement read.

"Be healthy. Say no to cat and dog meat."

On its website Animals Asia said the posters, announced earlier this month, aimed to inform the public of health risks from eating cat and dog, and were intended "to prompt people to re-evaluate why they&39;d eat animals they might otherwise consider friends not food".

China does not have any laws to protect non-endangered animals.

The animal rights movement in the country remains small but it is growing, with volunteers banding together to mount rescues of dogs and cats from trucks transporting them to restaurants where they are served as meat.

Around 600 cats stuffed into wooden crates and on their way to such a fate were rescued after a truck crash in January.

A convoy of trucks carrying about 500 dogs to be sold as meat was stopped by volunteers on a highway in Beijing in 2011 and the animals retrieved.

"The truth is, if you eat dog or cat then you have no idea where that meat is coming from or how safe it is," she said on the website.

Numerous abandoned cats and dogs are taken from the streets while pets are stolen and taken to "horrific meat markets", Feng added.

"We believe that, faced with this knowledge, most people would find such a meal entirely unappetising."