Chocolate can be your dog's Christmas nightmare 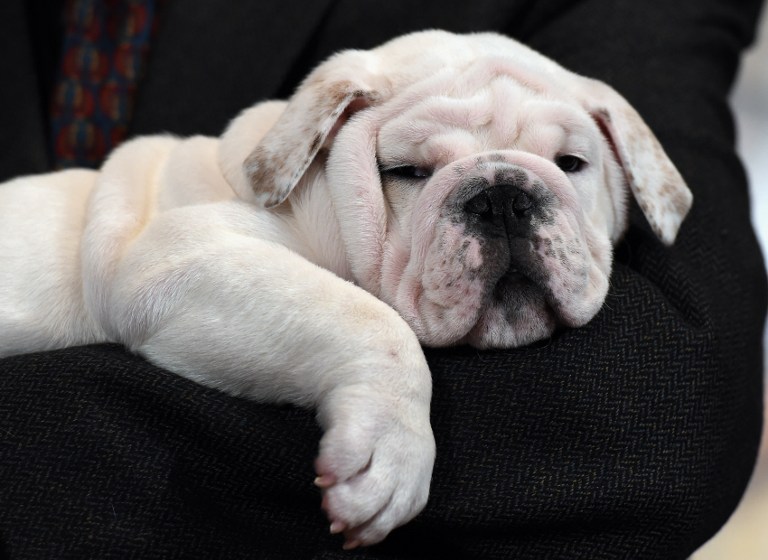 A Bulldog puppy named Winter attends the American Kennel Club's annoucement of the Top Breeds of 2014 at a news conference February 26, 2015 in New York. The Bulldog ranked 4th on the AKC list of 2014 most popular dogs in the US.

There is a significant increase in the risk of chocolate poisoning in dogs over the festive period, our latest study reveals. Chocolate contains a caffeine-like chemical called theobromine that is toxic to dogs (and cats) because they cannot metabolise it as quickly as humans do.

Mildly toxic doses will cause vomiting, diarrhoea, bloating and restlessness, but higher doses will cause hyperactivity, imbalance and tremors. At very high doses, theobromine poisoning can cause seizures, coma and even death. Intoxication can also cause increases in both blood pressure and body temperature. These signs usually become apparent six to 12 hours after a pet has ingested chocolate.

For our study we used data from SAVSNET, the Small Animal Veterinary Surveillance Network, a collection of anonymised health records from a large network of veterinary practices across the UK. This type of research, called health informatics, is ideal for understanding how common particular diseases are in our pets, when they are most at risk, and which animals are most likely to suffer.

Using data from 229 veterinary practices between 2012 and 2017, we identified 386 cases of potential chocolate toxicity affecting 375 individual dogs. In many of the cases, the amount of chocolate consumed was eventually considered non-toxic by the attending veterinary surgeon.

The most common clinical signs reported were vomiting (64 cases), very high heart rate (28 cases) and agitation/tremors (12 cases). Our analysis also showed that younger dogs – less than four years old – were more likely to be brought to the vet with suspected chocolate poisoning. Fortunately, there were no fatal cases in the SAVSNET study.

Overall, dogs were four times more likely to be brought to a vet with suspected chocolate poisoning around Christmas than at other time of year, including Easter, Valentine’s Day and Halloween. The chocolate that dogs ate included Santa Claus figurines, Advent calendars and chocolate oranges. One case involved a hot chocolate drink.

Although rare, chocolate toxicity can be severe and often requires affected dogs to be given an emetic to make them sick. This is very unpleasant for the dog and can be expensive for the owner.

Thankfully, there are things owners can do to reduce the likelihood of chocolate toxicity, especially over Christmas. Owners should make sure everyone knows that chocolate can be poisonous for dogs and put chocolate in places their pets can’t reach.