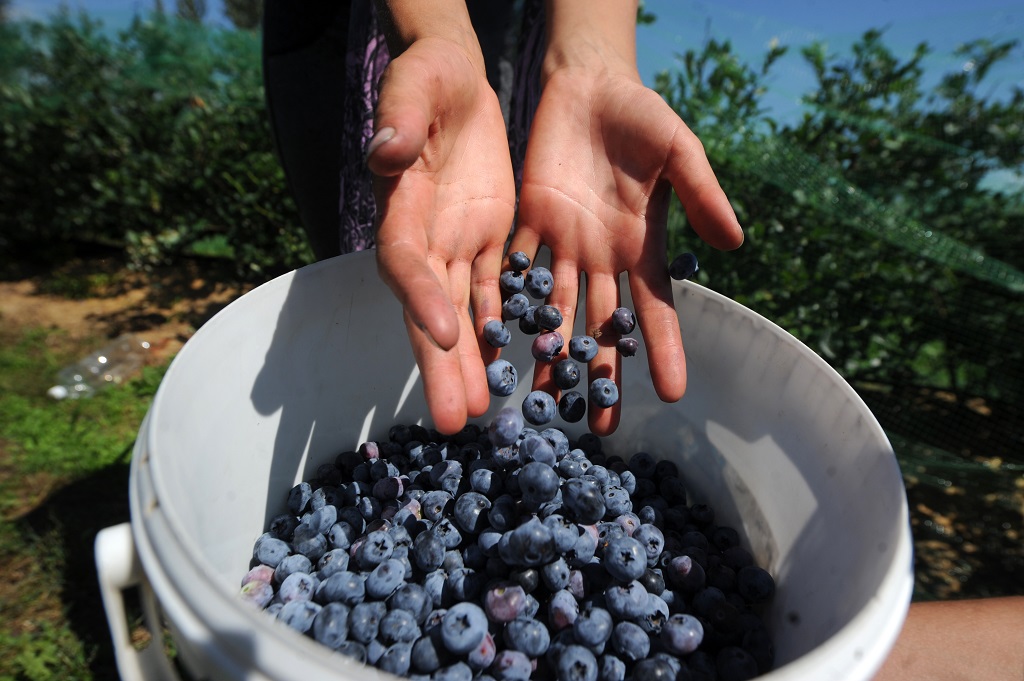 VILLIERSDORP - Floppy hats and face masks on, hundreds of workers carefully pick a bumper crop of blueberries on the sunny slopes of the Groenlandberg, a spur of South Africa's Hottentots Holland Mountains.

Declared a superfood, the purplish fruit has allowed South African producers to sail through the setbacks of the coronavirus pandemic, exporting punnet after punnet of berries all year.

Global demand for blueberries has grown 12 percent a year since 2013, according to the International Trade Centre.

Fuelling the surge are the fruit's well-marketed health properties.

Blueberries are packed with antioxidants -- molecules that combat rogue compounds called free radicals, which are linked to cancer, diabetes, heart disease and other ailments.

Chiltern farm manager Anton Both said business had boomed over the past decade.

Both said farm owners had bought more land to keep up with demand.

More than 600 workers are now needed to pick berries during harvest season.

In the valleys below, other farms have followed suit, ripping up historic apple orchards and strawberry fields, replacing them with rows of net-covered blueberry bushes.

The investments have helped South Africa's blueberry production rise 40-fold over the past 12 years -- a whopping 24,000 tonnes are projected to be harvested this year alone, according to the South African Berry Producers Association, also known as BerriesZA.

More than 90 percent of the country's blueberries are sold abroad, mainly in Europe and Britain.

The record 2020 harvest is expected to rake in more than R2-billion - a blessing for an economy that was already staggering before it was hit by coronavirus.

READ: Potatoes deserve to be a part of the super-food family

According to official figures, South Africa's gross domestic product collapsed by an annualised 51 percent in the second quarter of 2020, and more than 30 percent of the workforce is unemployed, the highest level since 2008.

"We are closer to Europe and the UK than (competitors) Peru or Chile," she added. And South Africa's blueberry production was counter-seasonal to its export market.

While South Africa is still dwarfed by blueberry producing giants such as the United States and Canada, Schutte said producers were vying for markets in China and South Korea that would further expand the industry.

"We expect international demand to increase as awareness of this superfood grows," she told AFP.

Most of the country's blueberries are grown in the Western Cape province, also home to rolling vineyards and the coastal city of Cape Town.

More than 2,700 hectares (6,700 acres) are under blueberry cultivation in the fruit-growing Western Cape belt, a 10-fold jump from five years ago.

The crop also has a higher return on investment than most other fruit, he added, although it requires more start-up capital.

Despite the boom, agricultural economist Wandile Sihlobo said the value of blueberry exports remained tiny compared to other crops such as maize, soybeans and citrus.

"Berry (production) has not reached a volume at which you can worry about oversupply," Sihlobo told AFP.

"It's not a discussion we would be having about these crops for at least the next decade."

At home, blueberries are just as popular and feature in tasty recipes.

Toich also freezes them for use in purple swirl ice creams and smoothies.

"When they are ripe and fresh they are really dark and have a sort of gooey, silvery look," she said.

The fruit also inspires her painting.

Toich recently posted a blueberry pavlova painting on her Instagram page and touts the health effects of the superfood to her social media followers.

"When I eat a whole bunch I don't feel bad," she said.