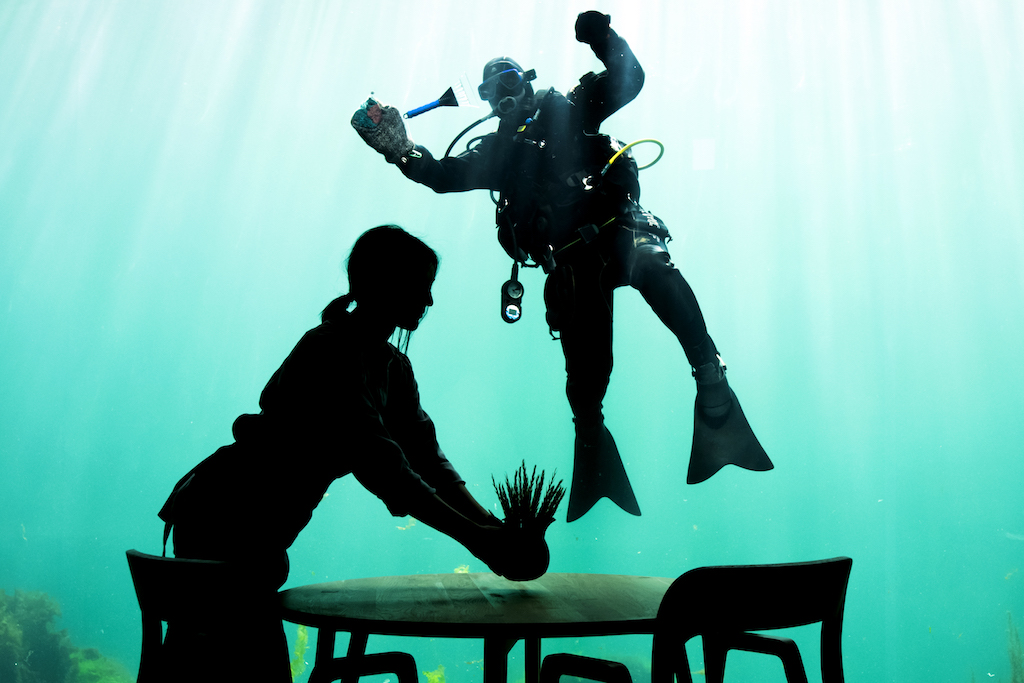 A diver cleans the outside of a viewing window of Under, a restaurant that is semi-submerged beneath the waters of the North Sea in Lindesnes near Kristiansand.

LINDESNES, Norway - For the chef and diners alike, each meal beneath the waves at Europe's first underwater restaurant is a thing of wonder.

"We have this small window next to the kitchen and every time some special kind of fish comes by, I always start thinking about how it would taste," says chef Nicolai Ellitsgaard.

The aptly named new restaurant Under opened a few weeks ago in Lindesnes on Norway's southern tip.

It serves up Poseidon's delicacies in an architectural showpiece that stretches down five metres underwater, offering a unique close-up of ocean life.

From the outside, the giant concrete monolith juts out from the craggy shoreline, while its other end tips down into the North Sea.

The 36-square-metre window -- "like a sunken periscope" in the words of its designers -- offers a panoramic view of the ever-changing live aquatic show.

There are no clownfish or sharks, like at other underwater restaurants in more tropical locations such as the Maldives or Dubai.

Rather, it is in this simple, but no less spectacular forest of kelp that cod, pollock and wrasse swim past depending on the season, with occasional visits from their predators, seals and the large seaducks, eider.

In addition to its distinctive architecture and fine dining, Under wants to shine a spotlight on environmental issues.

The international waiting staff are trained to provide guests with information about the aquatic show they are watching.

"The guests are on an adventure. They are exploring nature themselves because this is not an aquarium.

"The fish might look at us as an aquarium because what's happening outside here is under natural control," Rafoss says.

"You will never be disappointed, nature is never disappointing."