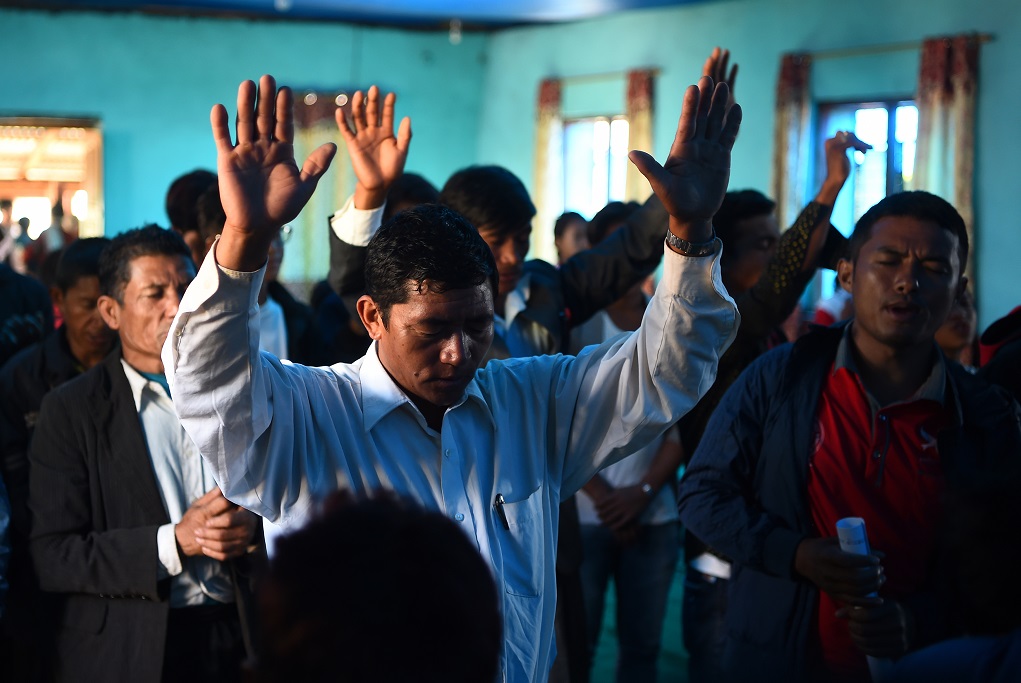 In this photograph taken on 8 October 2017, Nepali Christians take part in a church service in Lapa village in Dhading, some 100 kms northwest of Kathmandu.

RICHET - More than two years after an earthquake flattened the Nepali village of Richet, most residents are still living in makeshift shelters. Only the church has been rebuilt -- paid for by Christian missionaries whose influence in the mainly Hindu country is growing.

Despite strict laws that ban religious conversion, Christianity has spread rapidly over the last two decades in Nepal, where many see it as an escape from the deeply entrenched caste system.

The Himalayan nation was ruled by a Hindu monarchy for over two centuries until the overthrow of the monarchy in 2008 and also has a strong Buddhist tradition, particularly in the mountainous north.

But the remote Lapa Valley where Richet is located is now predominantly Christian.

Many residents are recent converts to the faith, among them Rika Tamang, who became a Christian after his mother fell ill and the family struggled to pay for the animal sacrifices a local shaman encouraged them to make.

"Whatever I had, I had to offer as a sacrifice to god," said Tamang, now the pastor of his village in the Lapa Valley.

"Once I converted to Christianity I didn&39;t have to make sacrifices. I was relieved of that burden."

According to the 2011 government census, Christians make up less than 1.5 percent of Nepal&39;s population of 29 million.

But Christian groups estimate the number at more than 3 million. Locals said the census tended to classify people by the faith associated with their family name, meaning many converts were excluded.

Richet is in the northern district of Dhading, one of the first areas where Christianity took hold. It has since spread throughout the country through an active network of evangelical churches.

But some say well-funded foreign missionaries are using aid to convert people in the impoverished country.

In Richet, the dust had only just begun to settle from the powerful earthquake in April 2015 when a group of South Korean and Singaporean missionaries turned up.

They surveyed the damage and left. A few months later bags of cement arrived to rebuild the village&39;s church.

It was the same story in the nearby village of Kachet, where a new church paid for by South Korean missionaries was nearing completion when AFP visited recently.

"We are happy that we don&39;t need to be under the sky when we go to church for prayers," said Richet resident Aman Tamang.

"But we would be happier if we had got grants for rebuilding our homes as well."

Prashant Tamang, a community leader in the nearby village of Borang that has clung to its Buddhist heritage, said the selective distribution of aid had created tensions between communities.

"Dispute arises sometimes when Christians pressure poor people to adopt their religion by helping them in the time of need," he told AFP.

Proselytising has long been illegal in Nepal.

But a new criminal code that will come into force in August 2018 increases the potential jail sentence from three to five years and states that foreigners sentenced for the crime will be deported after serving their time.

Activists say it seeks to curb the rapidly growing Christian community, and have drawn parallels with Pakistan&39;s strict blasphemy laws, which are often used to stir mob violence against minority groups.

"We have seen how that has played out in Pakistan. If you have inadequate safeguards then the laws in Nepal can be misused as well," said Steven Selvaraj, South Asia expert with the UK-based Christian Solidarity Worldwide advocacy group.

Nepal&39;s growing network of evangelical churches continues to draw people, and many are concerned that the new law could be used against them.

"The church in Nepal is taught in a way that all believers are taking the commandment of Jesus Christ to go out and tell others about Jesus," said Tanka Subedi, a Kathmandu pastor.

"So there is quite a big risk that they may be arrested and given trouble, put in jail and also fined."