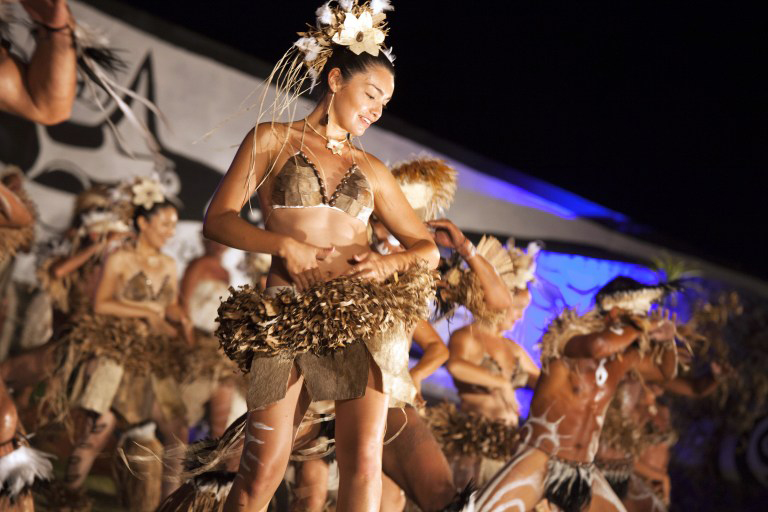 People take part in a dance contest in Hanga Roa on Chile's Easter Island (or Rapa Nui as its inhabitants call it) in the Pacific Ocean on February 10, 2015.

HANGA ROA - Far from home on Chile&39;s Easter Island for Carnival festivities, one middle-aged American woman throws caution to the wind. Stripped down to a thong, she lets a local reveler paint her chest.

"If someone had told me I would end up walking down the street almost naked, I would never have believed it," the woman, who only gave her first name Susan, told AFP.

Susan is one of a few thousand tourists who joined the Pacific island&39;s 9,000 residents for Tapati, an exuberant mix of music, dance and traditional sports that takes place for two weeks every February.

In the island&39;s only town Hanga Roa, revelers wait in a long line under the blistering tropical summer sun to take part in a time-honored ritual -- a plunge in an old tub filled with clay.

A man known as Ale then spreads with his hand this reddish-brown natural paint on the bodies of other locals -- and any tourist ready to participate.

Then, other lines form in front of tubs filled with white and yellow paint.

It&39;s time for the Rapa Nui -- the Polynesian word for both the island and its residents -- to paint symbols, inspired by the local Birdman legend, or characters from the long-lost Rongorongo system of writing.

Shortly after 5:00 pm, a warrior blows into an enormous shell, signaling the start of the nightly parade, which features colorful floats and dancers in elaborate costumes, not unlike the massive Carnival celebrations in Rio de Janeiro.

The Tapati festival is at once a test of masculine strength and feminine grace celebrating Polynesian pride.

Easter Island is at the southernmost point of the so-called Polynesian Triangle -- a Pacific region with Hawaii and New Zealand at the other corners.

The UNESCO World Heritage Site is famous for its nearly 900 massive stone monuments -- the Moai, carved by the Rapa Nui hundreds of years ago.

Rival teams are locked in an all-out contest to crown a new Tapati queen, who reigns for a year.

Numerous races and other contests take place -- including reed board surfing, underwater fishing, fruit-carrying, a triathlon and horse races -- but the nightly parades and dance competitions are the highlight.

Locals spend months carving out large wooden statues for the parade floats from Eucalyptus trees representing deified ancestors, such as the mystical Moai stone giants or the Birdman.

One night, a man draped in animal skins leads the way on his motorcycle, featuring a bull&39;s skull on the steering wheel.

Behind him, a woman dressed as a mermaid -- her costume made of all-natural materials including a tail taken from a tuna caught just that morning -- poses on a float decorated with huge wooden octopuses.

People originally from the Marquesas Islands in French Polynesia play large pahu drums, while the Rapa Nui prefer horse jaws that make a light sound close to maracas when the teeth hit one another.

Some of the Tapati activities reflect a more Latin vibe taken from Chile -- the elderly do battle to be the accordion king, as young people display their tango skills.

However, the Polynesian dance competitions are fierce.

At the Hanga Vare Vare, the main festival stage in Hanga Roa, dancers sway sensually to the Polynesian drum rhythms.