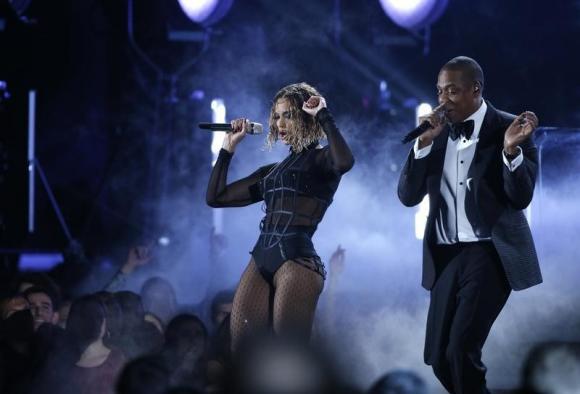 NEW YORK - Music&39;s most famous couple Beyonce and Jay-Z pulled a surprise by releasing a joint album late on Saturday, a long-rumored collaboration that celebrates their marital passion.

The pop diva and hip-hop superstar announced the album, "Everything is Love," from the stage in London as they wrapped up the British leg that opened a global tour.

The album came out afterward exclusively on Jay-Z&39;s fledgling Tidal streaming service and is not available on Spotify - a far larger platform, which Beyonc disses on the album in a string of F-bombs.

The couple also put out an elaborately choreographed video that takes place inside the Louvre museum in Paris for a song off the album, "Apeshit."

The video opens with the couple standing regally in front of the "Mona Lisa" - Jay-Z in a light green double-breasted suit, Beyonc in a lavender pantsuit - and features a squad of scantily clad dancers moving sensually in front of Jacques Louis David&39;s "The Coronation of Napoleon."

Musically, "Everything is Love" marries the styles of the two artists, with songs driven by warm, sultry soul but with a hip-hop delivery.

The album shatters any lingering innocence from the early days of Beyonc, with the singer of "Say My Name" and "Single Ladies (Put a Ring On It)" generous in the details of her sex life with Jay-Z.

The two stars have recorded together before, notably on the Beyonc-led single "Drunk in Love," but the album comes after an especially public window into their marriage.

Beyonc on her last solo album "Lemonade" in 2016 revealed infidelity on the part of Jay-Z, who a year later asked forgiveness on his own album "4:44."

This year, as the title of "Everything is Love" implies, their relationship is apparently swell. On the very first lyrics, Beyonce beckons to her husband, "Let&39;s make love in the summertime."

On the final track, "Lovehappy," the two acknowledge past pain but also their efforts to reconcile.