Buskers take over the V&A Waterfront 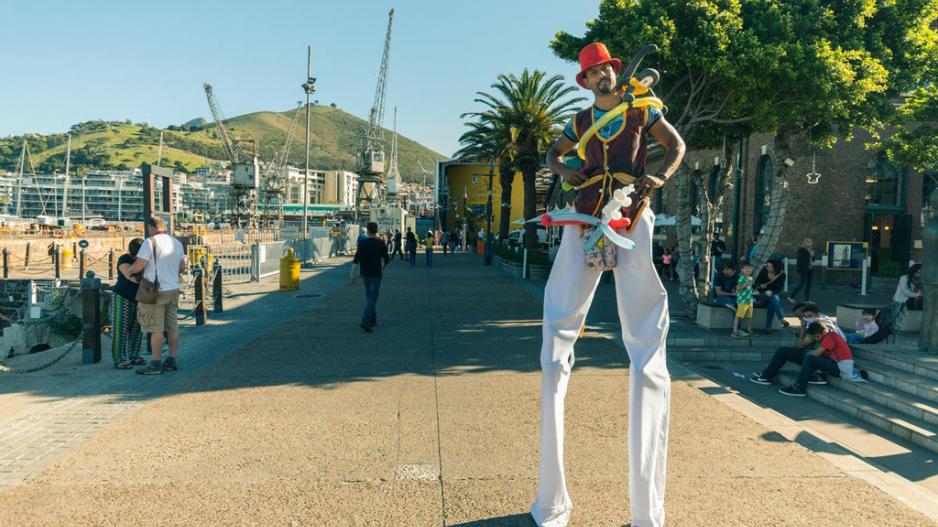 Buskers are a beloved and firmly entrenched tradition at the V&A Waterfont.

CAPE TOWN – The V&A Waterfront will be teeming with all sorts of showmen and showgirls, tricksters and tramps next weekend when it hosts the first Cape Town Buskers’ Festival from 6 to 9 October .

The Waterfront, as the most-visited destination in Africa, has always been a place to people watch and for buskers to interact with the public. Next weekend it will be a paradise for a different kind of people watcher, with a total of 22 international and local acts performing on four stages over the four days.

V&A Waterfront chief executive David Green said: “For our more than 24 million annual visitors buskers are a beloved and firmly entrenched tradition and visitors have come to expect an encounter with these colourful characters.”

Football players, musicians, people-statues, and even a man who juggles chainsaws and children (hopefully not at the same time) will be at the Cape Town Buskers’ Festival, which is part of the National Arts Festival and brings the Cape Town Fringe Festival to a close.

It is sure to be a great day out for young and old. It is also excellent value for money since you pay only for what you like. There is no entry charge to the festival and members of the audiences show their appreciation by putting money into the performers’ hats, which is known as “hatting”.

Anyone who needs a little more convincing should head to Nantes Park in Athlone on Sunday, 2 October, for a pop-up busking festival.

Between 1pm and 3pm performers – including the Soccer Freestylers, guys doing amazing tricks with soccer balls; Owen Bravo the joke-telling juggler; and the Hlanganani Marimba Band – will be putting on a show and hoping spectators will laugh, clap, gasp, maybe even cry, and be moved to show their appreciation by filling their hats with coins and notes.

“It is also one of the oldest forms of theatre, but, in South Africa, it’s not always accorded the same respect as other performance arts,” he said.

The festival has invited some international acts to add variety to the programme but local street performers are expected to dominate.

The inaugural festival’s line-up includes Canada’s Dynamike, “a loveable chap who can juggle chainsaws and children”, and Diego, a Charlie Chaplin impersonator from Argentina.

For the budding buskers there will be a workshop by Stuart Every, owner of Dolphin Creative, who represents buskers and busking festivals internationally. For more info visit www.ctbuskersfestival.co.za