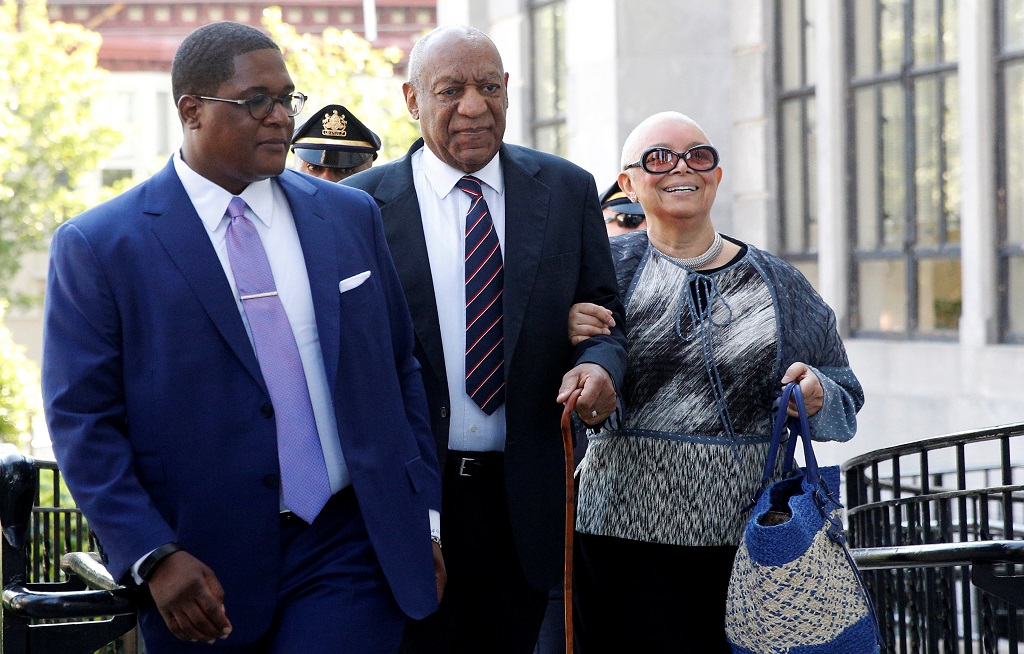 Actor and comedian Bill Cosby arrives with his wife Camille for the sixth day of his sexual assault trial at the Montgomery County Courthouse in Norristown, Pennsylvania, U.S. June 12, 2017.

NORRISTOWN - Lawyers for Bill Cosby demanded that a judge declares a mistrial in the entertainer's sexual assault case on Friday, complaining that jurors were essentially rehearing the entire week of trial testimony as their deliberations passed the 45-hour mark.

Montgomery County Court of Common Pleas Judge Steven O'Neill rebuffed the argument, saying he could not stop the jury as long as it was willing to continue mulling whether the 79-year-old comedian was guilty of drugging and sexually assaulting Andrea Constand at his suburban Philadelphia home in 2004.

"I have no ability to do anything other than what I've done in this case," O'Neill told Cosby's lawyer, Brian McMonagle.

The judge also appeared angered by what he called a public misperception that there was a time limit on deliberations, which he suggested was fueled by statements from Cosby's spokesman, Andrew Wyatt, on Thursday night urging O'Neill to end the trial.

The star of the 1980s TV hit family comedy "The Cosby Show" faces similar allegations from dozens of women, though only Constand's led to criminal charges. Cosby has denied all of the claims.

The jurors told O'Neill on Thursday morning they were having trouble reaching a verdict on any of the three counts he faces, prompting the judge to give a standard instruction that they should keep working.

McMonagle has made at least five mistrial motions based on the length of the jury deliberations, according to O'Neill, who until Friday afternoon had held all discussions with the attorneys out of public view.

O'Neill told the defence that until the jury says it is still deadlocked, there was little he could do but provide them with any evidence they request.

The jury's latest note, the ninth they have sent since deliberations began Monday evening, asked to rehear trial testimony from both Constand and her mother, Gianna.

Earlier on Friday, the jurors reviewed portions of the sworn depositions Cosby gave during Constand's civil lawsuit in 2005 and 2006, when he described the night in question.

Cosby did not testify at the trial, but the jury heard a police interview with him from 2005 as well as his depositions.

A hung jury could represent a clear victory for Cosby, allowing him to avoid what might have been years in prison for three counts of aggravated indecent assault.

But O'Neill asked the comedian on Friday whether he understood that a hung jury could also allow prosecutors to retry him.

Constand was the prosecution's key witness, telling jurors that Cosby gave her three unidentified pills before taking advantage when she was disoriented to sexually assault her.

Cosby's lawyers sought to discredit her by pointing to discrepancies between her testimony and statements to law enforcement in 2005, when she first reported the incident a year after it allegedly occurred.