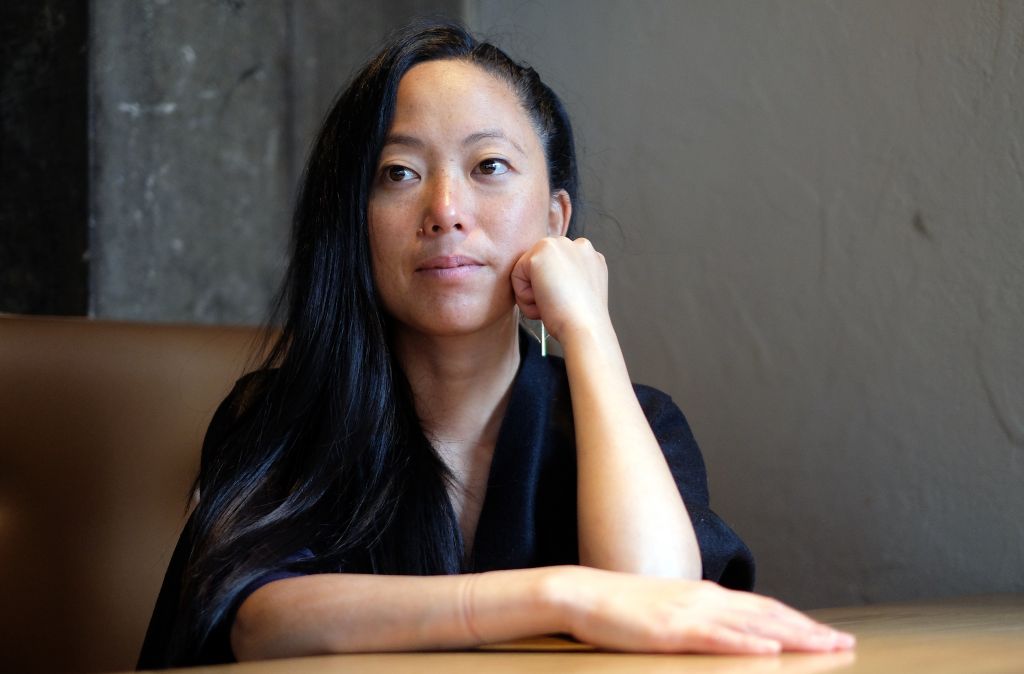 Peruvian Composer and performer Pauchi Sasaki poses for a portrait following an interview with AFP on December 12, 2017 in New York. She wore a dress made of 100 speakers in a performance at New York's Carnegie Hall as a way to express humanity.

NEW YORK - Wearing a dress made of 100 speakers might seem to be a fashion statement. But for composer Pauchi Sasaki, the aesthetic goes deeper -- it is a way to express humanity.

The Peruvian artist and chosen protg of Philip Glass, one of the world&39;s most influential living composers, had first covered herself with amplification equipment when she played her violin in the ancient Pachacamac temple near Lima and found herself without an electrical outlet.

She has since developed the concept into the "speaker dress," a shoulder-to-knee wall of 100 speakers the size found on shelf stereos, and made it an instrument itself.

She performed on speaker dress as she recently premiered her latest piece, "GAMA XVI," in the presence of Glass at New York&39;s Carnegie Hall.

"I realised that it had a very iconic power and people want to reduce the object and say, &39;Oh, that looks cool,&39;" Sasaki said of the speaker dress.

"But I really wanted to bring out the spirit of the instrument because every instrument, like a violin or a piano, has a spirit," she told AFP.

The speaker dress does not in itself have an acoustic capacity; it is connected to programming by Sasaki.

Yet she plays it with pitch, tone and intensity variations like a classic instrument, with a mouthpiece or physical touch triggering software, which in turn sends back processed sounds to speakers on her body.

She finds the layer of computerisation especially apt for the 21st century, when so many human experiences and interactions are filtered through smartphones, speakers or other technology.

"I don&39;t create an object that makes things; I build extensions for human gestures," she said.

"I want to be able to deliver nuances through the instrument. And what I mean with that is that human emotion is not only about randomness or about will, it&39;s also about fragile moments, it&39;s about doubt and it&39;s about strength -- a wide range."

The speaker dress was all too real the first time she performed it -- her hair caught fire. She has since fine-tuned the wiring and is confident about its safety.

Sasaki has composed film scores in Peru and worked extensively in Japan, where she traces her ancestry, and had been considering an academic career until a year ago.

Then, under a mentorship program sponsored by luxury watch-maker Rolex, she was selected to spend a year in New York studying with Glass, who interviewed her to make the final cut.

Performing "GAMA XVI," her new work, at Carnegie Hall with the American Composers Orchestra, Sasaki explored not only the physicality of her instrument but also that of her performance.

Sasaki entered the hall from the back, with the initial blurt from the speaker dress causing much of the audience to look around in befuddlement, fearing perhaps that someone had not turned off a cellphone.

Instead, Sasaki slowly made her way to the stage, the electronic sounds and the strings gradually merging together into a nebulous unison, with flickering projections of slender rectangles reinforcing the sense of being in a space out of time.

By the third movement, in a structural nod to Glass, "GAMA XVI" builds into full balance as a melody emerges, a repeating motif inspired by Andean folk music played by violin soloist Tim Fain.

Glass, addressing the audience after the premiere, described Sasaki&39;s compositions as "music that people should hear."

Glass credited his own musical relationship in the 1960s with sitar virtuoso Ravi Shankar as critical to his career. But the 80-year-old composer said he was still figuring out how to be a mentor.

"I suppose that I never doubted her or her talent," he said of Sasaki. "But I doubted my ability to do anything about it."