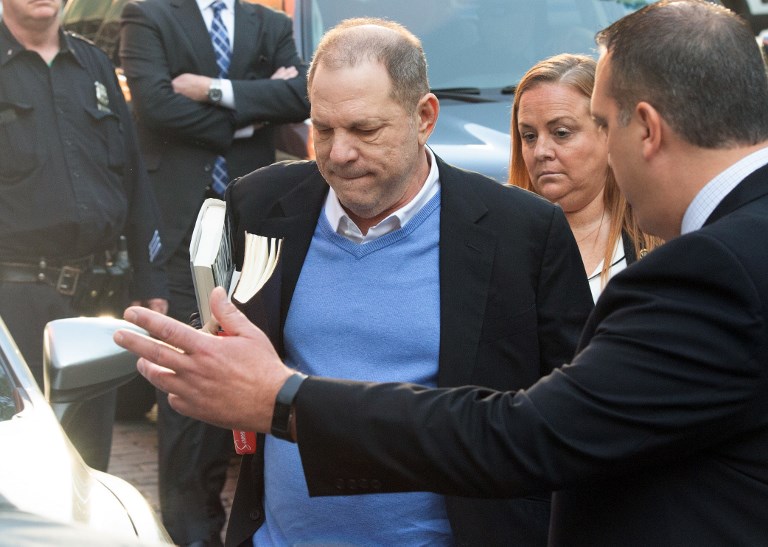 Hollywood film producer Harvey Weinstein turns himself in to the New York Police Department's First Precinct on May 25, 2018, after being served with criminal charges by the Manhattan District Attorney's office.

NEW YORK – Fallen movie mogul Harvey Weinstein is expected to plead not guilty on Tuesday to rape and sexual assault charges in New York, opening a legal battle for the MeToo movement that dreams of seeing him behind bars.

The 66-year-old Weinstein was charged with rape and a sex crime in New York late last month, nearly eight months after his career imploded in a blaze of accusations of sexual misconduct.

Weinstein is due in a Manhattan court at 10 am local time (1400 GMT), for a formal reading of the indictment: he has been indicted for allegedly forcing a woman to perform oral sex on him in 2004, and for allegedly raping another at a Manhattan hotel in 2013. That crime could put him in prison for as many as 25 years.

Two women are named in this indictment. But nearly a hundred have said since October they were harassed or sexually abused by Weinstein over several decades.

That has turned the one-time toast of Hollywood into the catalyst of the MeToo movement and arguably one of the worst sexual predators in recent American history.

Salma Hayek, Gwyneth Paltrow and Angelina Jolie are among more than two dozen actresses who say they were sexually harassed by the producer. A few, including Asia Argento and Rose McGowan, said they were raped.

Benjamin Brafman, Weinstein&39;s lawyer, is one of America&39;s most celebrated criminal defence attorneys. His past clients include former IMF boss Dominique Strauss-Kahn, who escaped criminal prosecution for alleged sexual assault in 2011.

No details about the identity of the two accusers were given by the prosecutor.

Brafman said the rape complaint came from a woman who had a 10-year affair with Weinstein, but the information was not confirmed.

Her story resembles many other reports of unwanted contact from stars such as Ashley Judd or Paltrow.

But especially countless were young unknown or just emerging stars who hoped to see the revered producer make them Hollywood stars.

Evans tells how he spoke of a possible place in his show for aspiring models Project Runway, before forcing her into oral sex, and then went about the day as if nothing had happened.

The prosecutor will still have to prove beyond a reasonable doubt that Weinstein committed illegal acts, and with these two women specifically.

No one, however, expects the lawsuits will be dropped, as was the case for Strauss-Kahn.

Indeed, it is the same Brafman who defended the former IMF director against the same Manhattan prosecutor, Cyrus Vance.