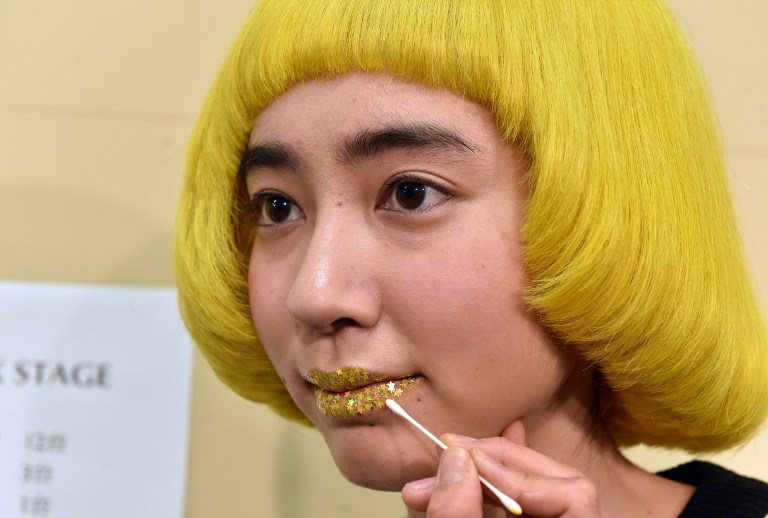 Star-shaped decoration is applied to the lips of a model backstage for a fashion show for the "tenbo" brand, designed by Japanese designer Takafumi Tsuruta, during the Tokyo Fashion Week's 2015-16 autumn/winter collection in Tokyo on March 18, 2015.

TOKYO - Tokyo Fashion Week has long been a platform for edgy Japanese designers -- but perhaps more remarkable is just how few Japanese models grace its catwalks.

Tall, white and often blonde young women dominate the runway, with a foreign look that is now commonplace in Japanese magazines, shows and advertisements.

"It&39;s kind of odd," said 24-year-old Rika Tatsuno, one of the few Japanese models appearing on the Tokyo catwalks, where she reckons she is in an Asian minority of about 10 to 15 percent."Definitely we would like to see more Japanese models."

A lack of racially diverse catwalks is by no means unique to Tokyo, which is vying to compete on the global fashion stage. But its lack of Japanese faces is striking.

In Japan, fashion is divided into "wafuku", or traditional Japanese clothing, and "yofuku", which literally means "Western-style clothing" and is now everyday wear.

While Japanese models are usually chosen to showcase the former, such as kimonos by celebrated designer Jotaro Saito, they have limited opportunities in the latter category -- even when the "Western-style" clothes are Japanese creations that will mostly find domestic buyers.

"It&39;s natural. If I was designing traditional Japanese clothes I would pick Japanese models," said young designer Hiroki Uemura of the "byU" brand, who made his debut at Tokyo this week.

He described his collection as an adult version of the hugely popular "kawaii" style -- the Japanese word for cute or adorable -- but one also influenced by the "mismatched" look of British actress and singer Jane Birkin in her youth.

"I want to show the &39;made in Japan&39; aspect, but the Japanese are attracted to Europe and foreign countries, so in order to promote this brand&39;s image I use foreign models," he said.

Backstage ahead of Uemura&39;s show, a group of willowy blondes sat texting and eating sandwiches while stylists touched up their make-up and curled their hair.

Kali Myronenko, a 20-year-old from Ukraine, first appeared on the Tokyo runway when she was 17 and is now based in the city, where the insatiable appetite for her looks gives her a regular stream of work.

"Japanese people... like this idea of being cute-looking, young, so many Japanese people wear contact lenses with the blue eyes," she said.

She thinks the interest in her appearance is down to a typical yearning for what you don&39;t have, such as curly-haired people desperate for straight hair.

"You don&39;t want to be how you are because you see yourself every day in the mirror," she said.

In Japan that yearning to be different has, as in other Asian countries, led to a robust market for skin-whitening creams, while dyed-blonde hair is not an uncommon sight in the corridors of fashion week, held in Tokyo&39;s trendy Shibuya district.

As spectators filed out of Uemura&39;s show, fashion PR worker Kaori Yasuike said it was not at all strange for her to see blonde Caucasians strutting down the runway, because she sees them all the time in magazines.

"We want to look at someone who we admire as an ideal body type," she said.

In 2014, Vogue Japan featured only three women of colour on 14 covers, only one of whom was of Japanese descent, according to a survey by online forum The Fashion Spot.

In pursuit of their ideal look, Tokyo agents nowadays choose many of their models from Eastern Europe or Russia, according to fashion week casting director Bobbie Tanabe.

He said they were given attractive contracts with flights, apartments and drivers, meaning they cost about twice as much to hire as local models.

Meanwhile, some Japanese youngsters seeking to make it on the catwalk now try their luck in fashion centres such as New York, Tanabe said.

"Maybe using Japanese models can be too realistic for (Japanese designers)," he added.

There is also the issue of Tokyo Fashion Week&39;s global appeal -- it still does not attract the prestigious designer names that show in Paris, New York, Milan or London.

Model Rika Tatsuno, who grew up in the United States, thinks this is another reason designers opt for foreign models.

"They want to branch out internationally and so they can&39;t just target the Asian market," she said, although she suggested Japanese models would help to give "a better understanding of how the clothes would look" on their main domestic consumers.

Ukrainian Myronenko said she would "love" to work alongside more Japanese models in Tokyo, where she finds the job more enjoyable than at shows such as Paris Fashion Week.

"I think it&39;s just the Japanese way that I love, how they treat other people no matter who you are, famous or not famous."