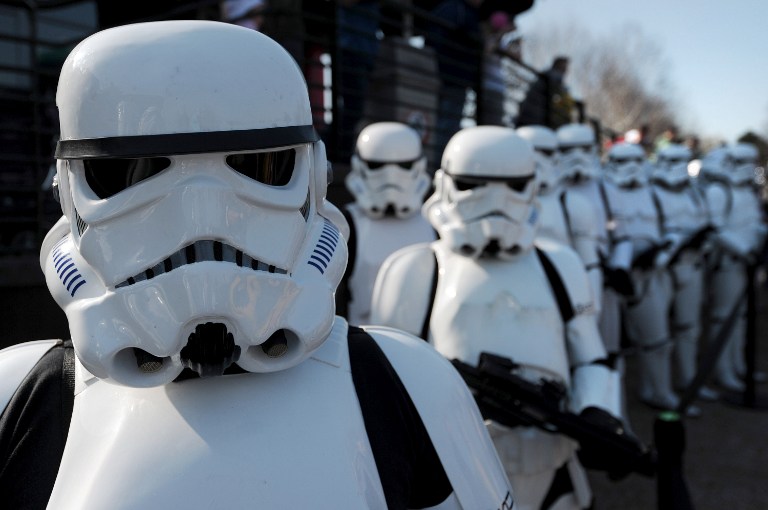 Star Wars Stormtroopers pose for photographers in a queue at Legoland in Windsor west of London on March 24, 2012, to mark the launch of the new Star Wars Miniland Experience.

LONDON - Fancy wielding a lightsaber with Anakin Skywalker amidst the lava of Mustafar? Or how about chilling with Han Solo before stepping onto the Millennium Falcon ship with his Wookiee warrior co-pilot Chewbacca?

"Star Wars" fans can come face to face with the heroes and villains of the sci-fi universe at a new interactive experience at London wax museum Madame Tussauds, which has recreated scenes from one of the most popular movie franchises of all time.

A team of 180 sculptors, hair artists, colourists, set designers and prop makers took more than a year to recreate 11 famous "Star Wars" scenes, including the iconic one when Darth Vader reveals he is Luke Skywalker&39;s father.

The new experience, complete with lightsaber sound and space visual effects, comes ahead of the much-anticipated next instalment "Star Wars: Episode VII - The Force Awakens", scheduled for release in December.

The museum said it had worked closely with Walt Disney Co and "Star Wars" producer Lucasfilm to bring the sets together.

"A figure would normally take around four months to make ... the bigger figures such as the gargantuan Jabba the Hutt took a little bit longer and we did have to create him in a warehouse."

Fans were invited for a preview on Tuesday, ahead of the official opening on May 16.

"I&39;m just over the fourth moon of Endor about it, this is just fantastic," fan Richard Bennett said, referring to a moon in the "Star Wars" universe. "It&39;s like being in the movies, it&39;s like being up close and personal." (1 US dollar = 0.6389 British pound)