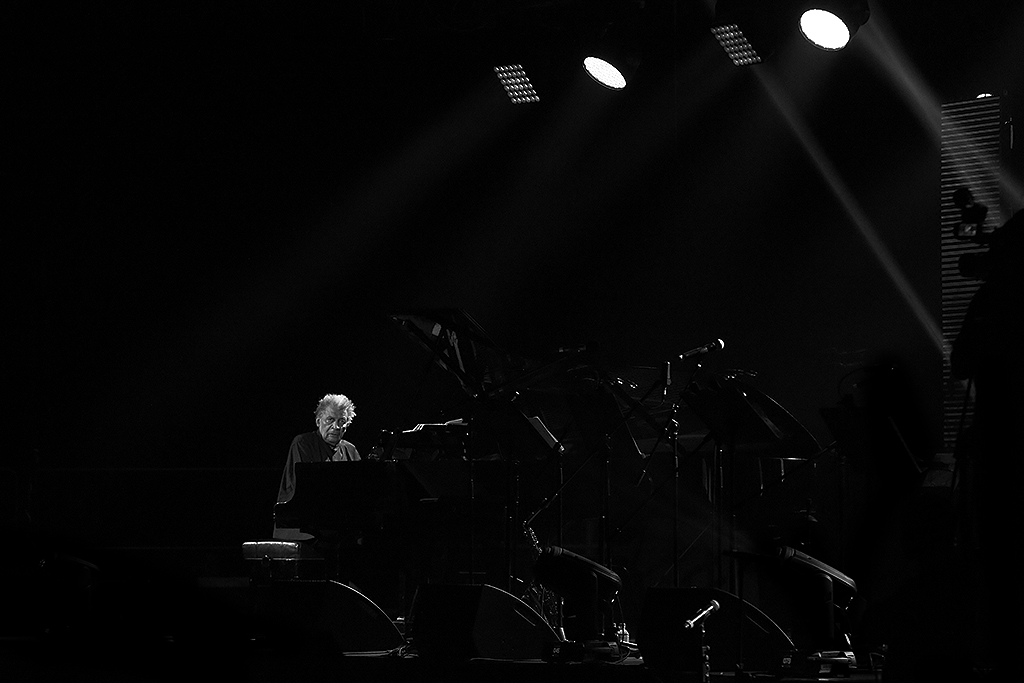 Abdullah Ibrahim of the Jazz Epistles at Emperors Palace on 16 June 2016.?

JOHANNESBURG - The Jazz Epistles held the audience in awe at Emperors Palace on June 15 and 16.

Taking to the stage together for the first time in over 50 years, Abdullah Ibrahim on piano, Hugh Masekela on trumpet and Jonas Gwangwa on trombone took the audience through a time-warp of memories as they referenced their life’s work in the course of the evening.

Solidly backed by Ekaya, who have collaborated with Ibrahim for over twenty years, the epistles had the audience on their feet, cheering and even singing along to Masekela’s ‘Stimela’.

The evening ended appropriately with Ibrahim playing passages from numerous of his works before ensuring the audience left for home satisfied by segueing into eternal favourite Mannenberg (is where it’s Happening).

The Epistles last played together in the early 60’s, before the members went their separate ways, primarily driven out by apartheid’s oppressive laws and the resulting lack of musical opportunities.

Moeketsi  performed with the cast of Todd Matshikiza&39;s King Kong in London, but returned to South Africa before dying penniless. A jazz club in Newtown, Johannesburg, Kippies, was named in his honour.

Gertze, who started out as a highly competent saxophonist before shifting to the double bass, left the country in 1962 and made a name for himself on the European jazz circuit before returning to South Africa in 1968. He died of a brain tumour in 1983.

Ntshoko formed a short-lived band, the Jazz Giants after the break-up of the Jazz Epistles,  before leaving South Africa in 1962. He performed in Europe with the Dollar Brand Trio. In the 70&39;s he formed &39;Makaya and the Tsotsis&39;. He performed with Dexter Gordon, Ben Webster, Mal Waldron and Johny Dyani and, in later years with John Tchicai, Pierre Favre and Irene Schweitzer. In 2014, the &39;bird&39;s eye jazz club&39; in Basel, Switzerland honoured him with a concert to celebrate his career.

Jonas Gwangwa left South Africa in the early 70&39;s before taking a role as musical director for the ANC&39;s cultural ensemble, Amandla, from 1980 to 1990.

He composed the score for the movie, Cry Freedom and performed in 1988 at the tribute concert to Nelson Mandela at Wembley Stadium, England.

Hugh Masekela gained an interest in the trumpet in his youth and was given his first instrument by anti-apartheid activist, Archbishop Trevor Huddlestone. He performed in the Huddlestone Jazz Band in Johannesburg and performed with King Kong before returning to South Africa and playing with the Jazz Epistles. He left the country shortly after the Sharpeville Massacre.

Masekela&39;s &39;Grazing in the Grass’ was a number-one hit in the US in 1968, selling four million copies. His 1987 hit single, &39;Bring Him Back Home&39; a tribute to Nelson Mandela, became an anthem for the Free Mandela movement. He has played with Paul Simon, Antonio Carlos Jobim and Dave Matthews, among others.

Abdullah Ibrahim, who hails from Cape Town, left for Europe in 1962 before moving to New York in 1965 under the guidance of Duke Ellington, who he had befriended after Ellington had seen him perform with his Epistles-based trio - Ibrahim (then still known as Dollar Brand), Gertze and Ntshoko - in Switzerland.

In America, Ibrahim rapidly achieved recognition, playing with many of the leading free jazz exponents of the time, including Don Cherry, Ornette Coleman, Cecil Taylor, Elvin Jones and  Archie Shepp.