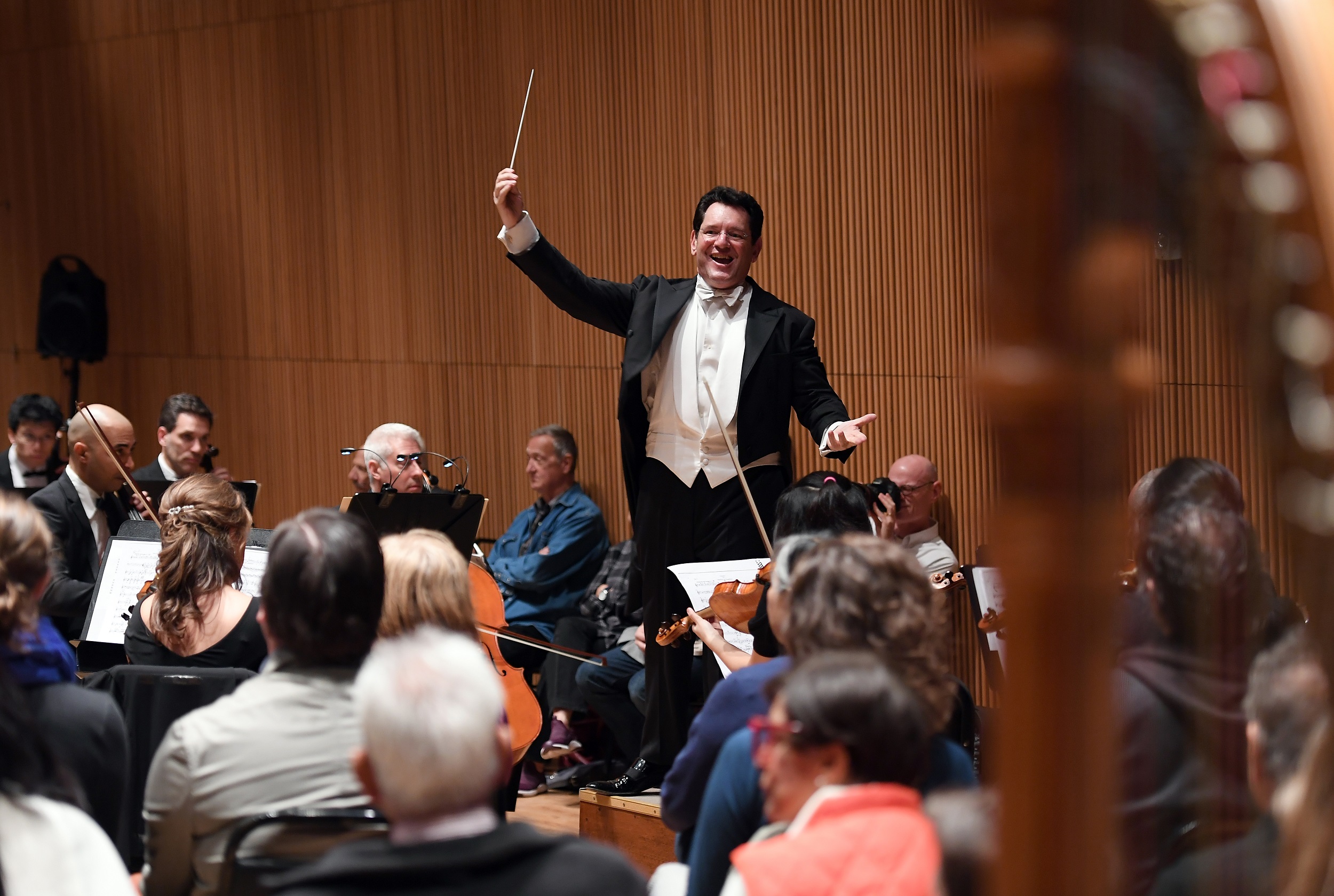 Music director David Bernard has launched a bid to re-envision the traditional orchestra by bringing the audience directly onto stage.

Pondering the question, conductor David Bernard asked something related -- how did he himself become enthralled by the music?

His answer -- it was when he first sat inside an orchestra. And so, he wondered, why not bring that experience to everyone?

Bernard, who leads the Park Avenue Chamber Symphony in New York, has launched a bid to re-envision the traditional orchestra by bringing the audience directly onto the stage. Adding dozens of chairs, the orchestra lets ticket-holders sit among the musicians, following underneath Bernard&39;s baton instead of staring at his back.

"There&39;s a lot of talk about how classical music is stuffy and there are a lot of rules. And that&39;s kind of a deterrent to enjoying classical music," Bernard said in his Manhattan apartment before a recent performance.

"The question is -- how do you turn classical music performance into more of an experience?" he said.

Bernard -- who considers his concept, which he dubs "InsideOut," to be a world first at its scale -- takes his inspiration more from interactive theatre than from concert halls.

Classical music, he noted, has made plenty of attempts to become more experience-driven, but generally by adding components such as visuals, dancers or famous pop artists.

Bernard takes the opposite approach with InsideOut -- stripping the performance down to the music alone, with not even printed programs to distract the guests.

"How do you turn coming to the concert and simply interacting with the music into an experience?" he asked.

At a recent concert, which took on a loose Halloween theme with the ominous sounds of Saint-Saens&39; "Danse Macabre" and Berlioz&39;s "Symphonie Fantastique," dozens of guests were guided onto the stage and then were asked to shift seats, giving them a different vantage point within the orchestra.

"I think this was definitely a more immersive experience, more intimate, and really made it easier to connect with the musicians," said audience member Leana Johnson.

Spectators John and Jennie Doggett noticed a new immediacy in the music. "You feel it in your stomach, especially the bass," John Doggett said.

The concert venue, the DiMenna Center for Classical Music, features an advanced acoustic system that allows adjustments in reverberation, minimizing but not eliminating the imbalances that spectators may hear when sitting closer to certain instruments.

But Bernard acknowledged there could be awkward moments, such as when he as a conductor finds himself looking down at an orchestra space of 300 people, most of them not musicians.

But he said that InsideOut allowed musicians to "perceive and feel the audience reaction more immediately and more clearly" than in a traditional setting.

"So in a way there is an energy that feeds on itself and creates, actually, a more special experience for the musicians," Bernard said.

Violinist Gabrielle Miskovitz said the InsideOut format was at times distracting, with guests shuffling around and shifting in their chairs.

"But it&39;s really exciting and you get to make eye contact with members of the audience and kind of share that experience, so it&39;s really cool."

- &39;Three-dimensional&39; concert -
Bernard starts each InsideOut concert with an appeal to the audience "not simply to listen but to see and to feel," making the concert more "three-dimensional."

Playing on the senses, the next InsideOut on February 3 will explore the experience of a sunrise with a program that includes Ravel&39;s romantic "Daphnis et Chloe."

Bernard, who said he gauged a positive reaction at a first InsideOut, has devoted the orchestra&39;s full season to the format.

But he isn&39;t proselytizing. While he hopes InsideOut catches on, he also sees it as a gateway to encourage more people to enjoy traditional classical concerts.

The critical element, he said, is to instil a sense of excitement.

"Today there is the notion that the audience must be rigorously educated in the work, the composer and the musical language in order to enjoy it," Bernard said.