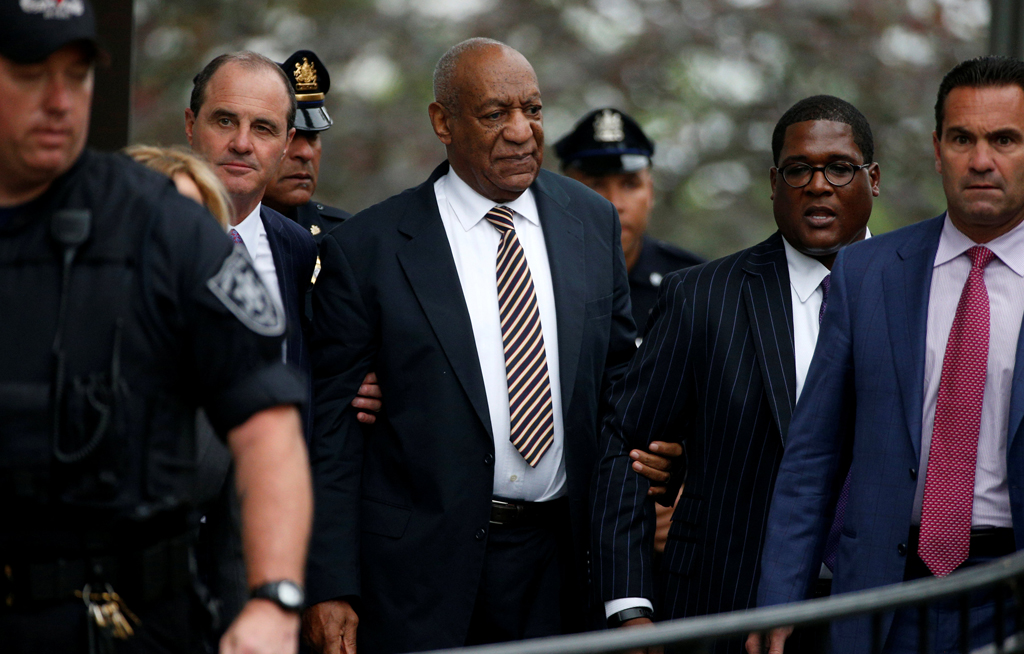 Actor and comedian Bill Cosby (C) leaves with lawyers Fortunato N. Perri, Jr. (R) and Brian McMonagle after the first day of his sexual assault trial at the Montgomery County Courthouse in Norristown, Pennsylvania, US June 5, 2017.

NORRISTOWN, United States - Bill Cosby's trial for sexual assault opened Monday in Pennsylvania with tearful testimony from one of his alleged accusers as prosecutors painted the megastar turned pariah as a sexual predator who established trust with younger women before incapacitating them with drugs and wine.

In one of America's biggest celebrity trials in years, the pioneering black comedian faces three counts of aggravated indecent assault, which each carry a maximum sentence of 10 years in jail and a $25,000 fine.

The 79-year-old, for years feted by millions as "America's Dad" on "The Cosby Show" is on trial for allegedly drugging and sexually assaulting a university employee at his Philadelphia home 13 years ago.

Dressed in a navy suit, he sat next to his defence team at the Montgomery County Courthouse in the Philadelphia suburb of Norristown, starring in the direction of the jury or casting his eyes down.

Around 60 women have publicly accused the Emmy-winning television star and comedian of being a serial sexual predator for decades, ending his career and leaving him isolated by friends and celebrities.

Several of those accusers were in court on Monday, but his fate rests on the allegations of just one, Andrea Constand, related to just one encounter in January 2014. It is the only criminal case against him as most of the alleged abuse happened too long ago to prosecute.

Constand, a 44-year-old Canadian, was at the time director of basketball operations at Temple University, where Cosby served on the Board of Trustees at the time of the alleged assault in January 2004.

"This man used his power and his fame and his previously practised method of placing a young, trusting woman in an incapacitated state so he could sexually pleasure himself," said assistant district attorney Kristen Feden.

Cosby says he gave Constand Benadryl to relieve stress, insists their sexual relations were consensual and accuses her of lying.

"Trust, betrayal and inability to consent," Feden said. "Because she was in that incapacitated state, she couldn't consent."

Feden said the trial would "shatter" illusions that Cosby was the real-life embodiment of his signature character, lovable obstetrician and father Cliff Huxtable, a role that smashed through racial barriers.

Keshia Knight Pulliam, who played his daughter Rudy on the 1984-1992 sitcom, attended the opening statements, but there was no sign of Cosby's wife, Camille.

A former assistant to Cosby's Hollywood agent was the first witness, testifying that the actor drugged and sexually assaulted her in a similar manner at the Bel Air Hotel in 1996.

When she "came to," Kelly Johnson said she was lying on the bed.

"I remember hearing sounds, grunting sounds," she said. "My breasts were out, and I felt naked, but the dress wasn't off of me."

"He put lotion in my hand and made me touch his penis," Johnson added, breaking down into sobs.

Cosby, who says he is now legally blind, sat with his back to Johnson as his lawyer subjected her to a terse, furious cross-examination.

The defence team lectured the jury on the high burden of proof and warned them not to get distracted by his fame or by "finger-pointing."

McMonagle urged the jury to see Cosby as "just a citizen," saying his infidelity as a husband had made him "vulnerable to accusations" and tore into Johnson, forcing her to admit there were parts of her original testimony that she could not remember 20 years later.

Constand, who is gay but who has testified in the past to having had relations with men, is expected to testify.

She initially settled the case with a civil suit in 2006, but the case was re-opened in 2015 when new evidence apparently came to light.

Ultimately, it comes down to her word against his.

The prosecution will lean on Cosby's words in a 2005 court deposition, in which he admitted obtaining sedatives with a view to having sex.

The defence savaged Constand's credibility, alleging that she was untruthful and painted their relationship as consensual, one that involved many meetings, and allegedly saw her call the star 53 times after the incident.

The seven-man, five-woman jury will be sequestered for the duration of the trial, which is expected to last about two weeks.