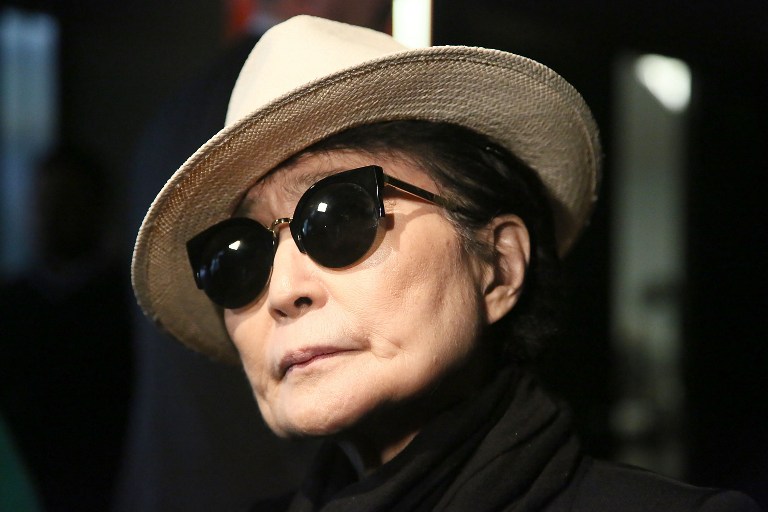 Yoko Ono's new exhibition "War is Over (if you want it)" is linked to a central theme of world peace.

NEW YORK - Yoko Ono is most famous as the widow of John Lennon. But on Sunday, New York&39;s Museum of Modern Art explores the avant-garde artist with a major retrospective.

"Yoko Ono: One Woman Show" is MoMA&39;s first exhibition dedicated entirely to the Japanese-born artist and musician, exploring her creative output from 1960-1971 when she was influential in the underground New York scene.

Wearing her trademark dark glasses and straw boater, paired with a black leather zip-up jacket, the 82-year-old New Yorker took time out of her schedule Tuesday to brief reporters on the exhibition.

"It is really good to know that everything you do is going to be recognised by people, and one day it is going to blossom. And that&39;s the reason why I am here now and why we are doing this show," she said.

The idea for the exhibition dates back to 1971, when Ono announced a one-woman exhibition at MoMA irreverently titled Museum Of Modern (F)art.

But when visitors arrived, they found only a man wearing a sandwich board saying that Ono had released a multitude of flies and that the public was invited to follow them within the museum and across the city.

It was this incident that led to the idea of the exhibition, museum director Glenn Lowry told reporters at the preview.

Ono said that in 1971 she had considered the idea of a "conceptual exhibition" as "something very serious."

Set out chronologically and thematically, the exhibition brings together 125 of her early objects, works on paper, installations, performances, audio recordings and films, alongside archival materials.

Her earliest works were often based on instructions, communicated in verbal or written form, and which MoMA called "at times poetic, humorous, unsettling and idealistic."

"She is one of those people who truly redefined the art of her time, but to whom we have never really given credit," one of the exhibition&39;s two curators, Christophe Cherix, told AFP.

- In bed with John Lennon -

"She is partly responsible because she became so popular at the end of the 60s," he added.

Cherix said the exhibition explores the little known period when Ono made "major contributions" to the art scene, particularly as a 25- to 30-year-old.

There are clips from her performance "Bag Piece," in which people are invited to undress, sit down in a white room and cover themselves in black.

Her 1964 film, "Cut Piece," shows Ono sitting on a stage, as spectators enter one by one to cut up her clothes and leave with a piece of fabric.

The tone of the exhibition is set from the beginning, with a green apple on a pedestal of Plexiglas, captioned "apple," and dating back to 1966.

"The idea is to confront the visitor as directly and immediately as possible and expose them to the radical nature of her work, made 40 years ago," Cherix told reporters.

The majority of the exhibits are devoted to Ono, but her famous collaborations with Lennon are also featured, notably their 1969 "Bed-In" film in which they sat in white pajamas talking in bed for hours.

Filmed during their honeymoon in Amsterdam, they talked politics and world peace to artists, journalists and activism.

Next to it is a sign saying "war is over."

On Tuesday, Ono advised reporters about creative energy and read from one of her missives on the importance of cultivating inner peace.

Then the woman, who became a recluse for a time after Lennon was murdered in 1980, counselled everyone to smile, calling it "good for the health."

The exhibition runs from May 17 until September 7.