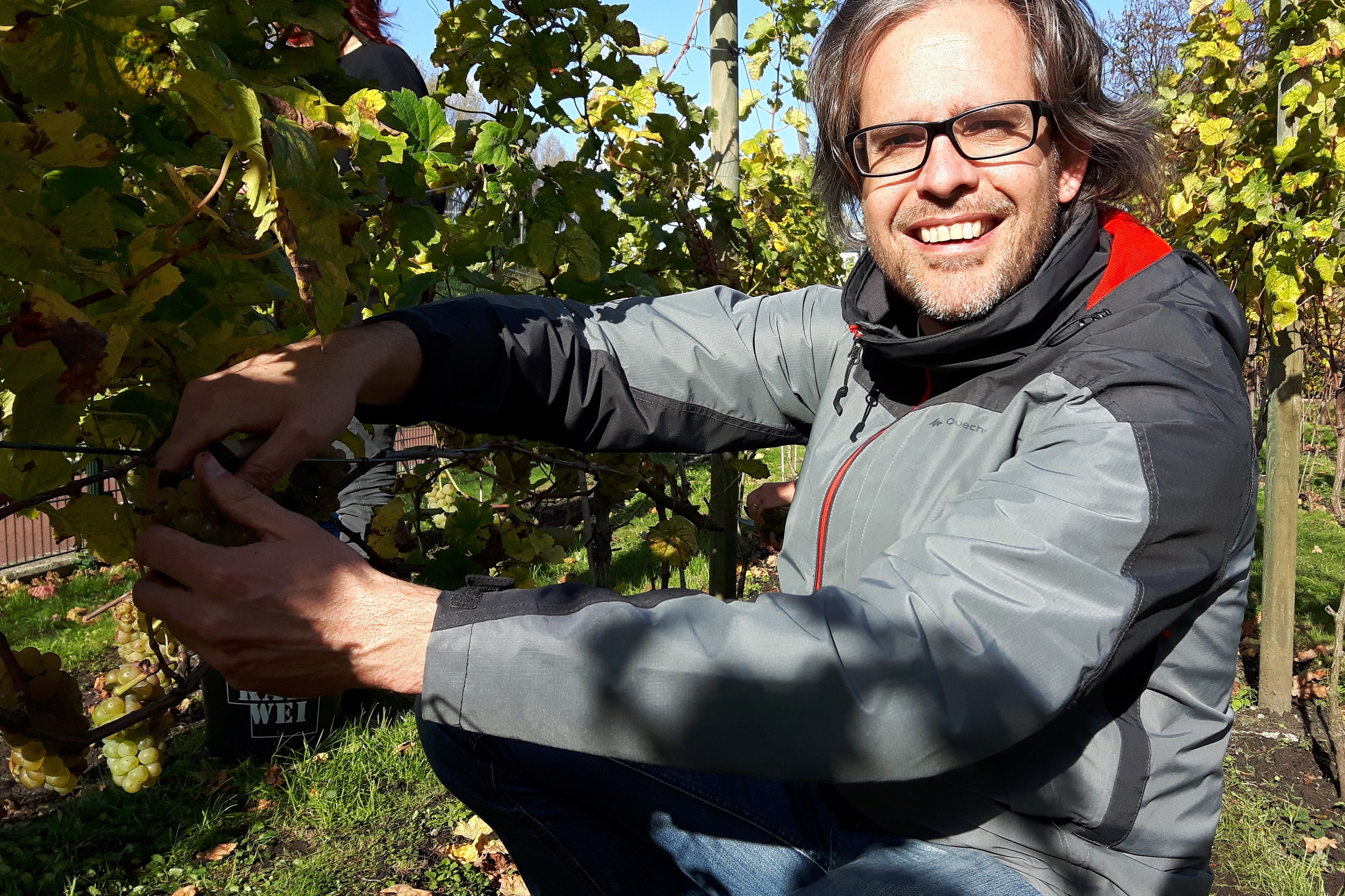 Tycho Vermeulen, founder of "De Haagse Stadswijngaard" (or The Hague Urban Vineyard), poses in a vineyard as he harvests grapes of Johanniter.

THE HAGUE - As a high-speed train rattled past their heads, amateur Dutch winemakers were busy gathering the last of the season&39;s grapes under a warm autumn sun in the heart of The Hague.

Wine is not usually associated with The Netherlands, more known globally for its tulips and cheese.

But in the shadow of some council homes and lying below the railway, a community project has taken off thanks to the passion of one winemaker, Tycho Vermeulen.

Standing among rows of vines hung with slightly bitter, citrusy Johanniter, he proudly recounted the growing success of his "De Haagse Stadswijngaard" (or The Hague Urban Vineyard), started four years ago on a piece of derelict land in a community garden.

The project brings together amateur growers and local residents for workshops, debates and evenings sipping and tasting the fruits of their labour, from glasses of wine to lovingly prepared stuffed vine leaves.

Today there are 650 plants on the 0.1 hectare (quarter acre) of land tended throughout the year by about 40 enthusiasts. Each rent about 10 vines, and receive their share of the wine and leaves.

"I&39;ve developed this concept (where) people can use their own bit of land and we&39;ve become a corporation so more people can enjoy and (build) fellowship around this vineyard," Vermeulen explained.

"I give them a course in vine growing and together throughout the year we manage this vineyard and they are responsible for their own 10 plants."

While the city has plenty of green spaces, it is more known for the vast, wind-swept beaches at its western edge and the imposing international courts and institutions which draw thousands of expat workers and their families every year.

"It&39;s intriguing that there&39;s a winery in the centre of The Hague... I didn&39;t believe it at first," said Marie-Jose visiting for the first time.

"I like also to be outside and do something with my hands and work in gardens. So this is like a garden."

This year&39;s harvest is looking promising, and should allow the cooperative to produce slightly more wine than in 2016, with around 600 litres to delight the tastebuds.

It will include a slightly fruity white from the Johanniter grape, a robust red with tannins from the dark-skinned Rondo variety, and a full-bodied rose from the Souvignier gris.

"Both quantity and quality are good, so I am a very happy winemaker at the moment," said the smiling 42-year-old Vermeulen, formerly a researcher at Wageningen University, which specialises in healthy food and living environment.

The vineyard&39;s success is credited to being in the heart of the city where temperatures are always a little higher than the countryside, as well as the choice of weather-resistant grape varieties.

Apart from the wine, the amateur vintners show a passion for the plant. And it&39;s a subject of much conversation for these neighbours, most of whom have Turkish roots. Thus was born a workshop on preparing sarmas, vine leaves stuffed with mincemeat or rice.

The community has historic ties to grape growing, "with the leaves for the sarmas. Those types of things that can connect us," added Vermeulen, with his curly salt-and-pepper locks and thick glasses.

"So we are looking for ways to use that to reach out to this community in a more tangible way."

Standing in his yellow rubber boots, a pair of secateurs in his hand, Pieter Bakens said the vineyard was a great way to meet other wine enthusiasts and a "beautiful multicultural project".

"There are a lot of people from Turkey, from Morocco, from other countries, from abroad, and we are trying to make some connection between all those people."

Even though grape growing is relatively new to The Netherlands, it has already begun to make its mark. According to the national statistics bureau, some 90 growers have planted about 160 hectares (just over 395 acres) with vines.

But for Vermeulen, his urban project is not about making profits. "What we bring to this city, is an interesting story. We bring it attention, we give it beauty," he said.

"And we hope to deepen the concept."