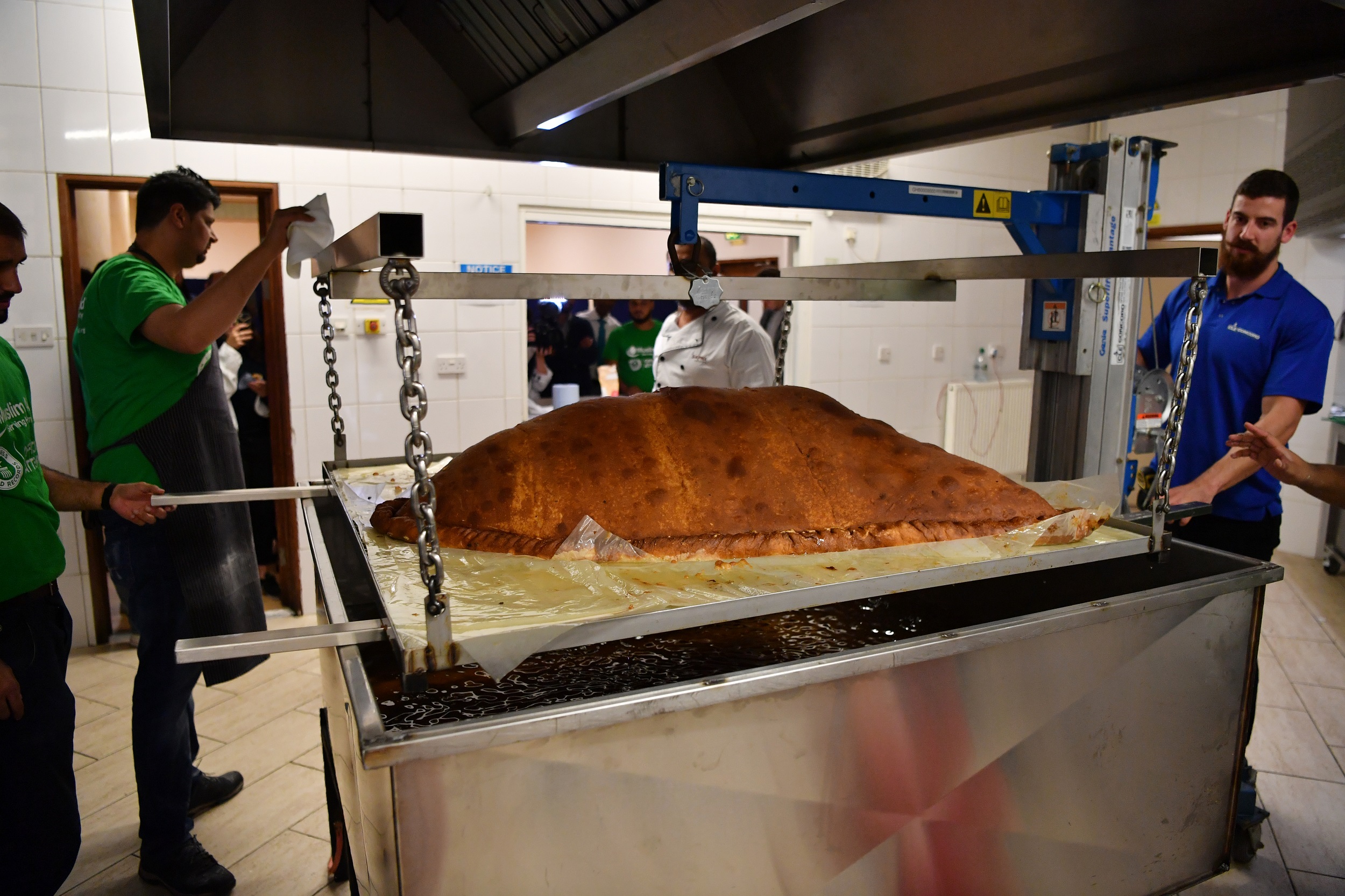 Muslim Aid staff and volunteers work as they attempt to construct and cook the world's largest samosa at the East London Mosque in London on August 22, 2017.

LONDON - The world record for the largest samoosa was smashed in London on Tuesday by a whopping version of the popular Asian snack weighing in at 153.1 kg.

A dozen volunteers from the Muslim Aid UK charity built the giant samoosa then deep-fried it in a custom-built vat at an East London Mosque.

Adjudicators from Guinness World Records were on hand to oversee the process and certify that the mega-samoosa passed the required tests.

The previous record of 110.8 kg was set by Bradford College in northern England in June 2012.

The samoosa was built on a giant wire mesh, then winched into a vat of cooking oil before being hauled out to be weighed.

"It was very tense. It looked like it was going to slide off. A crack appeared and I feared the worst," he told AFP.

WATCH: Enjoy a slice of the biggest samosa in the world! pic.twitter.com/bgoCpZGPBU

"It's got to be triangular; contain flour, potatoes, onions and peas; be fried, and retain the shape when cooked," he told AFP.

"It's got to look and feel like a samoosa; it's got to be edible by humans.

"The critical record is the net weight. Plus it all has to be eaten. No wastage!"

After the team carefully made the triangle-shaped super-snack, it was hauled up to the industrial winch by the biggest men available and slowly plunged into the vat.

Once it was winched out, and after the nervy weigh-in, the independent food safety officer, who had overseen proceedings, gave it the taste test. A simple thumbs-up triggered cheers around the hall.

It was then down to Patel to tie up all the certification and deliver the verdict: 153.1 kg.

"It's an absolutely great achievement," he declared.

Organiser Islam said it was a tough challenge.

"Initially I thought it would be a piece of cake: stuff it together, tie up the end and fry it," he said.

"When I realised there was not a single pot in the country that could hold that weight, we had to get something tailor made."

The samoosa took around 15 hours of work and was dished up into hundreds of portions distributed to the local homeless via the Salvation Army.