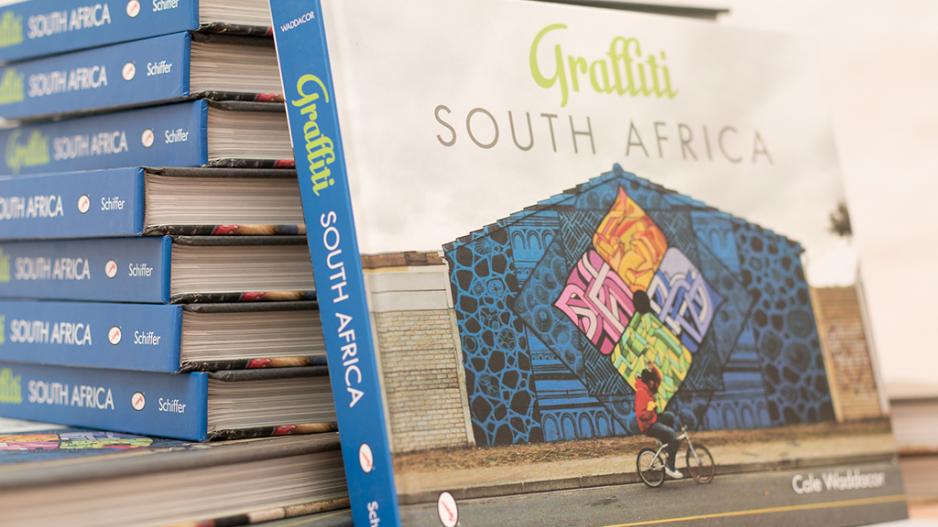 BRAAMFONTEIN - On Thursday night Johannesburg was introduced to the evolution of South African graffiti with the launch of local photographer Cale Waddacor’s new street art book, Graffiti South Africa.
The first book of its kind, Graffiti South Africa showcases a myriad of the country’s most influential graffiti artists and the development of street art culture. The beautifully bound hard cover provides a complete documentary record of the history of South African graffiti.
Combining the book with the artists it represents, the launch was accompanied by a live graffiti mural by FiyaOne and Reks as well as an intimate exhibition of works by well known street artists such as  Page, DekorOne, Veronika, Kevin Love, Devo and Tapz to name a few.
Waddacor spent years travelling, documenting and interviewing local street artists for his book. Graffiti South Africa now boasts a vast visual spread of street art ranging from walls to trains and action shots. Providing context and perhaps a somewhat more personal touch to the works, Waddacor included interviews with some top South African graffiti artists including Rasty, Mak1one, Faith47 and Mars.
Although some in attendance claimed that the book seemed superficial and ‘lacked a more in-depth analysis of the works’ the majority of the launch’s visitors were blown away by Waddacor’s ‘expansive coverage of the culture’.
The three-day debut will run until this Saturday and if you would like to get up close and personal with some of Johannesburg’s inner city street art, then be sure to book your spot on the Street Art Tour coordinated by Past Experiences. The route has some of the best graffiti art in the city, including internationals like Pose MSK and Shepard Fairey as well as works produced during the recent City of Gold Urban Art Festival.
Keep an eye out for eNCA’s full video interview with Waddacor and more from the launch next week.