Gazans 'tricked' into selling Banksy for a song 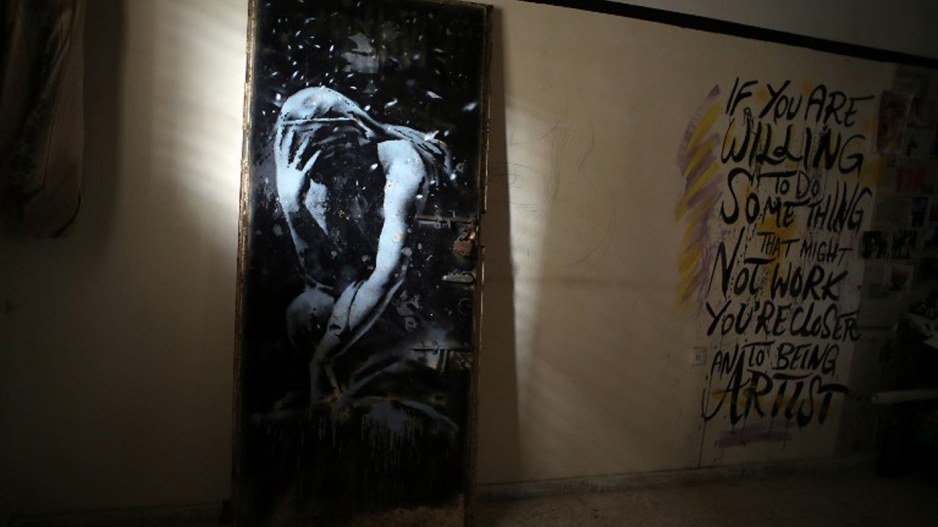 The painting of a weeping woman, said to be by British street artist Banksy, on the door of a house in Khan Yunis that was destroyed last year.

GAZA CITY, Palestine – A work by world-renowned graffiti artist Banksy has been sold for less than $200 (R2,393) in war-ravaged Gaza, where a homeless family say they were "tricked" into parting with the valuable collector&39;s item.

At the end of February, the artist, who remains anonymous, released an online video showing three works he painted on walls of homes in the Gaza Strip destroyed in Israeli air strikes.

Barely a month later in the impoverished Palestinian enclave, one of them changed hands for 700 shekels ($180) – a trifle for the work of an artist who can raise more than $1-million at arts auctions.

The graffiti shows Greek goddess Niobe weeping on the metal doorway which was all that remained standing of the Hamduna family home.

Rabieh Hamduna, 33, told AFP how he was approached by a young man who gave his name as "Bilal Khaled" claiming to be a news agency photographer and journalist.

"He said it was his agency that had painted the graffiti on the door and other doors, and that they now wanted to recover them," Hamduna said.

Hamduna said: "He tricked me. I didn&39;t know the graffiti was valuable. My house was destroyed and now I have to pay rent. I need the money and so I agreed to sell the door."

Hamduna said he wants the art back – not to sell it, but to put it on display.

"I want to exhibit it so that the whole world sees our suffering, like the artist wanted when he painted it."

Palestinian activists on social media have launched a campaign against Bilal Khaled, identifying him as a freelance journalist who has worked for a Turkish news agency.

They accuse him of having stolen "public property" which rightly belonged to the people of Gaza who were caught up in a devastating war with Israel last July and August.

Khaled responded on his Facebook page that the Hamduna family had helped him dislodge and carry away the door.

He wanted to save the door in case the home was rebuilt and would exhibit it at international events to raise awareness of the plight of Gaza, Khaled said, adding that he had contacted Banksy.

The artist&39;s online video was entitled "Make this the year YOU discover a new destination".

It purports to show him travelling to Gaza by commercial flight and then through smuggling tunnels – possibly beneath the Egyptian border.

Banksy&39;s works were seen as a damning critique of Israel&39;s bombardment of Gaza as it fought against the Strip&39;s Islamist rulers, destroying or damaging more than 100,000 homes and killing nearly 2,200 Palestinians, most of them civilians.

The murals also include a giant cat painted on the last remaining wall of a Gaza home playing with a ball of twisted metal.

The two-minute film shows children playing next to the cat mural and entire neighbourhoods razed during the war.

It fades out on a wall inscription apparently written by Banksy. "If we wash our hands of the conflict between the powerful and the powerless we side with the powerful – we don&39;t remain neutral," it reads in English.

The artist posted pictures of the works on his website.

Banksy is believed to have started out as a graffiti artist in London, although his identity remains shrouded in secrecy.

His murals have been chiselled out of walls and sold for large sums in the past.