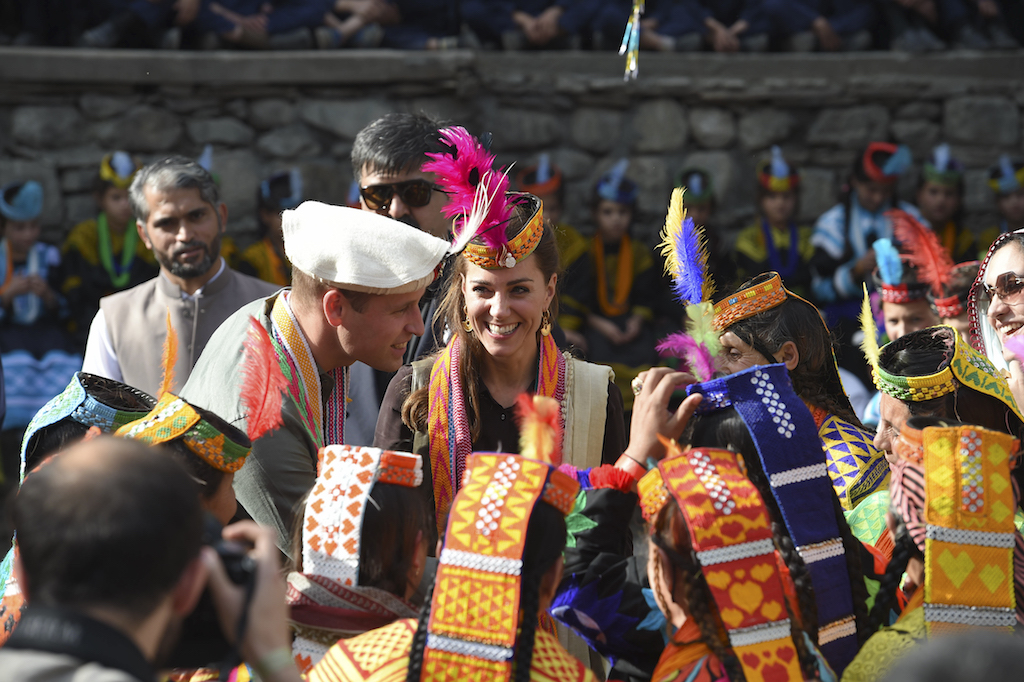 Britain's Prince William and his wife Catherine talk with members of the Kalash tribe during their visit to the Bumburate Valley in Pakistan.

BUMBURATE - Wearing traditional headgear and clapping to music, Britain's Prince William and his wife Kate met a tiny animist tribe in northern Pakistan on Wednesday after flying by helicopter to a remote Hindu Kush glacier near the Afghan border.

The Duke and Duchess of Cambridge spent the afternoon witnessing the effects of climate change on the Kalash, Pakistan's smallest religious minority -- an ancient, polytheistic tribe who live in three valleys.

Believed to be descended from Alexander the Great, they worship their gods with music and dance.

Before visiting the Kalash, the royal couple travelled by helicopter to a melting glacier in Broghil Valley National Park, near the border with Afghanistan.

They walked around the northern tip of the glacier and saw how far it has retreated in recent years, a statement from Kensington Palace said.

Pakistan's north is one of the most glaciated regions in the world, and experts say its vast, hoary rivers of ice serve as a water store for 250 million people.

But rising temperatures have alarmed residents who watch helplessly as the glaciers melt so quickly that they have unleashed devastating floods.

The couple met with environmental experts to discuss the melting, and later spoke with residents who have suffered in the floods.

Emergency response teams demonstrated first aid and a river crossing, then posed for selfies with William and Kate.

The Duke of Cambridge called the glacial melt an "impending catastrophe" in a speech delivered at a glittering reception in Islamabad late on Tuesday.