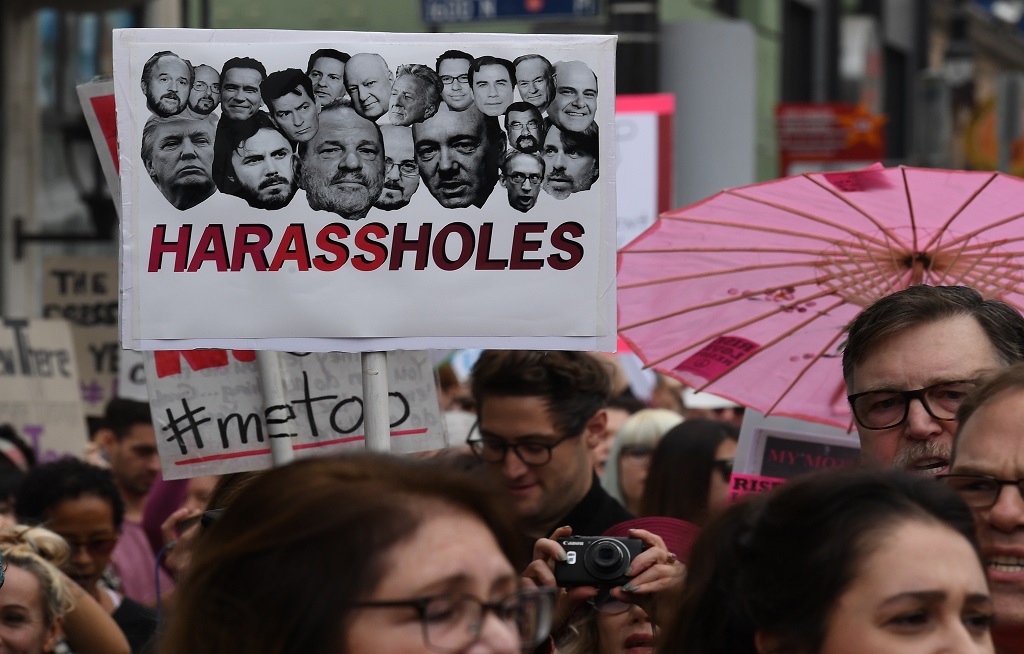 Victims of sexual harassment, sexual assault, sexual abuse and their supporters protest during a MeToo march in Hollywood, California on November 12, 2017.

PARIS - Hollywood director Terry Gilliam says the MeToo movement has morphed into "mob rule", claiming that while some women suffered, others used producer Harvey Weinstein to further their careers.

The Monty Python member said Weinstein "is a monster" and that there are "plenty of monsters out there... There are other people  (still) behaving like Harvey" in the film industry, abusing their power for sex.

Weinstein was exposed because he "is an a**hole and he made so many enemies," he told AFP.

But Gilliam said the reaction against the wave of sexual abuse and harassment revelations had become ugly and "simplistic... people are frightened to say things, to think things".

"It is a world of victims. I think some people did very well out of meeting with Harvey and others didn&39;t. The ones who did knew what they were doing. These are adults, we are talking about adults with a lot of ambition.

"Harvey opened the door for a few people, a night with Harvey -- that&39;s the price you pay," said the maker of Brazil and Fear and Loathing in Las Vegas.

"Some people paid the price, other people suffered from it."

Gilliam, who is in Paris to direct an opera, "Benvenuto Cellini", said the atmosphere around MeToo has become "silly, people are being described in ridiculous terms as if there is no real humanity left anymore.

"I feel sorry for someone like Matt Damon who is a decent human being. He came out and said all men are not rapists, and he got beaten to death. Come on, this is crazy!"

"I know enough girls who were in Harvey&39;s suites who were not victims and walked out.

"It&39;s crazy how simplified things are becoming. There is no intelligence anymore and people seem to be frightened to say what they really think. Now I am told even by my wife to keep my head a bit low," said the 77-year-old American-born animator.

"It&39;s like when mob rule takes over, the mob is out there they are carrying their torches and they are going to burn down Frankenstein&39;s castle."

But Gilliam said the truth was that abuse of power has "always happened. I don&39;t think Hollywood will change, power always takes advantage, it always does and always has".

"It&39;s how you deal with power -- people have got to take responsibility for their own selves."

Human beings, he said, "are physical creatures. There is touching and there is grabbing, that is the problem. I find it funny that (while this is going on) a self-confessed pussy-grabber is the president of the US and is just walking around.

"I find it incredible," he said, calling Trump a "conman".

Gilliam, who is now a British citizen, also took a swipe at Python colleague John Cleese, saying that "he is an idiot" to support Brexit.

"Look at America under Trump, look at England under the Conservatives -- it is just a joke and it is costing fortunes. Britain is part of Europe and to think it can be Great Britain again is utterly foolish.

"It makes me feel like I&39;ve gotten very old and I am living through a nightmare world at the moment," he added.

Gilliam said the biggest failure of the 1960s generation was not delivering true equality for women.

"The only thing that we did not do well is get women paid the same money as men are paid for the same job, that&39;s the one big failure of our time."