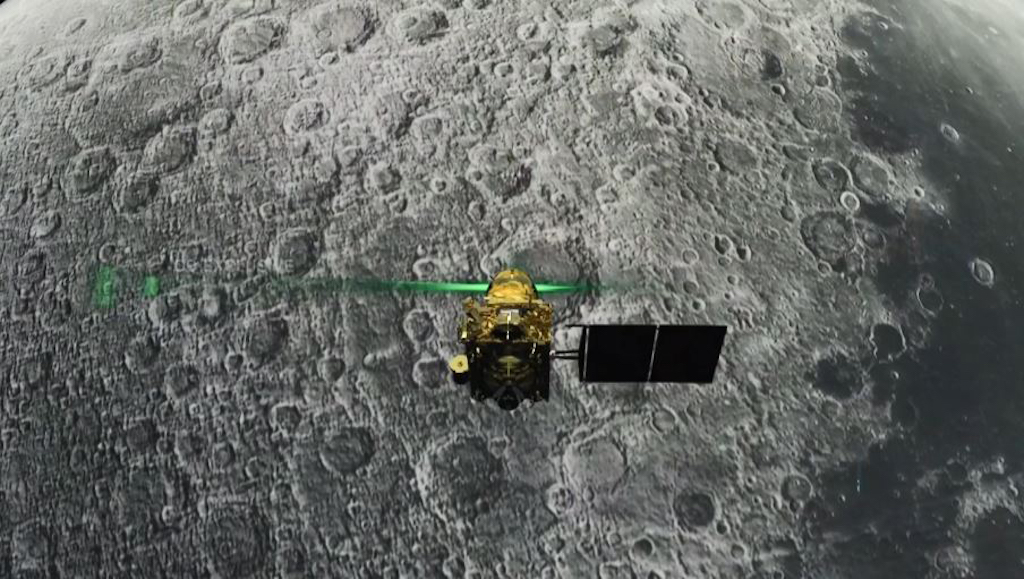 This screen grab taken from a live webcast by Indian Space Research Organisation (ISRO) on August 6, 2019 shows Vikram Lander before it is supposed to land on the Moon.

INDIA - India's space programme suffered a huge setback on Saturday after losing contact with an unmanned spacecraft moments before it was due to make a historic soft landing on the Moon.

Blasting off in July, the emerging Asian giant had hoped to become just the fourth country after the United States, Russia and regional rival China to make a successful Moon landing, and the first on the lunar South Pole.

But in the early hours of Saturday local time, as Modi looked on and millions watched nationwide with bated breath, Vikram -- named after the father of India's space programme - went silent just 2.1 kilometres above the lunar surface.

"Subsequently the communication from the lander to the ground station was lost," he said after initial applause turned to bewilderment at the operations room. "The data is being analysed."

The Chandrayaan-2 ("Moon Vehicle 2") orbiter, which will circle and study the Moon remotely for a year, is however "healthy, intact, functioning normally and safely in the lunar orbit", the ISRO said.

Freshly re-elected Modi had hoped to bask in the glory of a successful mission, but on Saturday he deftly turned consoler-in-chief in a speech at mission control broadcast live on television and to his 50 million Twitter followers.

"Sisters and brothers of India, resilience and tenacity are central to India's ethos. In our glorious history of thousands of years, we have faced moments that may have slowed us, but they have never crushed our spirit," he said.

"We have bounced back again," he added. "When it comes to our space programme, the best is yet to come."

Other Indians also took to Twitter to offer words of encouragement. "The important thing is we took off and had the Hope and Belief we can," said Bollywood star Shah Rukh Khan.

Indian media offered succour by quoting a NASA factsheet that said out of 109 lunar missions in the past six decades, 48 have failed.

Chandrayaan-2 took off on July 22 carrying an orbiter, lander and rover almost entirely designed and made in India - the mission cost a relatively modest $140 million -- a week after an initial launch was halted just before blast-off.

ISRO had acknowledged before the soft landing that it was a complex manoeuvre, which Sivan called "15 minutes of terror".

It was carrying rover Pragyan - "wisdom" in Sanskrit - which was due to emerge several hours after touchdown to scour the Moon's surface, including for water.

According to Mathieu Weiss, a representative in India for France's space agency CNES, this is vital to determining whether humans could spend extended periods on the Moon.

That would mean the Moon being used one day as a pitstop on the way to Mars -- the next objective of governments and private spacefaring programmes such as Elon Musk's Space X.

In March Modi hailed India as a "space superpower" after it shot down a low-orbiting satellite, a move prompting criticism for the amount of "space junk" created.

Asia's third-largest economy also hopes to tap into the commercial possibilities of space.

China in January became the first to land a rover on the far side of the Moon. In April, Israel's attempt failed at the last minute when its craft apparently crashed onto the lunar surface.

India is also preparing Gaganyaan, its first manned space mission, and wants to land a probe on Mars.

In 2014, it became only the fourth nation to put a satellite into orbit around the Red Planet.