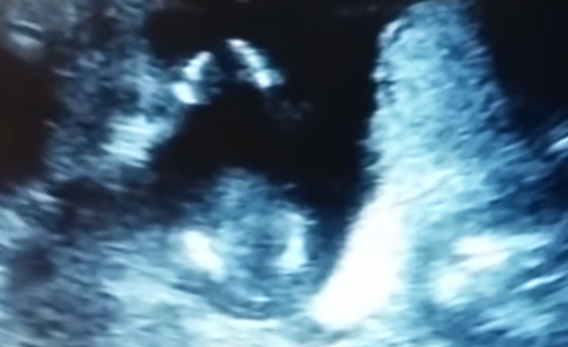 Jennifer and her husband were trying to decide the best way to announce their pregnancy, when they received a suggestion from within the womb. YouTube/Storyful

MUMBAI – They didn't pop open boxes of sweets or send out excited phone messages when their first child was born at public hospital on a rainy Mumbai night in July.

The couple had known from the 24th week of the pregnancy that their child would be born with Arnold Chiari Type II syndrome - a structural defect in the brain.

Since abortions in India are allowed only up to 20 weeks of pregnancy, the couple petitioned India's Supreme Court to allow them a to terminate the pregnancy, which was by then 27 weeks. The court rejected their plea.

The couple, who chose to remain anonymous in the much-publicised case, said in media interviews that they did not have the wherewithal - emotional and financial - to take care of the child, while doctors could not indicate the infant's expected life span. The baby died a fortnight ago.

"There was no treatment available for the baby. Pus was flowing from the brain. The mother was home and cared for the baby for a month and a half," said Nikhil Datar, a Mumbai-based gynaecologist, whom the couple consulted.

Datar guided the couple to file the abortion petition in the Supreme Court citing the foetus's abnormality. "She (the mother) has now slipped into depression. We don't disturb her any more," Datar told the Thomson Reuters Foundation.

When India introduced the Medical Termination of Pregnancy Act in 1971, it set a 20-week deadline for abortions, which campaigners say was an arbitrary decision then, and now ignores the medical advances India has made.

The Indian government remains reluctant to change the law fearing its misuse for sex-selective abortions. But the 20-week deadline has hit victims of sexual assault, especially the very young whose pregnancies are detected late, campaigners say.

In July, the Supreme Court rejected an abortion plea made by the parent of a 10-year-old rape victim who delivered a child in August. However, the court gave permission on Wednesday for a 13-year-old girl who was raped to terminate her 31-week pregnancy, in a move praised by campaigners.

"It is unethical to put a victim of rape through the trauma of a full term pregnancy and then abandon the child," said Sangeeta Rege of the Centre for Enquiry into Health and Allied Themes (CEHAT), a health charity supporting the 13-year-old.

RT CNNnews18 "India's law on termination of pregnancy has come to the forefront again | utkarsh_aanandhttps://t.co/qno3YJMjI8"

These cases were among a string of petitions, backed by the some of the country's best known doctors, health charities and lawyers, seeking abortions at India's top court.

The court has approved more pleas than it has declined, but activists say suggested amendments to the 1971 act to extend the abortion deadline to 24 weeks and to train more doctors to carry out abortions should be passed in parliament to unburden the court and save women from unnecessary stress.

"In 45 years, technological interventions have improved. Terminations are becoming safer and safer," said Datar, who is guiding at least six patients currently on their abortion pleas.

"Not a woman's choice"

Abortions in India are a "conditional right", offered only if there is a substantial risk of the child being born with a physical or mental handicap or in the case of contraceptive failure. But the termination must be carried out within 20 weeks - unless the mother's life is in danger - and the final decision rests with the doctor, who will often consult the woman's wider family.

"Abortion is not being understood as a woman's right. Women are asked to bring their spouse or in-laws if they are seeking an abortion particularly in the second trimester," said Rege.

"So abortion is not a woman's choice, but that of the family."

And doctors fear flouting another law - the Pre Conception and Pre-Natal Diagnostic Techniques Act - that aims to stop the widespread practice of female foeticide and sex-selective abortions in India, where boys are preferred over girls.

So abortion requests in the second trimester of a pregnancy – which is when foetal anomalies are detected - are often denied, despite studies showing that only a small proportion of these abortions are sex-selective. As a result many women visit small backstreet clinics to terminate their pregnancies, where the cost of the procedure is high but care is poor.

"It is estimated that about 10 percent of the nearly 45,000 maternal deaths in the country annually are due to unsafe abortions," said Subha Sri, chairperson of Commonhealth, a national coalition of health charities.

"Studies have shown that the more desperate the woman for an abortion, the higher its cost." Proposed changes to the MTP Act have raised concerns in the Indian government that the amendment may increase sex-selective abortions, a concern campaigners say is not based on evidence.

Sandeep Jadhav, 29, was over the moon when his wife Sonali told him she was pregnant with their first child.

Their local municipal hospital that had long waiting times and the first ultrasound scan came when Sonali was already 20 weeks pregnant.

"The doctor said there was a problem, but asked me to return after a month," Jadhav said. Jadhav, a driver, told his employer who took him to a gynaecologist in a private hospital where he was told his child will be born with a neurological condition.

"I wanted a healthy child. But my wife was already 21 weeks pregnant by the time the diagnosis was made." Backed by Datar, Jadhav made an abortion plea to the Supreme Court, which was approved. Sonali had a termination at 24 weeks.

Doctors say that while foetal abnormalities can be detected after 18 weeks, the wait can be longer in India where public healthcare facilities are overloaded. Renowned paediatric cardiologist Devi Shetty has argued that "screening 26 million pregnant women a year with less than 15,000 experienced radiologists within the deadline of 20 weeks is a tall order in India".

This paradox, campaigners say, makes the case for the deadline to be extended to at least 26 weeks and lifted completely for rape-induced pregnancies.

"The deadline revolves around the unborn child. But what about the person who is alive?" asked Rege.