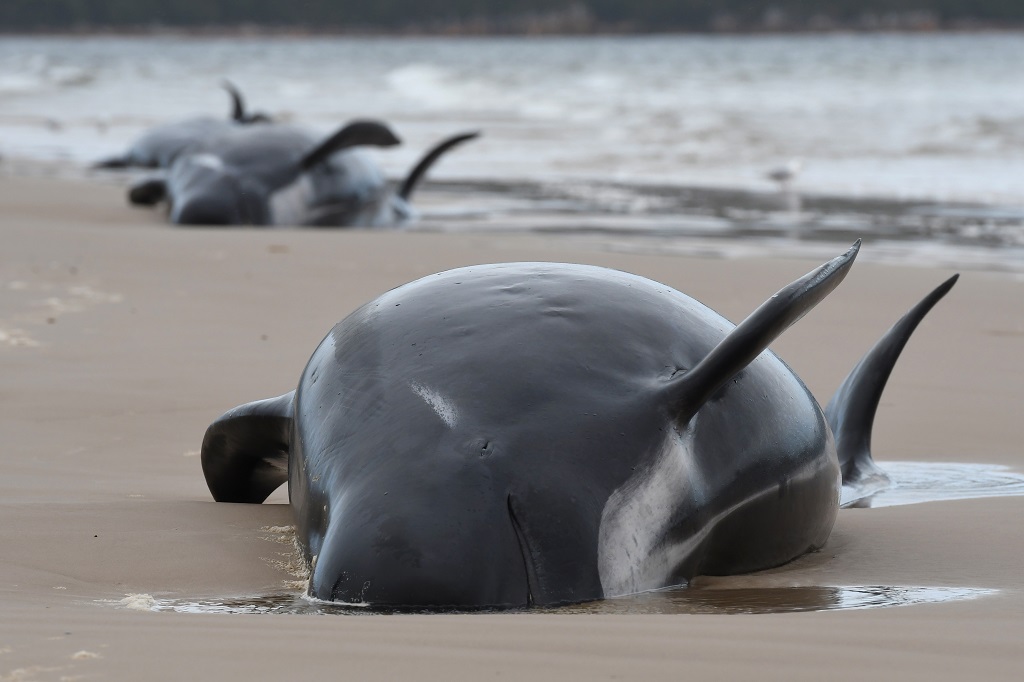 Rescuers faced a race against time to save nearly 200 whales stuck in the remote Australian harbour on September 22, hoping to prevent the toll of 90 dead from rising further after managing to free "a small number" of the stranded mammals.

SYDNEY - About 270 pilot whales were discovered stranded in an Australian harbour this week, sparking a major rescue mission.

Here is a Q&A on the phenomenon:

Why do the whales get stranded?

The reasons whales and dolphins strand are not fully understood but theories include sickness, navigational error, the presence of predators and extreme weather.

High-frequency sonar has also been blamed. The use of anti-submarine sonars was suspected of causing the mass beaching of whales in 2002 in the Canaries after a NATO exercise.

When a single whale or dolphin is found washed up on a beach, it is usually because of illness, according to Mike Double, the head of the Tasmania-based Australian Marine Mammal Centre.

In the Tasmania case, one or two pilot whales may have headed for shore after becoming sick, with the highly sociable pod following, or they could have been chasing their deep-water prey and strayed too close to the coast, Double said.

Sadly, yes. While the Tasmania stranding is one of the biggest recorded in the region, the southern reaches of Australia regularly see mass whale beachings.

In 2017, more than 600 of the creatures beached themselves in neighbouring New Zealand, with rescuers managing to save about 400.

Both areas are known "hotspots" for whale strandings, with recorded incidents dating back to the 1800s in New Zealand, according to Karen Stockin, an expert in marine mammals at the country's Massey University.

Mass whale strandings also regularly occur in other parts of the world.

In April 2015, about 150 melon-headed whales were discovered washed up on a stretch of beach in Japan. More than 300 whales were found on a remote Patagonian inlet in southern Chile later the same year.

One of the largest known mass beachings in the last century was of false killer whales in October 1946, when an estimated 835 of them were stranded near Argentina.

Can the whales be saved?

Usually, specialised equipment is brought in to return stranded whales from beaches to the ocean.

But in the Tasmanian case, the surviving whales are stuck on two sandbars in the harbour and can only be reached by boat -- meaning rescuers have to jump into the chilly shallows and help manoeuvre the creatures into deeper water.

Using slings attached to boats, the whales are being guided into the water then out of the harbour into open ocean -- a method that has so far saved at least 25 whales.

Stockin said "at least a portion are likely to turn tail and re-beach" after being refloated, presenting an ongoing challenge for rescuers.

Survival rates ultimately depend on how long the whales have spent out of the water, she said.