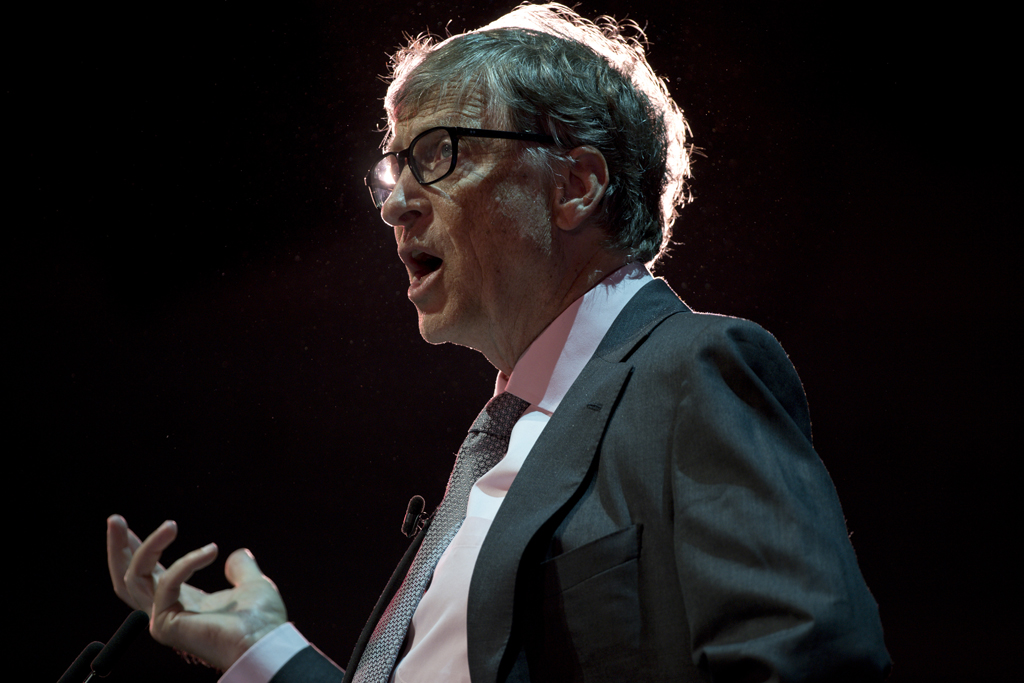 US philanthropist Bill Gates, of the Bill & Melinda Gates Foundation speaks at the Grand Challenges Annual Meeting 2016 in central London on October 26, 2016.

Philanthropist Bill Gates is the founder and co-chair of the Bill and Melinda Gates Foundation. It has committed more than US$3 billion in HIV grants to organisations around the world and more than US$1.6 billion to the Global Fund to fight AIDS, tuberculosis and malaria. Gates answers questions from several African academics about HIV/AIDS on the continent. (Disclosure: The Gates Foundation is a strategic partner of The Conversation Africa).

Professor Francois Venter, Deputy Director of the Reproductive Health Institute in South Africa - HIV prevention continues to be a mixture of biomedical interventions, such as pre-exposure prophylaxis (PrEP), male circumcision and treatment as prevention, as well as so-called behaviour change interventions. Some, such as condoms and reductions in partner numbers, get mired in a messy moral debate about sex. How do we get these behavioural interventions better tested, and the policymakers to listen to the evidence?

Bill Gates: The truth is we still don’t know enough about the underlying dynamics that put people at risk of HIV. Social barriers – such as discrimination, stigma and structural inequality – work against biomedical efforts to address the epidemic. We have to better understand these barriers in order to develop more effective solutions.

And there are efforts around the world to do just that. For example, the PEPFAR DREAMS initiative should help us learn more about why adolescent girls and young women often face heightened risk of HIV infection. DREAMS programmes aim to deliver evidence-based tools that address barriers like poverty, gender inequality, sexual violence and lack of education.

It’s also important to learn more about the market factors – including supply and demand for new tools – that affect how people seek and use prevention options. Organisations like AVAC and the Clinton Health Access Initiative are working to understand how to reach people with products and services they will be most empowered to use.

Large-scale change will ultimately only be successful if it is driven from within communities that face the greatest burden of the HIV epidemic. Civil society and local advocacy groups are key to developing and implementing solutions that match needs on the ground. We can help expand access to evidence-based tools, but it will take community ownership and leadership to ensure people can use them.

Professor Adam Habib, Vice-Chancellor of the University of the Witwatersrand, South Africa - Philanthropists like yourself have been enormously generous contributors to addressing societal challenges, including HIV/AIDS, in recent years. There is a criticism that philanthropy, while demonstrating generosity, suffers from the weakness of pouring resources into the projects of individual philanthropists. The net effect is that the resources are not deployed in a systematic manner that could have far more effect on the lives of the disadvantaged. How do you work with governments and other organisations to ensure your strategy is aligned with the needs of the people in the countries that you are working with?

Bill Gates: Solving the complex problems that affect the world’s poorest will only be possible with close collaboration between governments, NGOs, academic institutions, businesses and philanthropy. As only one part of this diverse community, we centre our approach on strong partnerships. We want to be sure that our work is informed at every stage by a broad group of experts, from high-level government officials and community leaders to local grantees and advocates.

One great example is our work with the Global Fund, which collects resources in a centralised pool that is then allocated based on local needs. Every project is planned, implemented and monitored with the guidance of a committee of local stakeholders, including local civil society and affected populations. We also work directly with a number of grantees in each country and depend on their invaluable on-the-ground insights and perspective.

While we’re proud of our contributions in the fight against HIV/AIDS, our resources represent only a small portion of worldwide funding to combat HIV. As a foundation, we can take on risks that governments and private institutions may be unable to take themselves. That’s why we concentrate our resources on areas where existing funds are insufficient or where our support can have potentially game-changing impact. This freedom lets our local and multilateral partners do their most ambitious work.

Dr Nelly Mugo, Principal Investigator at the Kenya Medical Research Institute - Your foundation has done tremendous work in working with communities with high burdens of disease to find novel solutions and innovative delivery tools. There are often fairly simple interventions which, if implemented, would make differences in maintaining healthy populations, but are unattractive to funding institutions. The gap in access often lies in service delivery. What top five strategies would you advise countries such as mine to implement to improve service delivery and health outcomes?

Bill Gates: There aren’t necessarily five specific approaches that will work in every country. It’s up to national governments and local communities to figure out what will work best for their specific needs. But there are some important general lessons that policymakers and health leaders can apply.

One lesson we’ve learned is that delivery of treatment and prevention is really important, and needs to be personalised. Not all patients require the same type of care. Tailoring delivery of services for people with different needs can improve outcomes, while saving health providers’ time and resources. This approach is called differentiated care.

Using data to reach at-risk populations faster and more effectively is also crucial. We’re excited to see this at work in Kenya, where the government is partnering with Jhpiego to develop new and creative ways to expand access to PrEP among adolescent girls, young women and other populations at risk.

Kenya’s HIV Prevention Road Map is also a great model for these types of efforts. The road map is a comprehensive, efficient government-led model for rolling out evidence-based programmes that reflect the needs of local populations. It also includes provisions to hold individuals and government agencies accountable.

Professor David Serwadda, former Head of the School of Public Health at Makerere University in Uganda - Many have made the point that South to South collaboration, in which countries get to understand each other’s problems and how they have solved them (or not), will do much more good for innovation, development and shared responsibilities. Do you agree? If so what is your organisation doing to facilitate that?

Bill Gates: I believe that South-South collaboration will lead to some of the most transformative changes in how we address global health challenges. Successful locally-driven programmes can serve as important models for communities that face similar challenges. The global reach of our foundation means that we can help ensure that lessons learned and best practices from one geography or issue can be adapted and applied to another.

Take for example, the Avahan programme in India. The programme provides services to almost 300,000 female sex workers, men who have sex with men and injecting drug users. It was developed to be driven by the communities it serves. We’re now seeing lessons from Avahan applied to a similar programme in Kenya.

We also know that one of the barriers to South-South collaboration is access to information. We now require that all research we support is made free for other scientists to find and build on. This approach, called “open access”, aims to reduce the hurdles that successful South-South partnerships must overcome, like paywalls and restrictions on the use of data. And we’re optimistic that it could help accelerate the development of game-changing innovations.

Professor John Idoko, Professor at the University of Jos, Nigeria - What can other global health issues learn from the impact of political leadership on goals – national and global – in the HIV response?

Bill Gates: Throughout the HIV response, we’ve really seen the power of an engaged and informed global community. Advocacy efforts that began during the early years of the HIV epidemic and continue today have been vital in expanding access to treatment and driving relatively rapid innovations in both prevention and treatment.

And national governments and donors responded to the passion of advocates. PEPFAR and the Global Fund, for example, have helped coordinate efforts and ensure that resources are used efficiently. Investment in research and development led to the development of revolutionary tools such as simplified antiretroviral treatment, voluntary medical male circumcision and PrEP.

But passion and funding alone are not enough. When I was in Durban for the AIDS conference in July I was reminded of how forward thinking national policies can change millions of lives. In South Africa, more than three million people now have access to treatment and far fewer babies are born with HIV each year. South Africa is also a leader on prevention, with its recent approval of PrEP and ongoing investment in the search for new tools.

The HIV response, beginning with the leadership of early advocates, has always been nimble and driven by evidence. Other global health movements can learn from this, and so can the current HIV/AIDS community. We know that reaching ambitious global targets will require us to be faster, smarter and more innovative, especially as we’ve seen the rate of new infections plateau. We’ll need to continue to be agile and let evidence guide our decisions.