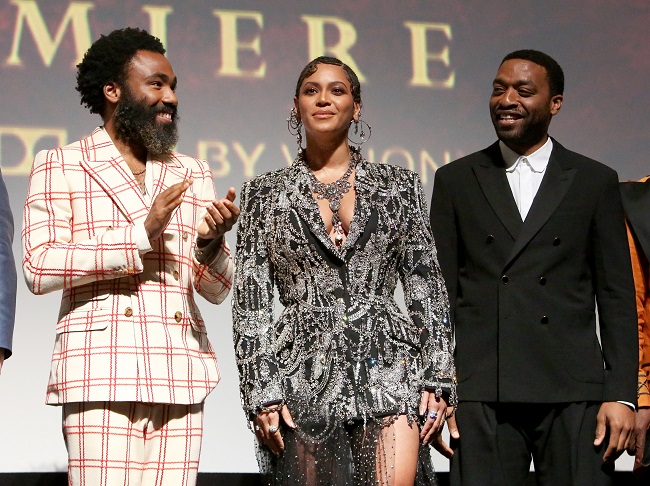 (L-R) Donald Glover, Beyonce Knowles-Carter, and Chiwetel Ejiofor attend the World Premiere of Disney's "THE LION KING" at the Dolby Theatre on July 09, 2019 in Hollywood, California.

Director Jon Favreau's remake of the animated classic collected a massive $185-million from 4,756 North American theatres during its first three days of release.

In yet another win for Disney, the movie landed the best domestic launch for a PG film and set a new record for the month of July.

That figure represents the second-best domestic debut of the year behind Disney and Marvel's Avengers: Endgame ($357-million). The Buena Vista company now holds five of the top six biggest movies of 2018 so far.

Overseas, The Lion King felt the love with $269-million for a global start of $433-million. The film launched in China last weekend and has since earned $98-million, boosting the worldwide haul to $531-million.

"We have a lot to celebrate," said Cathleen Taff, Disney's president of global distribution.

"The Lion King has such a resonance in pop culture that you see all different types of people coming out. People wanted to be part of this."

The Lion King is already one of the most recognizable stories across the world, but the remake benefitted from an equally buzzy voice cast including Glover as Simba, Beyonce as Nala, Chiwetel Ejiofor as Scar, and Billy Eichner and Seth Rogen as Timon and Pumbaa. James Earl Jones reprised his role as Mufasa from the original movie. The updated version also includes a new song from Beyonce.

Since other Hollywood studios refrained from releasing a movie against The Lion King, a number of holdovers filled out domestic box office charts. In a distant second place, Sony's Spider-Man: Far From Home collected $21-million during its third weekend in theatres, lifting domestic ticket sales to $319-million. The web-slinging superhero adventure has generated $569-million at the international box office.

Disney and Pixar's Toy Story 4 landed in third with $14-million. In five weeks, the animated movie has generated $375-million in North America and $859-million globally, making it the seventh Pixar film to surpass the $800-million mark.

At No. 4, Paramount's alligator thriller Crawl generated $6-million for a domestic tally of $23-million. Rounding out the top five is Universal's musical rom-com Yesterday, which pocketed $5.1-million during its fourth weekend of release. The movie has grossed $57.5-million to date.