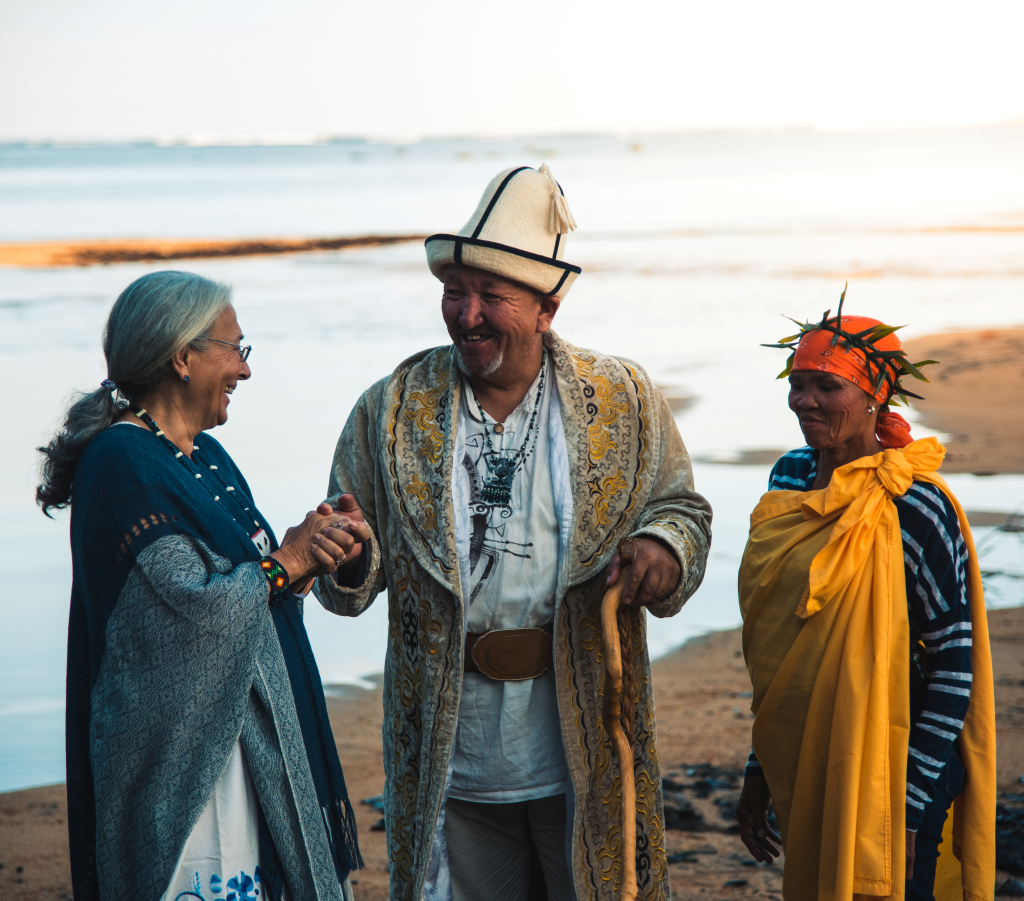 Dr. Apela Colorado of the World Indigenous Science Network meets with Zhaparkul Raimbekov, a snow leopard shaman from Kyrgyzstan, and Lys Kruper, an elder with the Khomani San Bushmen of South Africa, during a gathering of indigenous elders on the Hawaiian island of Kaua'i, U.S., November 2, 2017. Picture taken November 2, 2017

LONDON - Indigenous elders from Alaska to Australia have come together to deliver some tough love in a new film for Earth Day: the human race will only survive if we start putting our minds at the service of our hearts.

Produced by Academy and Emmy award-winner Jeffrey D. Brown, Wisdom Weavers of the World was shot in Hawaii where Ilarion "Kuuyux" Merculieff, an Alaskan Unangan leader, gathered a dozen other elders to hold councils and ceremonies in November 2017.

"Mother Earth is crying for her human children," Merculieff says in the documentary, shot against a backdrop of volcanic slopes and surf on the island of Kaua'i.

"She has lived for billions of years. She'll live for more. It's a question of whether or not we human beings are going to live."

With Wednesday marking the 50th anniversary of Earth Day, a milestone in the emergence of the environmental movement, indigenous peoples are increasingly at the forefront of global struggles against habit destruction and climate change.

The four-day gathering of elders concluded that such problems will only be solved through a fundamental shift in human consciousness, rather than a constant striving after purely political or technological fixes.

"The world is looking in the wrong directions for answers," Merculieff told Reuters television by video call from Anchorage, speaking from a room decorated with traditional drums.

"We have thousands more environmental organisations in existence today than we had 30 years ago and yet Mother Earth's life support systems are coming to the edge, and no one is asking why. The elders are saying that we must look inside, rather than outside, for the answers."

The 14-minute film can be seen for free from 1700 GMT (1 p.m. ET) on Wednesday through the Wisdom Weavers of the World website and social media channels, with translations in 12 languages. Merculieff and other elders will be hosting a virtual gathering open to the public at 1730 GMT.

"Here for a reason"

The team behind the film see it as a starting point for an open-ended series of events and collaborations to inspire people to ask themselves how they could make a deeper contribution to the lives of their communities and the planet.

"The film offers a gateway to ongoing connection with elders," said Violet Starkey, of the Wisdom Weavers core team.

In the meantime, Merculieff hopes that people will use the pause enforced by the coronavirus pandemic to reflect on how they could help change the "dream" of the modern world.

"It's not an easy job going from the mind to the heart and letting our heart be in charge of what we do. Because most people would think that was crazy. But indigenous people worldwide know that that's the way to go," he said.

"We're placed on this Earth now for a reason," Merculieff added. "If we have the courage to listen to our hearts, we know that this gift that we carry will be broadcast and help in some way throughout the world."

Kumu Sabra Kauka, a Hawaiian studies educator and tradition bearer, who appears in the documentary, told Reuters wildfires in California and Australia had been a wake-up call.

"One of the things that we all shared was a deep love and respect for Mother Earth. And this is a story that has to be shared today because not everyone remembers it," Kauka said.

Pausing for a moment to reflect, she summed up the message the film aims to convey: "Listen to your heart. Follow your path. May it be clear, and for the good of all."