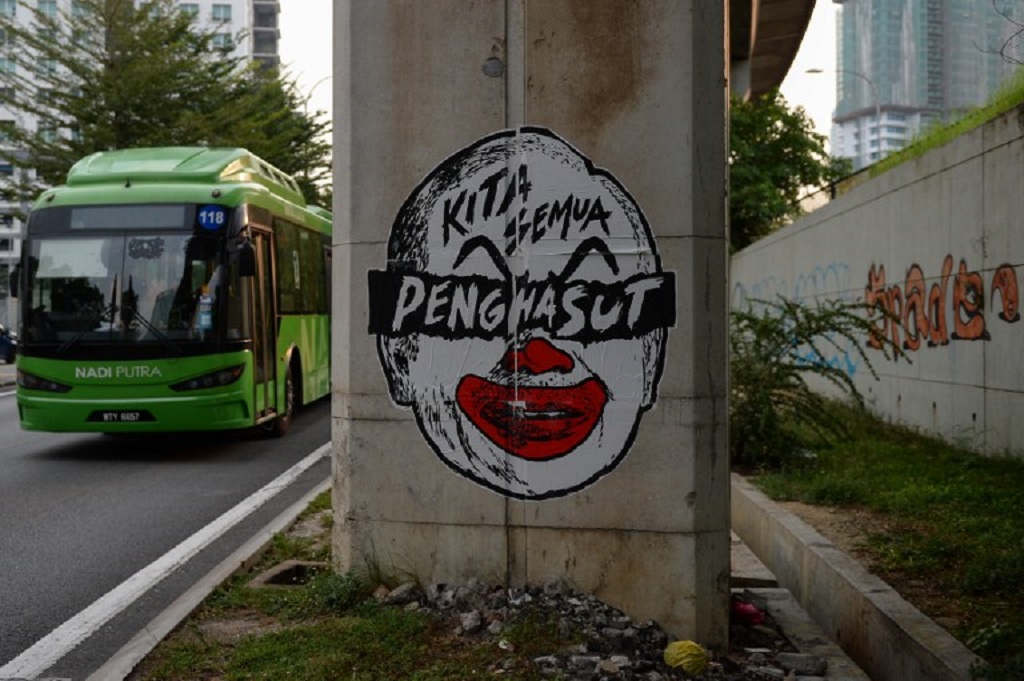 KUALA LUMPUR - A Malaysian designer&39;s caricatures of the scandal-plagued prime minister as a sinister clown have become a viral phenomenon, spurring a wider protest-through-images movement and making the artist a target of authorities.

Shared widely on social media, they have sparked copycat variations and struck a chord with Malaysians outraged by corruption allegations levelled at Najib and his moves to thwart investigations.

"Our country is being governed by fools and crooks," Fahmi, a punk-rock aficionado, said in an e-mail interview while on an extended trip overseas. He seeks to "point out the hypocrisies [of Malaysian politics], to draw attention to these absurdities, and get people to laugh at it."

The street artist threatened with arrest in Malaysia for his poster of PM Najib as a clown, 4Corners @johnnyturk pic.twitter.com/G8b7iD8w9o

But Malaysian authorities are not amused. Fahmi, 38, who has been arrested previously for his activism, was questioned by police and told to stop posting the images, which show Najib in powder-white clown make-up, with evilly arched eyebrows and a garish blood-red mouth.

He said police were investigating possible violations of multimedia laws that could bring five years in prison.

Last year, a Malaysian political cartoonist famed for skewering the government was hit with multiple sedition charges that lawyers say could see him jailed for up to 43 years.

Fahmi, who calls art his "weapon", remains undeterred. "They can jail a rebel, but they can&39;t jail the rebellion," he said.

Najib is battling accusations that billions of dollars were stolen from a state-owned company he oversees, and is under pressure for accepting a mysterious $681-million overseas payment.

He denies accusations that the huge payment was funnelled from the now-struggling fund, but has fuelled anger by curbing investigations, purging government critics over the scandal, and clamping down on media reporting of it.

Allegations of a cover-up crescendoed in January when Najib&39;s hand-picked attorney-general abruptly absolved him of any wrongdoing in taking the huge payment.

The images, and copycat iterations, have been widely shared online, while posters and stickers have begun appearing on public walls, which authorities quickly remove. The guerrilla campaign has highlighted social media&39;s emergence as a political battleground.

With mainstream media controlled by the long-ruling regime, the opposition has harnessed the Internet in a run of recent election successes, aided by a new generation of voters.
Authorities promised years ago not to censor the Internet, but have displayed increasing unease, recently forming a police unit to scour cyberspace for "seditious" content.

The government has also sought to use the Internet to its advantage, but drew scorn for a recent RespectMyPM campaign that was savagely pounced upon by Twitter users, with trolls changing it to SuspectMyPM.

Fahmi, a Muslim, cuts an unusual avant-garde figure in Islamic-majority Malaysia with his all-black ensemble of jacket, jeans, thick-rimmed glasses, shoulder-length hair and beret. Educated in the United States as an electrical engineer, his art is largely self-taught.

He counts the Atelier Populaire movement, which produced powerful posters during 1968 strikes and demonstrations that gripped France, as a major influence, and punk rock provides his soundtrack while working.

Fahmi stresses that his work typically skewers not just Najib but all sides in multi-ethnic Malaysia&39;s politics, where an entrenched ethnic Malay ruling elite is struggling to fend off a fractious pan-racial opposition promising to end money politics and democratic abuses.

Denouncing the "childish" bickering and race-baiting, Fahmi is puckishly pleased with the movement he has started. "When people are emboldened to defy and stand up against injustice, against corruption, it chips away at the power structure that keeps people docile," he said.