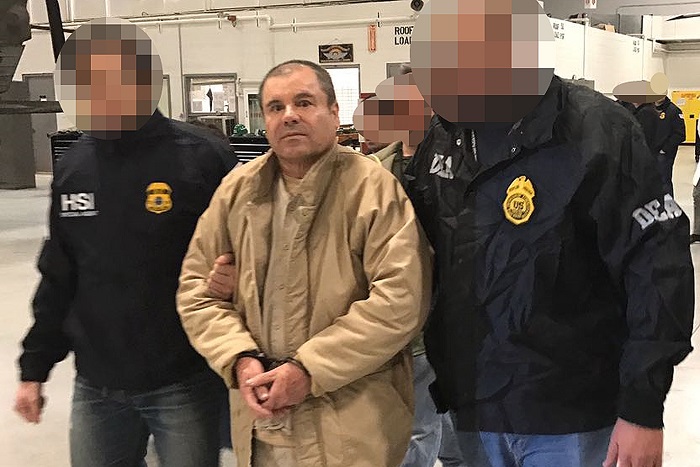 In this file handout photo released by the Mexican Interior Ministry on January 19, 2017 shows Joaquin Guzman

NEW YORK - Mexican mobster Joaquin "El Chapo" Guzman was convicted Tuesday of crimes spanning a quarter-century in a trial that laid bare his lavish lifestyle and penchant for extreme violence as the head of one of the world's most powerful gangs.

The 61-year-old former boss of the notorious Sinaloa cartel -- famed for his brazen escapes from Mexican prisons -- faces life in prison for smuggling tons of cocaine, heroin, methamphetamine and marijuana into the United States.

He was also found guilty on money laundering and weapons possession charges during a three-month trial in which witnesses described the mob boss beating, shooting and even burying alive those who got in his way.

"The verdict was a tremendous victory for the rule of law, for Mexico, the United States and other countries that have been victims of the Sinaloa cartel," Mike Vigil, former head of international operations for the US Drug Enforcement Administration, told AFP.

"Chapo Guzman was the world's greatest drug lord of all time," Vigil added. "He surpassed other drug lords, including Pablo Escobar."

In a statement, acting US Attorney General Matthew Whitaker said the case "demonstrated the extraordinary reach of the US government, our tenacity and commitment to pursuing kingpins like Guzman."

In a three-month trial that unfolded like a real-life telenovela, Guzman's ex-henchmen and a former mistress took the stand under the gaze of the stocky gangster, whose nickname is Spanish slang for "shorty."

His young wife, onetime beauty queen Emma Coronel, showed up almost every day in court to be with her husband.

After sentencing on June 25, Guzman is likely to be transferred to a so-called "supermax" prison in Colorado, sometimes called the "Alcatraz of the Rockies" and considered one of the most secure in the US.

His conviction is seen as a big win for the US, which failed to obtain the extradition of Escobar, the Colombian drug lord who was killed in a police operation in 1993.

Guzman's lawyer Bill Purpura said his client had expected the verdict but was a "guy who never gives up" and had vowed to appeal.

Another attorney for Guzman, Eduardo Balarezo, tweeted his client's conviction "will change nothing."

"El Chapo was arrested in 2014. The war on drugs is a complete failure," he said.