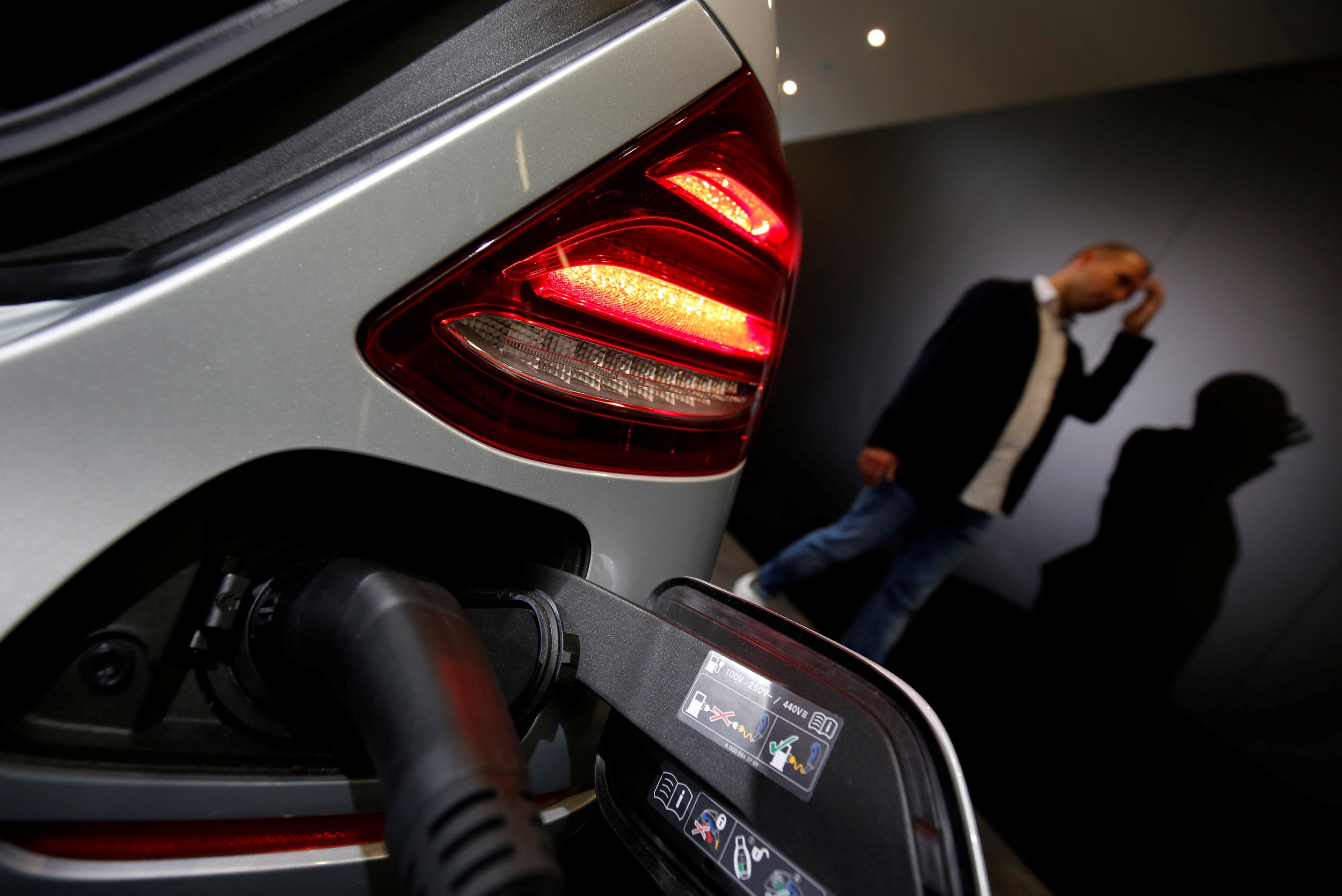 The charging cable of a Mercedes E 350 e is seen at the stand of German car manufacturer Mercedes at the Frankfurt Motor Show (IAA) in Frankfurt, Germany September 16, 2017.

FRANKFURT - European car bosses gathering for the Frankfurt auto show are beginning to address the realities of mass vehicle electrification, and its consequences for jobs and profit, their minds focused by government pledges to outlaw the combustion engine.

As the latest such announcement by China added momentum to a push for zero-emissions motoring, Daimler, Volkswagen and PSA Group made disclosures about their electric programmes that could give policymakers some pause.

Planned electric Mercedes models will initially be just half as profitable as conventional alternatives, Daimler warned - forcing the group to find savings by outsourcing more component manufacturing, which may, in turn, threaten German jobs.

"In-house production is almost irrelevant to the consumer," Daimler boss Dieter Zetsche told reporters and investors on the eve of the Frankfurt show, speaking in the midst of a German election campaign in which automotive jobs have loomed large.

Volkswagen, for its part, said it was seeking new global supplier contracts to source 50 billion euros (R790-billion) of electric car content including batteries, which are not yet manufactured competitively in Europe.

VW diesel emissions-cheating exposed by US regulators triggered global public outrage, dozens more investigations into test-rigging by the wider industry and a push by some lawmakers to ban diesel and eventually all engines.

Tesla shares jumped nearly six percent on Monday after a Chinese minister said it was a question of when, not if, Beijing bans fossil-fuel cars, tightening the rhetorical noose around the combustion engine. France and Britain have promised its outright abolition by 2040.

But PSA, the maker of Peugeots and Citroens, said it was concerned about the risks if consumers are left behind in the rush, and a new generation of battery cars does not sell.

"If it doesn't gain acceptance in the market, then everybody - industry, employees and politicians - has a big problem," PSA Chief Executive Carlos Tavares said in a pre-show interview with German weekly Bild am Sonntag.

While Tesla has carved itself a successful premium niche, electric vehicles have yet to penetrate volume markets, with the heavily subsidised exception of Norway, and still account for less than one percent of global car sales.

Automakers have sought to adapt to the changing tide - and in some cases distance themselves from "dieselgate" - by announcing multibillion-euro investments in electric cars, underpinned by plans to sell millions within a decade.

A year into the scandal, VW unveiled plans to develop 30 new electric cars and sell two million-three million annually by 2025. On Monday it upped the goal to 80 models and said it would need four times the capacity of Tesla's "gigafactory" to supply their batteries.

Since the battery is the single biggest-value item in an electric car, however, experts point out that mass adoption would shift business and jobs from European suppliers to China, which already dominates the automotive power-pack market.

According to consulting firm AlixPartners, electric drivetrains including batteries require 40 percent less manufacturing labour than mechanical ones. That would hit 112,000 jobs at European suppliers, even before any outsourcing.

A phase-out of combustion engines by 2030 could cost 600,000 jobs in Germany alone, the country's Ifo economic institute has warned. Chancellor Angela Merkel, on course for re-election on September 24, said she was "no friend of bans", in a Berliner Zeitung interview published on Tuesday.

Any deepening of the doubts surrounding mass electric car uptake could vindicate Fiat Chrysler CEO Sergio Marchionne - one of the few car bosses who has largely resisted the plug-in vogue.

"My aversion to electrification was based on pure cost issues," Marchionne told analysts recently, predicting that stubbornly high battery costs would combine with tightening combustion-engine regulation to choke off overall sales.

"There's going to be a huge increase in prices in 2021-22 if effective electrification becomes as widespread as people expect," Marchionne said. "That, based on everything I know in terms of economics, will cause a shrinkage of demand."