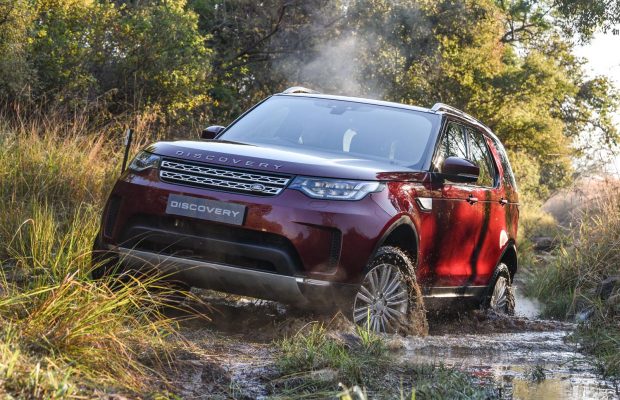 JOHANNESBURG – Land Rover South Africa launched the all-new Discovery on the motherland and it was quite the occasion. Now in its fifth generation, the new Disco 5 (hence the 5) as it might be known in some circles, will certainly get tongues wagging, especially the rear end design. However, its capability as an off-roader remains fully intact, if not improved even. And its interior comfort levels have gone exceptionally high.

Let me skip to an exercise that might illustrate this point. Out in the bundus with little in the form of civilisation, we strapped a 480kg trailer (Disco 5 has a towing capacity of 3,500kg) to the rear of the Disco 5 and headed through a river. A few touches with the finger and All-Terrain Progress Control (ATPC) is accessed. The system basically allows the car to semi-autonomously crawl through an off-road obstacle, with driver’s only input being steering. It is the best and easiest off-road crawling system we’ve ever encountered. Remember this is a permanent 4-wheel-drive with Front Axel open Differential, Hill Descent Control with Off-Road ABS and Hill Launch Assist among others. Be careful what model you choose though, because the fancy, extra-capable Terrain Response 2 4×4 system is an R11,800 option on most models.

With a wading depth of 90cm (yes, almost a metre), the Disco 5 is also a class-leader when it comes to getting into deep waters and getting out safely. Height-adjustable for either that sort of thing or lowering for normal driving/ loading activities, the car’s systems are designed to assist even the first-timer in using their car to its full effect. You don’t need an honorary doctorate to operate it. Another good example is the towing tech, which allows for drivers to reverse straight into the towing ball. All you do is adjust for height, plug in the peripherals and you are good to go.

As expected, the Disco 5 has a 7-seat configuration. Unfortunately it does not come standard; you pay for it as a R38,000 option. And while it does not offer the same level of “theatre view” perspective as the Disco 4, it does give the passengers ample seating space. Adults of up to 1.8m tall can sit comfortably for long periods of time. I know, because I tried it myself. Adjusting those seats to fold flat and make way for extra luggage is a matter of pressing some buttons. Easy peasy.

Back inside, Jaguar Land Rover’s InControl Touch Pro infotainment system accesses and controls all the functions related to infotainment, such as music (radio/ USB/ Bluetooth) through the Meridian sound system, satellite navigation, climate control and apps. There are over 30 smart phone apps (both Android and iOS) associated with this vehicle, including one that shows you how much fuel there is and where to find parking. A lot of the infotainment system can be accessed through a full colour 20.3cm touch screen. Up to six 12V charging points ensure the car is perfectly equipped to cope with the demands of the most connected families, while as many as seven USB sockets (up to nine when the rear seat entertainment is fitted) allow passengers in each row to power their smartphones or tablets simultaneously.

Land Rover launches the Disco 5 with two new engines, one petrol, the other a diesel. Both displace 3.0-litres in V6 format. The petrol is supercharged and makes up to 250kW of power, and 450Nm of torque, giving it some good thrust on take-off and overtaking. Its maker claims a fuel consumption figure of 11.3 litres per 100km. The turbo diesel produces 190kW and 600Nm of torque, which lets it drive extremely smoothly and effortlessly. On top of that it helps save fuel and adds many kilometres to trips. Assisting things along is the standard 8-speed automatic gearbox.

Expectedly the Disco 5 rides like an off-roader, with a slightly wonky but comfortable feel. Land Rover admits this is not a sports SUV, so don’t wait for rigidity, because it will not arrive. What it is is a premium family vehicle that can sit 7 people in absolute pleasure, and go into some serious off-road excursions. In fact, adventurers Kingsley Holgate and his son Ross will be driving two of these cars in their next expedition from South Africa to the furthest eastern point of in Africa (Ras Hafun, Somalia) in September. It will be rough, it will be muddy, it will be bumpy, it will be treacherous, it will be far. And they chose a Discovery 5 for it.