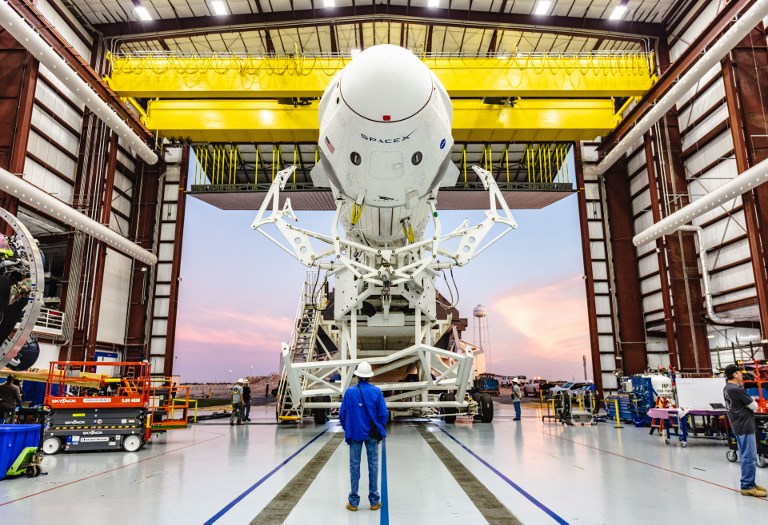 In this file photo taken on January 29, 2019 and obtained from NASA shows the SpaceX Falcon 9 rocket with the company’s Crew Dragon attached, rolling out of the company’s hangar at NASA Kennedy Space Center’s Launch Complex 39A.

WASHINGTON - NASA on Friday gave SpaceX the green light to test a new crew capsule by first sending an unmanned craft with a life-sized mannequin to the International Space Station.

A Falcon 9 rocket from the private US-based SpaceX is scheduled to lift off, weather permitting, on March 2 to take the Crew Dragon test capsule to the ISS.

NASA signed contracts in 2014 with SpaceX and Boeing for the companies to shuttle US astronauts to the ISS.

This will be the first time the US space agency lets a private-sector company transport their astronauts.

NASA ended its space-shuttle program in 2011 and since then has relied on buying spots on Russian Soyuz rockets to send US astronauts to the orbiting ISS.

"This is an absolutely critical first step that we do as we move towards returning the crewed launch capability back here to the US," said Gerstenmaier, speaking at a press conference in Cape Canaveral, Florida.

The March 2 flight will be identical to a flight that is set to take two astronauts to the ISS later in the year, possibly in July.

The Crew Dragon capsule has seven seats. It should dock with the ISS on March 3, then detach and return to Earth on March 8.

"I guarantee everything will not work exactly right, and that's cool, that's exactly what we want to do," said Gerstenmaier.

"We want to maximize our learning so when... we're ready to go do a real crewed mission, and it'll be the right safety for our crews."

SpaceX has already made more than a dozen unmanned trips since 2012 carrying supplies to the ISS with the cargo version of the Dragon capsule.

But the safety criteria for manned flights are higher, and NASA said that the Crew Dragon still has some problems, including with its parachutes.

"It's a really big deal for SpaceX," said Hans Koenigsmann, vice president of the company founded by billionaire Elon Musk.