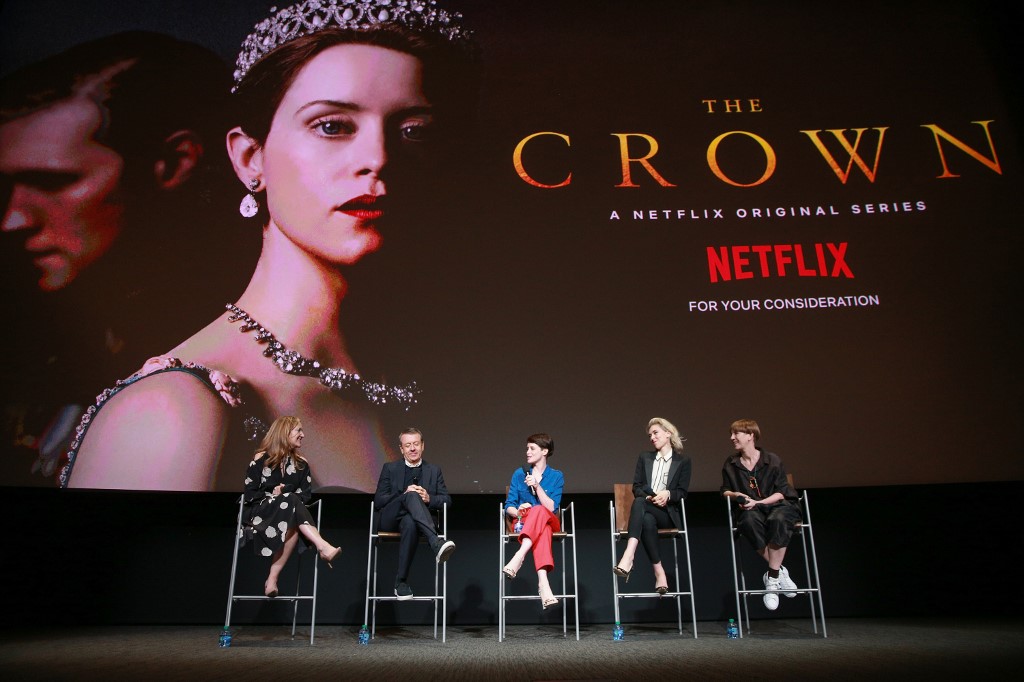 Krista Smith, Peter Morgan, Claire Foy, Vanessa Kirby and Jane Petrie speak onstage during the For Your Consideration event for Netflix's "The Crown".

LONDON - The fourth season of Netflix hit "The Crown" has stirred controversy in Britain, where its treatment of the heir to the throne, Prince Charles, has been criticised for taking too much artistic licence.

The series about the long reign of Queen Elizabeth II has turned its focus in recent episodes to the doomed marriage between Charles and his first wife, the late Princess Diana.

In the most recent season, British actress Emma Corrin portrays the princess from her first meeting with Charles as the young Lady Diana Spencer in 1977.

As the show develops, she is forced to contend with an increasingly unhappy marriage and her husband's infidelity with his now wife Camilla Parker-Bowles.

But despite the series' huge popularity, show creator Peter Morgan has been accused of inventing storylines without warning viewers that they are in fact fiction.

This facet of "The Crown" has left viewers furiously fact-checking after watching.

And while writers of drama depicting real events routinely imagine scenes that could have taken place, for many critics, Morgan has gone too far.

Royal author Penny Junor told AFP the way the series shows Charles continuing his relationship with Parker-Bowles throughout his marriage was simply not true.

In fact, "they did not see one another for five years", said Junor, who has written a biography of Charles.

The show "makes Diana out to be a victim and Charles a villain" whereas "the truth is they were both victims", she said, adding that it was also untrue that Diana's bulimia coincided with the start of her relationship with Charles.

Royal biographer Hugo Vickers, meanwhile, has called it "totally one-sided" in its depiction of Charles and Diana and has also taken issue with its portrayal of the queen's husband Prince Philip.

In one scene from the latest season, Philip tells Diana that if she breaks away from the royal family it won't end well.

"I hope that isn't a threat, Sir," she replies.

The scene, according to Vickers, "supports the scarcely credible rumours, still fuelled by the internet, that Diana's fatal car crash in a tunnel in Paris in 1997 was a murderous 'hit'".

Other episodes have seen Philip refusing to kneel at the queen's coronation, depicted as a philanderer and being accused by his own father of being responsible for the death of his sister Cecile in a plane crash.

The storylines were described by Vickers, writing in the Daily Mail, as "as wrong, wrong, and monstrously wrong".

Historian and author Ioanis Deroide, however, said that he sees the show's portrayal of the relationship between Charles and Diana as "reasonable".

Deroide said the public response was due to the "emotional charge" that still surrounds events in the series -- and with memories still fresh of Diana's ultimate demise.

Junor said she regretted the "damaging" storyline about Camilla and Charles, who has spent his life waiting to succeed his mother.

The couple have been largely rehabilitated in the public eye since their relatively low-key wedding in 2005.

"There are many people in Britain and across the world who will regard 'The Crown' as an accurate historical record... It is not history. It's drama," Junor added.

The Mail on Sunday newspaper has called on Netflix to make it clear "The Crown" is a work of fiction.

The article received support from Culture Secretary Oliver Dowden who said he feared "a generation of viewers who did not live through these events may mistake fiction for fact".

Oscar-nominated actress Helena Bonham Carter, who plays the queen's late sister Princess Margaret, has also said the show has a "moral responsibility" to tell viewers it is a drama, not historical fact.

For Deroide, however, despite the "impressive mimicry", there is no way of mistaking the series and its star-studded cast, for a documentary.

"The Crown is just one element among many that will allow the British to make up their own minds about the royal family," he said.

"I don't think it alone can make Charles look like a nice guy or the other way around."