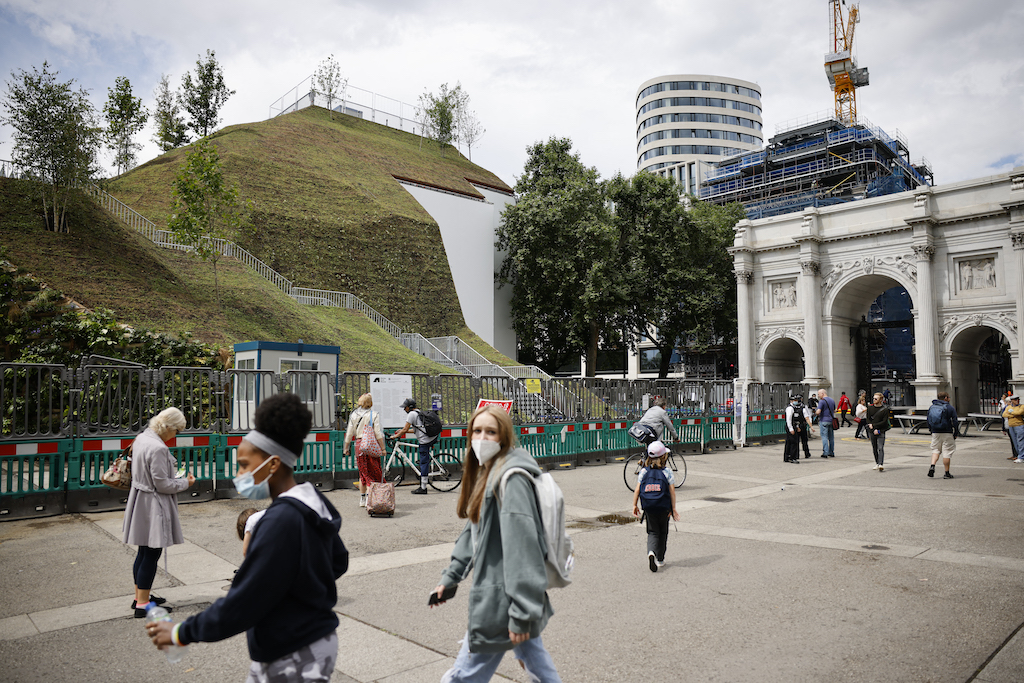 Pedestrians walk past the Marble Arch Mound, a new temporary attraction, next to Marble Arch in central London. AFP/Tolga Akmen

LONDON - Rising from a busy roundabout in central London, it was meant to be a draw for tourists who have largely stayed away from the British capital during the coronavirus pandemic.

But visitors to the 25-metre high Marble Arch Mound have been offered refunds after it opened on Monday, amid widespread disappointment and a great deal of derision.

Westminster Council admitted the grass-clad viewing platform, which was supposed to provide panoramas across the city was "not yet ready for visitors".

"I'd call it a white elephant or maybe a grass-covered white elephant," George Smith told AFP as he sheltered from the rain in the shadow of the man-made mini-mountain.

"This mound just appears out of nowhere and it doesn't really fit with the aesthetic of the city," the London filmmaker added.

It has been billed as "London's newest outdoor attraction".

But the distance between the company's vision and reality, as the cat's cradle of scaffolding has grown and been covered with trees and turf, has been met with bewilderment.

Photographs in British newspapers and on social media included a less-than-spectacular vista from the top of building rubble and recycling bins.

With visitors who previously booked tickets being offered refunds and no further tickets being given until improvements are finished, only a trickle of visitors were making their way up the stairs of the mound on Wednesday.

Amid intermittent showers, families and day-trippers climbed the steel steps of the structure in colourful anoraks, gripping umbrellas in the wind.

The views from the mound, which is designed to offer a panorama of the capital's Oxford Street shopping district, Hyde Park, Mayfair and Marylebone have also come under criticism.

The view of Marble Arch itself and Oxford Circus to the east are blocked by surrounding trees, with summer providing a dense green canopy on the edge of Hyde Park.