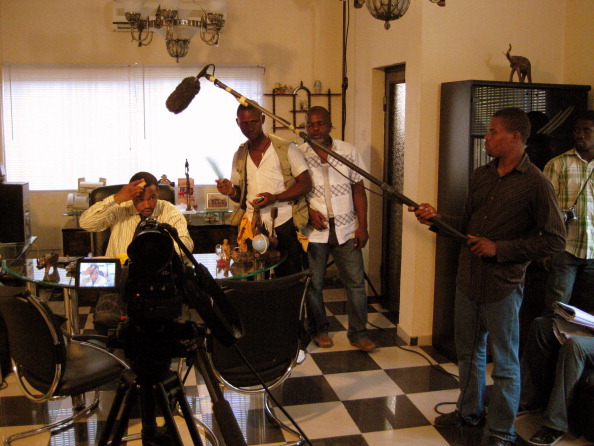 A Nigerian film crew prepares to shoot a scene in Lagos, Nigeria. The Nigerian film industry, nicknamed Nollywood, has vaulted past the United States to become the second largest in the world.

LAGOS - The who’s who of Nigeria’s movie industry, dubbed Nollywood, gathered in Lagos to celebrate its 20th anniversary.

Over the years, Nollywood has rapidly grown despite many challenges.

What started out as just a recycling venture – trying to put to use an excess amount of VHS tapes – gave birth to one of Nigeria’s biggest industry.

Providing jobs to more than 1.5million people and an estimated capital base of over $500 million, Nollywood has grown in leaps and bounds.

Nigeria is regarded by many as one of Africa’s top entertainment industries.

With a synergy between individuals in the performing arts and creative industry and marketers, this home grown entertainment – with its signature melodramatics themes and plots – is a household fixture.

Zik Zulu Okafor of the Association of Movie Producers said Nollywood has grown on its own with monies borrowed from uncles, sisters, brothers and parents.

"We have been able to create an industry. The time has come for the organised private sector to look into this industry and invest in it because we know if you invest in it Nollywood will grow.”

Despite these challenges, the industry has in the past 20 years positioned itself as the most viable information dissemination and image-making tool in Africa.

It has also transformed the production and distribution process and forced conversations and policy changes related to funding, structure, regulation and piracy.

The next 20 years are looking just as bright.

Collaborations with international filmmakers and Nigerians and other Africans in Diaspora are opening up more windows of opportunities.

Nollywood is currently the third-largest producer of feature films in the world, ranking behind only Hollywood in the US and India&39;s Bollywood revenue.