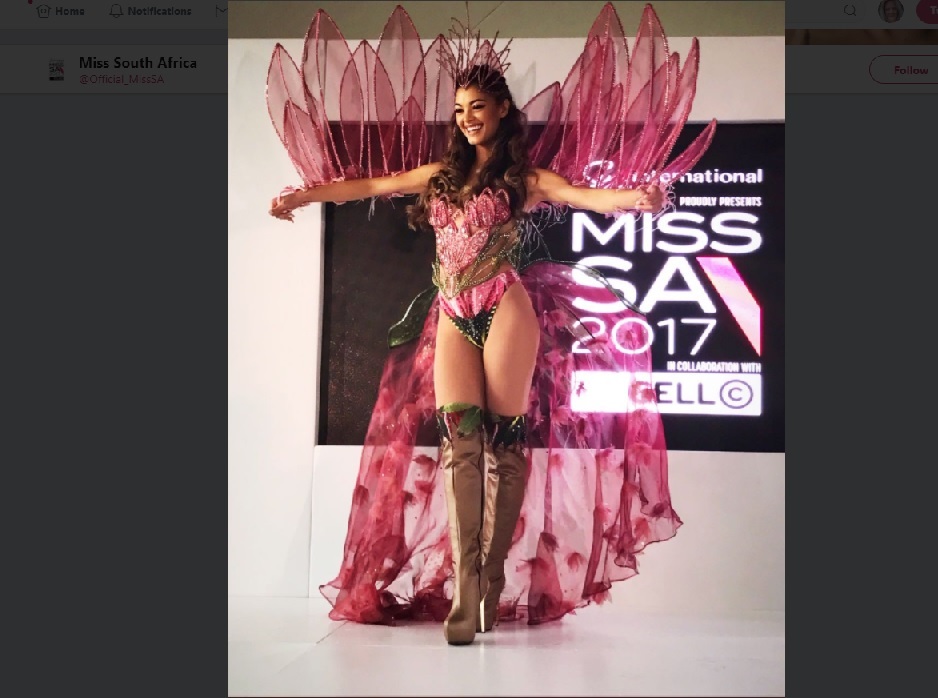 Inspired by the protea, @DemiLeighNP MissUniverse national costume was designed by The Costume Department. DemiForMissUniverse pic.twitter.com/dXB1DETF74

WATCH: What was the Miss SA gown designer thinking?

Nel-Peters’ national costume, which she showed off at her farewell, has been designed by Malikah Hajee and Lloyd Kandlin and their team at The Costume Department while Anel Botha has designed a number of outfits including the finale gown.

Say Hajee and Kandlin: “We were approached by the Miss South Africa Organisation’s pageant coach and stylist Werner Wessels to create the Miss South Africa national costume. Wessels had a vision of what he thought would be most effective. We then took his idea a step further and created our version of the South African national flower, the protea, which is also the official Miss South Africa emblem. We looked at the elements of the flower and colours and recreated it in a costume form.”

Botha, who is responsible for the Miss Universe finale gown, says she was inspired by what the Miss Universe Pageant is synonymous with – sophistication and glamour in a celebration of young women who are confidently beautiful.

We&39;re coming for the crown!

She says: "Demi-Lee&39;s Miss Universe gown reflects her beauty in a million ways and it also shows off her strength and her beautiful physique. It is a gown that will be remembered!"

At her farewell, Demi-Leigh also showed off another of Anel’s outfits that she will be wearing during the course of the build-up in the US to the Miss Universe finale.

Nel-Peters will be taking a piece of South African jewellery, designed by Miss South Africa sponsors, Jack Friedman Jewellers with input from her, as the national gift to Miss Universe. It is inspired by Namaqualand daisies and the map of Africa and is made with diamonds and gold and includes the artistic technique of vitreous enamelling. A quote by the late Nelson Mandela is engraved on the underside of the piece.