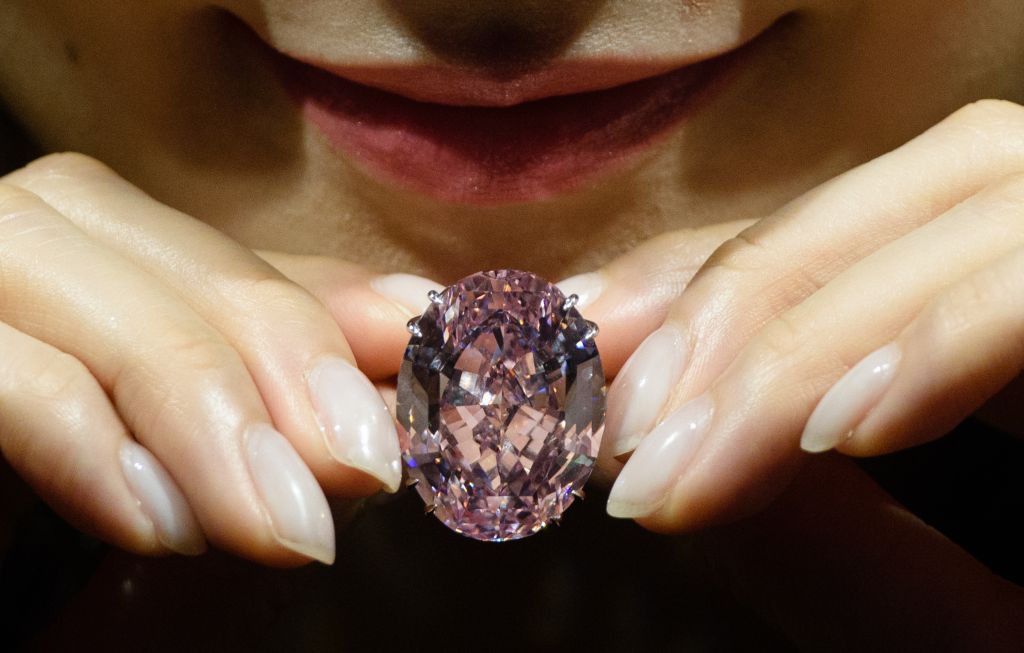 A model poses with a 59.60-carat oval mixed-cut pink diamond, known as 'The Pink Star', during a Sotheby's media preview in Hong Kong on March29, 2017, to promote its auction on April 4.

HONG KONG, China - A giant diamond named the "Pink Star" broke the world record for a gemstone sold at auction when it fetched $71.2-million (R977-million) in Hong Kong on Tuesday.

The 59.60-carat "Pink Star", the largest in its class ever graded by the Gemological Institute of America, was sold to the city's Chow Tai Fook jewellery chain.

"Sotheby's Hong Kong is very proud to have this record," its Asia chairman Patti Wong told AFP after the sale.

Bidding started at around $56 million. The sale lasted for five minutes and involved three bidders before the winning offer came by phone from Chow Tai Fook, prompting a round of applause.

Sotheby's auction house said it was "proud" of the sale.

The jewellery group is chaired by Henry Cheng, whose family is ranked third on Forbes' Hong Kong rich list with $17.9 billion.

The group has a large network of stores in China plus outlets in Hong Kong, Macau, Malaysia, Singapore and Taiwan, but is relatively unknown in the West.

It was 132.5 carats in the rough when it was mined by De Beers in South Africa in 1999, according to Sotheby's. The stone was cut and polished over two years by Steinmetz Diamonds and unveiled to the public in 2003 under the title of the "Steinmetz Pink".

The near-translucent rock was renamed after it was first sold four years later for an undisclosed sum to an unidentified buyer.

But Sotheby's was forced to take it back after that buyer, a New York-based diamond cutter, defaulted on the sale.

The auction house said it was confident of getting its money this time around.

"Of course, the buyer definitely has the financial capability," Wong told reporters, adding all three bidders were vetted and had a longstanding relationship with the auction house.

Sotheby's had previously said Hong Kong was the right place for the sale.

"Today Hong Kong has proven itself to be again the international sale centre," Wong said.

Asian buyers have been making record diamond purchases in the past few years.

The previous record for a jewel successfully sold at auction was $57.54-million in May 2016 for the 14.62-carat "Oppenheimer Blue" sold by Christie's in Geneva.