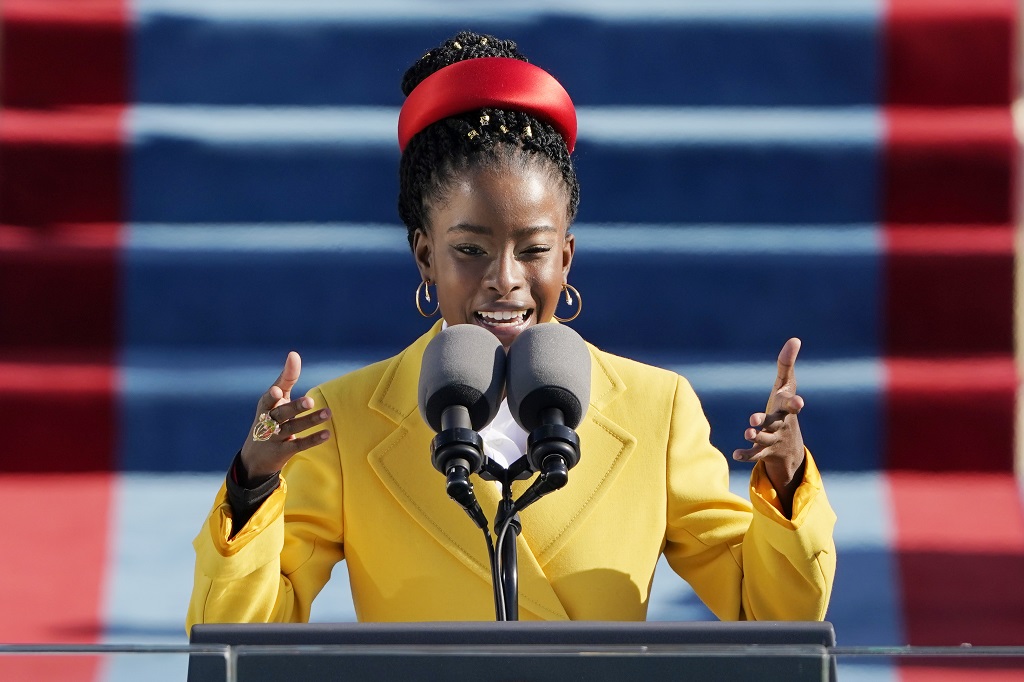 American poet Amanda Gorman reads a poem during the 59th Presidential Inauguration at the US Capitol in Washington DC on January 20, 2021. AFP/Patrick Semansky

WASHINGTON - Poet Amanda Gorman became a sudden star at age 22 at President Joe Biden's inauguration as she recited verse inspired by the Capitol attack, touching on how democracy "can never be permanently defeated."

Gorman was the youngest poet to recite at an inauguration, a role first given to Robert Frost by John F. Kennedy in 1961, after First Lady Jill Biden saw one of Gorman's readings and invited her to participate at the Capitol steps.

Gorman said that she had been writing a few lines a day but stayed awake at night out of a compulsion to complete her inauguration poem, "The Hill We Climb," following the January 6 ransacking of the Capitol by supporters of then-president Donald Trump who hoped to undo Biden's victory.

"We've seen a force that would shatter our nation rather than share it / Would destroy our country if it meant delaying democracy," she recited.

"And this effort very nearly succeeded / But while democracy can be periodically delayed, / It can never be permanently defeated."

Gorman, who graduated from Harvard University last year, was the first to hold the role of national youth poet laureate by the Library of Congress and earlier held a similar honour in Los Angeles, where she has started a non-profit group to promote literacy.

She has previously written about the struggle for racial equality and the #MeToo movement against sexual assault.

Showing both composure and joy as she took the podium moments after Biden, Gorman opened her reading by speaking of how "We the successors of a country and a time where a skinny Black girl descended from slaves and raised by a single mother can dream of becoming president -- only to find herself reciting for one."

Among her previous works, Gorman wrote "Tyrants Fear the Poet" to address the 2017 white supremacist march in Charlottesville, Virginia -- an episode that Biden said motivated him to challenge Trump, who had said the crowd included "very fine people on both sides."

In an interview with National Public Radio, Gorman said that she grew up with a speech impediment in which she could not pronounce certain letters -- a trait she shares with Biden, who has been open about his struggles with stuttering.