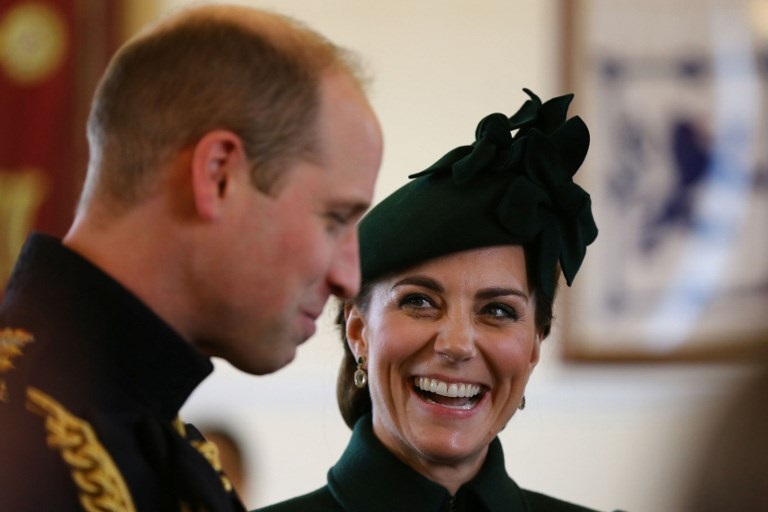 Britain's Prince William, Duke of Cambridge and Britain's Catherine, Duchess of Cambridge gesture as they meet unseen family members of the officers and guardsmen of the 1st Battalion Irish Guards.

Ardern said the focus of Friday's service and next month's royal visit was supporting the Muslim community, which was devastated when a self-avowed white supremacist killed 50 people at two mosques in a shooting rampage.

Ardern will address the service, which has the theme "We Are One" and will be broadcast on national television.

She said representatives from 59 nations, including Australian Prime Minister Scott Morrison, were attending the event, which is expected to draw tens of thousands of people.

The emphasis will be on the Islamic community, with an invocation ringing out across Hagley Park, speeches by Muslim leaders and a performance by Cat Stevens, the British singer who shunned stardom in the 1970s and became a Muslim, taking the name Yusuf Islam.

"This is an event that has affected New Zealand deeply, but it was our Muslim New Zealanders who were targeted in this act of hatred," Ardern told reporters in Christchurch.

"Rightly so, that will be reflected in the remembrance service."

She said William, the Duke of Cambridge, was "very keen to show his support for the city and the Muslim community as it emerges from this attack".

William will represent his grandmother Queen Elizabeth II, the official head of state of the former British colony.

"The visit will be another sign that this nation will always stand with those affected by the terror attacks, and the people of Christchurch," Ardern said.

The Royals have previously expressed sympathy for the attacks.

"The Duke will meet with those affected by the attack and will pay tribute to the extraordinary compassion and solidarity that the people of New Zealand have displayed in recent weeks," Kensington Palace said in a statement.

Ardern said William already had a strong connection with Christchurch and the surrounding Canterbury region after visiting in the wake of a devastating 2011 earthquake that killed 185 people.

William made a two-day visit to Christchurch following the quake to attend a memorial service. He and his wife Kate also visited the city in 2014.

After the mosque attacks, William, Kate, Prince Harry and wife Meghan sent a message that ended "Kia kaha", meaning "be strong" in Maori.

"No person should ever have to fear to attend a sacred place of worship," they said.

"This senseless attack is an affront to the people of Christchurch and New Zealand and the broader Muslim community. It is a horrifying assault on a way of life that embodies decency, community, and friendship."

Ardern has led efforts to support New Zealand's small, tightly-knit Muslim community in the wake of the attack.

As well as symbolic gestures such as donning a headscarf while comforting survivors, she has also moved to tighten gun laws and called for social media giants to do more to combat hate speech.

She said New Zealanders were "on a journey" to uphold their core values and her government wanted to take a leadership role in ensuring that happened.

"But our overriding values are ones of fairness, compassion and diversity."