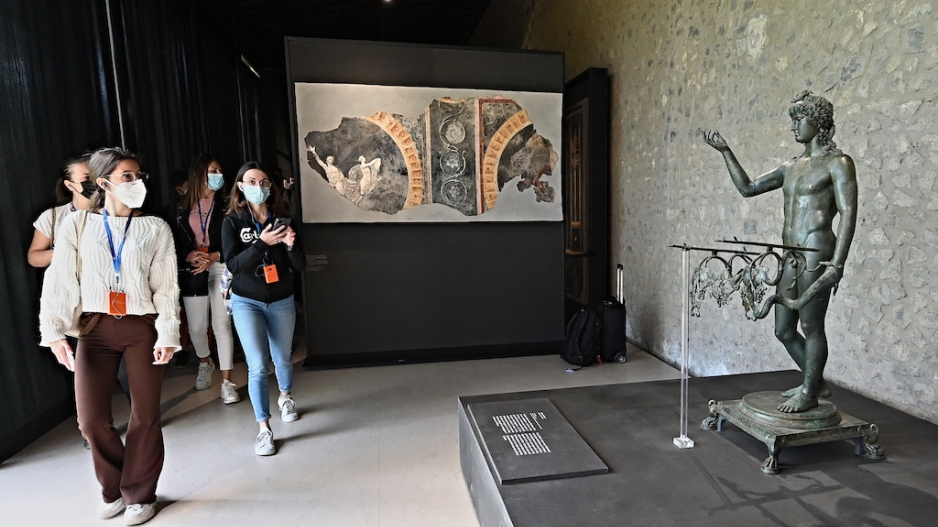 Visitors look at a sculpture of Ephebe lamp-holder, in Pompeii's site during a new exhibition entitled "Art and sensuality in the houses of Pompeii". AFP/Andreas Solaro

POMPEII - Raunchy scenes may redden faces at a new exhibition in Pompeii on art and sexuality in the ancient Roman city, where sculptures and paintings of breasts and buttocks abound.

Since those first digs in the 18th-century site, racy images have been found in taverns, thermal baths and private homes.

It became clear that "this is a city where sensuality, eroticism, are ever-present," Pompeii's site director Gabriel Zuchtriegel told AFP as he stood in front of statues of bare-chested Centaurs.

The discoveries initially caused "dismay, embarrassment, and curiosity, and were seen by some as a great opportunity to think about the relationship with their bodies and nudity in a very different way".

The Neapolitan King Charles VII, who financed the excavations, shut some of the more bawdy finds away in a secret cabinet in Naples, only showing them to those of proven moral standing, Zuchtriegel said.

That secret cabinet still exists today in the archaeological museum in the southern Italian city.

The exhibition runs until January 2023 and brings together some 70 works.