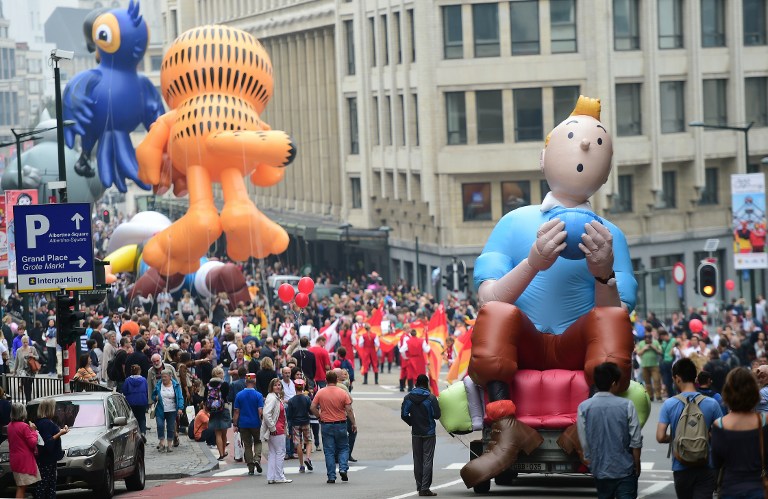 An inflatable of Belgian comics series character Tintin is paraded during the Balloon's Day Parade as part of the annual Comic Book Festival in Brussels on 6 September 2014.

PARIS - A watercolour of the graphic novel hero Corto Maltese has sold at auction for a record 391,800 euros ($485,500), just months after a Tintin strip set a new world high for a comic of 2.65-million euros.
The artwork for a 1979 French edition of Corto Maltese in Africa -- "Corto Maltese - Les Ethiopiques" -- went for more than twice the original estimate, the French auction house Artcurial said Sunday.
Maltese, a sophisticated sailor adventurer whose stories are set in the early decades of the 20th century, was the creation of the Venetian comic book writer Hugo Pratt.
Like his most famous character, Pratt (1927-1995) -- a cousin of the Frankenstein actor Boris Karloff --  was a restless cosmopolitan who divided his time between France, Britain, Argentina and Italy, and spent a large part of his youth in Ethiopia, where the adventure takes place.
Some 400 lots of comic art were sold at the auction in Paris on Saturday, Artcurial said, with the highest price fetched by a Tintin strip from "The Castafiore Emerald", signed by its creator Herge, going for 404,500 euros.
The Herge original that set a new work record in May was a two-page spread of 34 small drawings of Tintin and his faithful dog Snowy in some of their most famous scrapes.