Revealed: the mother (and father) of all flowers 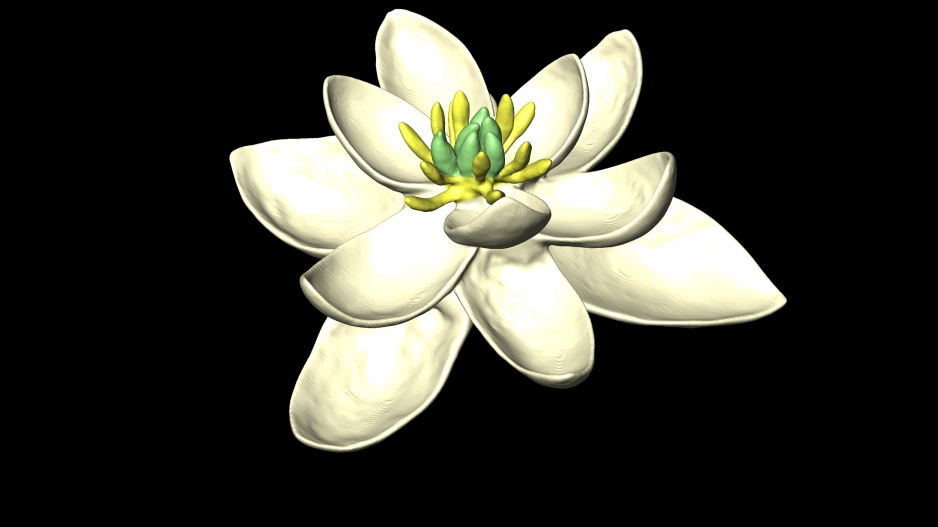 A 3D model of an ancestral flower reconstructed by a new study, showing both female (carpels) and male (stamens) parts, and multiple whorls (concentric cycles) of petal-like organs, in sets of threes.

PARIS - The first flower to appear along the path of plant evolution, during the time of the dinosaurs, was a hermaphrodite with petal-like organs arranged in concentric circles, researchers said.

The bloom had both male and female reproductive organs at the centre, surrounded by multiple layers or "whorls" of petal-like parts called tepals, arranged in sets of three per layer, they wrote in the journal Nature Communications.

The reconstruction, based on the largest dataset of flower traits ever assembled - from 792 existing species - challenges scientific assumptions that the ancestral flower would have had its sex organs and "petals" arranged in a spiral.

Most flowers today have four "whorls" - the outer leaves or sepals, followed by the petals, which enclose the male organs called stamens, with the female organs or carpels at the centre.

The ancestral flower likely did not have separate sepals and petals, instead sporting tepals - a mix between the two - around the sex organs at the centre.

READ: New evidence that volcanic eruptions triggered the dawn of the dinosaurs

Modern flowers with tepals rather than petals include tulips and lilies.

"The results are really exciting," said Maria von Balthazar, a floral morphology expert at the University of Vienna, who took part in the research.

"This is the first time that we have a clear vision for the early evolution of flowers across all angiosperms" - the scientific term for flowering plants.

We still do not know the flower's colour, what it smelled like, or its size - presumed to have been less than a centimetre in diameter.

Experts believe that land plants emerged from ancestral water plants about 470 million years ago - more than three billion years after the first life is thought to have emerged when Earth was about a billion years old.

The first seed plant - the group that includes flowering plants and cone-bearing ones - likely emerged about 320 million years ago, when there were diverse animals on land and at sea, but not yet dinosaurs, mammals or birds.

Since then, the first flower has evolved into at least 300,0000 species that include almost all plant types used by people for food, medicine and other purposes, said the research team.

Flowering plants represent about 90 percent of all plants on Earth.

In 1879, evolutionary scientist Charles Darwin famously described the flower's rapid rise and diversification during the Cretaceous geological era as an "abominable mystery".

The team combined DNA data and a vast library of plant traits to compile a detailed evolutionary tree leading back to the last common ancestor.

"The flower grew (on) only one type of plant, the ancestral species of all living, flowering plants," co-author Herve Sauquet of the Universite Paris-Sud in France told AFP.

"Not many people have looked into the question of what kind of plant this was, but according to previous work it was probably a small tree or shrub."

The team stressed that although their reconstruction presents the closest picture of the ancestral flower yet, much remains to be uncovered by future research.