Russian goat who made unlikely friends with tiger dies 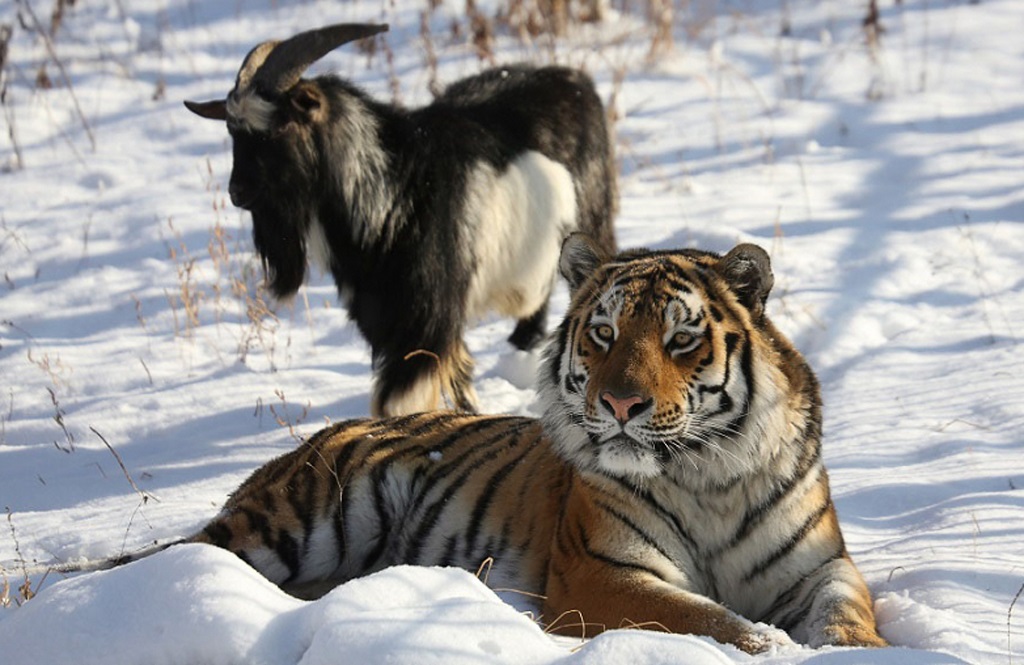 A tiger, resting close to a goat named Timur in an enclosure at the Primorye Safari Park. Timur has now died.

MOSCOW -  A Russian goat named Timur whose unusual friendship with a tiger won him nationwide fame, has died, the director of the safari park where the pair lived, said Friday.

"Timur's heart stopped beating on November 5," said Dmitry Mezentsev, director of a safari park outside the Pacific port of Vladivostok.

The billy goat, believed to be around five years old, was cremated and will be buried "with full honours", his keeper Elvira Golovina said in a statement.

The goat died of natural causes but his health deteriorated following an altercation with a male Siberian tiger he unexpectedly befriended in 2015, Mezentsev said.

In a story that captivated Russia, Timur was sent to the safari park as live prey for Amur the Siberian tiger.

But the tiger did not touch the billy goat when it entered the enclosure in late 2015 because the goat did not show any fear.

Mezentsev, who studies tigers and leopards, at the time described the unlikely friendship as nothing short of a miracle and a "sign from above" for people to be kinder to each other.

Timur and Amur slept in the same enclosure, ate and played together. The tiger attempted to teach the goat how to catch prey. They also playfully head-butted and chased each other.

But the friendship soured as the goat grew more audacious and started challenging the big cat.

"Timur hassled the tiger for about a month," Mezentsev said.

In January 2016 the tiger lost patience after the goat stepped on him. He grabbed Timur and threw him off a hillock.

The frenemies were separated but Timur's health took a turn for the worse.

He started limping and lost some of his zest for life, while remaining "cheeky", Mezentsev said.

The park sent the goat to Moscow for treatment but he never fully recovered from the attack by the tiger, who is still alive and living at the safari park.

The owners now plan to erect a bronze monument on Timur's grave.

Many Russians said online they were saddened by his passing.

"Fearless Timur, you will forever remain in our hearts," said one mourner.