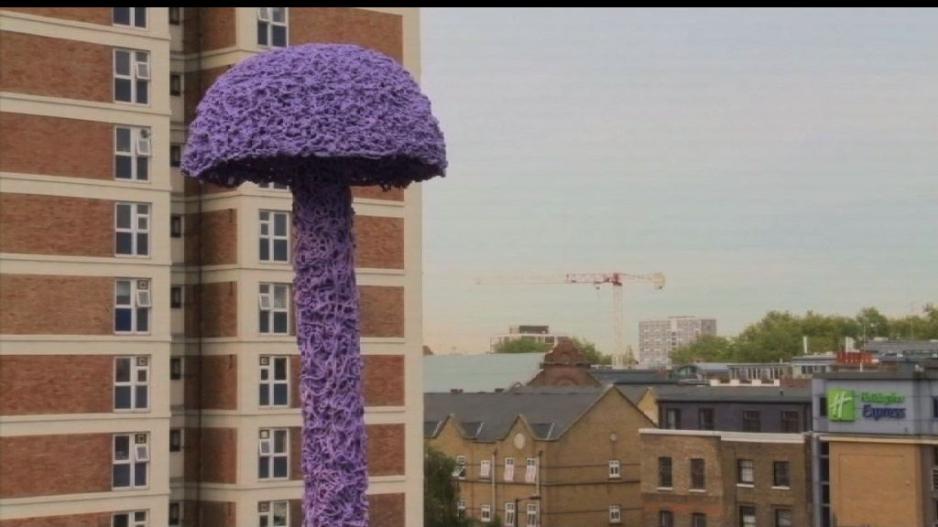 LONDON - Street art in London has helped regenerate poorer areas in the city, transforming them into much more fashionable spaces.

One of those involved in the UK&39;s street art movemen is Christiaan Nagel, a South African artist known for his illegal art installations. eNCA&39;s UK correspondent Natalie Powell met with the artist, known in some circles by another name - the Mushroom Man.

Christiaan stumbled on the technique whilst in South Africa, and later took his mushrooms to England and began guerrilla installations. His pop art can now be found all over the world, but it&39;s in London that he&39;s really left his mark.

He says, "Mostly I&39;ve done illegal installations, unsolicited installations, I climb buildings late at night and stick them on top of these buildings. My initial idea was for people to wake up one morning and go to work and see all of these mushrooms spouting about the streets"

He&39;s often appointed to install his mushrooms on the buildings of businesses in the East of the capital, those who want to be in keeping with the area.

Christiaan says, "Street art and graffiti like this can now be found all over this part of London. It&39;s no longer a taboo subject and many murals have actually been professionally commissioned.

"And a lot of the artists in the area would argue that they&39;ve done a lot to regenerate what was once a fairly poor area.

"It&39;s become a really hip place to live…a lot of young money coming in here and I think street art has had a big influence on that "

Christiaan has also managed to take some of his art back home. "I did about 8 in Cape Town last year, most of them long streets and I did about 4 in Johannesburg over a weekend recently." he said.

Now considered something of value, street art is becoming more and more acceptable.

But even so, Christiaan says his illegal guerrilla  installation will continue - because as an artist, he&39;s keen to push boundaries.